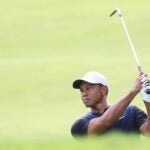 Tiger Woods will need a solid second round to make the weekend at Winged Foot.

Players took advantage of forgiving U.S. Open conditions on Thursday at Winged Foot, but that’s not the story on Friday as the U.S. Open cut line looms.

So far in Round 2, Winged Foot has toughened up, in large part due to some trickier pin locations, firmer greens and, perhaps most importantly, stronger wind.

Justin Thomas held the first-round lead after a five-under 65, and 21 total players were under par on Thursday. Eleven more were even par. But in the morning wave on Friday, only two players finished under par. Bryson DeChambeau eagled his last hole to shoot a two-under 68, and Bubba Watson shot a one-under 69.

DeChambeau, at three under, is now the clubhouse leader as the afternoon waves begins to tee off.

The top 60 players and ties make the cut at the U.S. Open. As of 2 p.m. ET, the cut is projected to be five over, although based off the morning wave and the potential for winds to pick up and greens to get firmer, that cut could easily move higher.

UPDATE: At 5:30 p.m. ET, the cut is projected at six over. Tiger Woods, Jordan Spieth and others are in serious danger of missing out on the weekend.

Tiger Woods started his U.S. Open with an up-and-down performance, making lots of birdies but many more bogeys. He finished his round on Thursday with a bogey and a double bogey and shot three-over 73. Woods will need a strong round on Friday to avoid missing the cut. Check out the U.S. Open leaderboard here.

(This post will be updated throughout Friday’s second round.)

Upgrade your golf bag in our Pro Shop