US Open 2016: History of Stimpmeter Starts at Oakmont 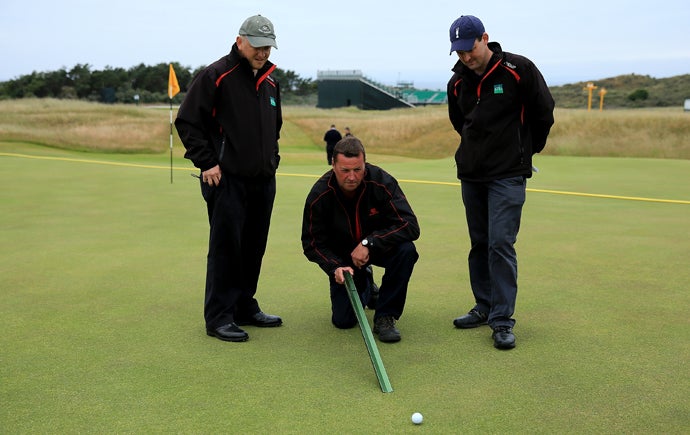 Muirfield course manager Colin Irvine and staff from STRI the R&A Agronomists check the pace of the greens with a Stimpmeter during a practice round prior to the 2013 Open Championship.
David Cannon/R&A

At the 1935 U.S. Open, with the turf at Oakmont firm and golf shots running fast, Gene Sarazen putted off a green into a bunker.

It must have been a lonely moment for the Squire.

But Edward Stimpson felt his pain.

An amateur golf stalwart who played collegiately at Harvard, Stimpson was a spectator to Sarazen’s misfortune, and he saw in it the symptom of a larger problem: greens so speedy that they risked being unfair.

“(Sarazen) had two putts on that green,” Stimpson would note years later. “But they weren’t in succession.”

Necessity may be the mother of invention.

In this case, though, it was more like indignation—and it all started at Oakmont, site of this year’s second major.

Off Stimpson went to the drawing board and back he came with a barebones gizmo: a wooden track, set at an angle and fit for a golf ball, with a notch that ensured a consistent release point. Let a ball go from it, and the rollout, in feet, was a measure of green speed. Like Hans Geiger with his counter and Robert Bunsen with his burner, Stimpson now had something that bore his name.

(Hint: it wasn’t called the Edwardo-meter.)

Stimpson never patented the Stimpmeter, but he did present it to the USGA, which was happy to receive it but in no special hurry to propagate its use.

That happened decades later; with the spread of improved maintenance equipment and the advent of new grass strains that could withstand closer cuts, quantifying green speed made ever-increasing sense.

MORE: Everything You Need to Know About Oakmont

The Stimpmeter enjoyed its national championship debut at the 1976 U.S. Open at the Atlanta Athletic Club, where the greens Stimped at an average of just over 7. That wasn’t outlandish for the era. At the time, according to the USGA, the average speed of greens around this country measured roughly 6.6 to 7 feet. (By century’s end, pro tournaments were pushing closer to 10.)

In 1978, the USGA began selling an aluminum version of the Stimpmeter—not to ordinary golfers but to a targeted audience of clubs, superintendents and tournament organizers. The same stricture on sales endures today.

Once a curiosity, the Stimpmeter has become a fixture of the modern game, and a standard tool in golf course maintenance and tournament setup. It is also the cause of occasional harrumphing from those who complain of its misuse.

And to hear some critics tell it, shortsightedness has too often ruled the day.

The Stimpmeter, as they see it, has been partly to blame by inspiring unhealthy competition, an obsessive race for greater green speeds that can be just as bad for grass as it can be for golfers.

That was never Edward Stimpson’s intent.

“I gave the USGA the idea,” he once said. “I didn’t ask for anything then or later. I was just interested in helping golf.”

Like the wheel, the Stimpmeter performs its function with such beautiful simplicity that you wouldn’t want to reinvent it, even if you could.

Over the years, though, it has been improved.

The mid-70s move to aluminum marked an evolution; aside from being stronger, longer and lighter-weight, those new meters featured tapered ends that minimized bouncing as the ball rolled from the track onto the green.

Another leap forward came in 2013, when a USGA engineer named Steven Quintavalla developed a Stimpmeter with a second notch, set lower on the chute. The lower release point yields shorter run-outs, which are critical for getting accurate readings on greens with limited flat areas.

As for Stimpson’s original creation, it remains in the possession of the USGA, which keeps the humble wooden chute at its test center in New Jersey, as much for posterity as anything else.

It won’t be put to use at this year’s U.S. Open, but its aluminum descendent will.

Every day of the week, two trained agronomists, each armed with a blue metal Stimpmeter, will light out for the championship layout, one working the front nine, the other the back, gathering Stimp readings in the standard approved manner: by rolling six balls per location, three in each direction, and averaging those measurements to get the speed.

They won’t be after a target number. They’ll be looking to set speeds suited to the venue, lightning-quick, of course, but ultimately, fair.

This being Oakmont, someone might still putt off the green.