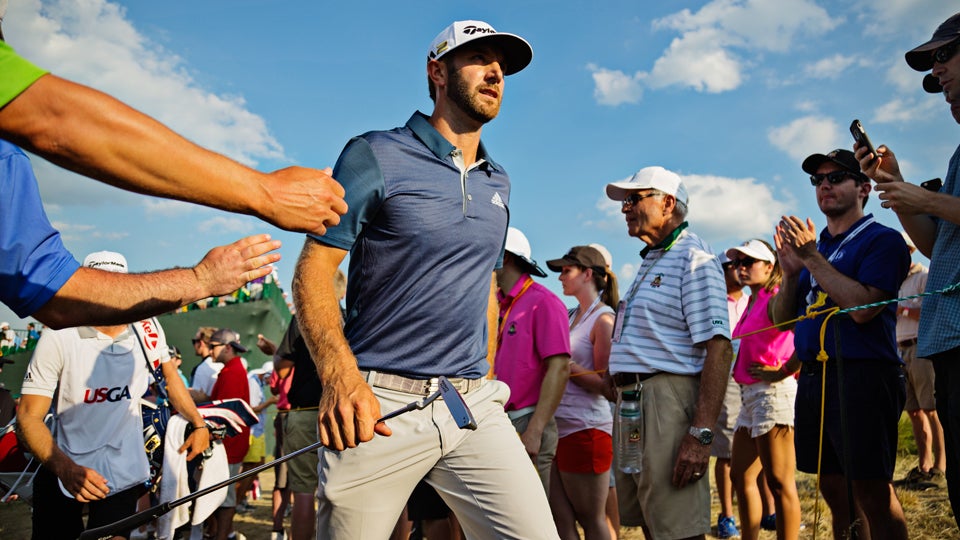 Dustin Johnson finally got his first major victory, and a one-stroke penalty he received after his round didn't even matter in the end.
Al Tielemans for SI

OAKMONT, Pa. — How did the United States Golf Association get it so horribly wrong on its biggest stage?

The 116th U.S. Open was nearly marred forever by bad officiating. That happens in other sports but seldom in golf. Luckily for all involved, Johnson hit two of the most clutch shots you’ll ever see on the 72nd hole of a tournament and won the Open by four shots. Yeah, that’s right. He won by four. The USGA’s final official tally will say he won by three after it assessed him a one-shot penalty because his ball moved at address on the 5th green. But we know better. Johnson really won by four.

That questionable penalty was assessed after the official walking with Johnson and Lee Westwood initially deemed that Johnson should not be penalized. Johnson knew he didn’t make the ball move and Westwood didn’t say otherwise, either.

Two things here are unfathomable. One, it took almost two hours (and six holes of play) for the USGA to reconsider, show up at the 12th tee and inform Johnson that his 5th-green incident would be reviewed after the round. Thanks for that utterly distracting news.

How’s a guy supposed to play on? You may as well tell him, “Hey, somebody in your family has taken ill. We’ll tell you the details after the round.”

Two, the controversy cast a shadow over the entire finish. Neither Johnson nor Shane Lowry nor anyone else knew if his score was accurate.

Maybe replay works in football and baseball. Debate that among yourselves. But those sports halt the action until an outcome is determined when replay is used. In golf, the competitors played on into the unknown.

Imagine the fallout if Johnson finishes in a tie with any other player and then is informed that he lost the Open because some USGA officials didn’t believe Johnson and ruled counter to what the official who was on the spot ruled. It’s like the Internal Revenue Service telling you what you can deduct and then when you include those deductions on your income taxes, they say you’re wrong and slap a penalty on you.

The whole complicated process apparently turned Johnson into some kind of sympathetic folk hero because the fans at Oakmont Country Club were suddenly cheering Johnson on wildly over the closing holes. Johnson, who missed a PGA Championship playoff when he was assessed a penalty stroke for grounding his club in a fairway bunker on the final hole, was curiously adopted as a new fan favorite. It was weird, yes, yet it felt right.

The USGA’s method of officiating in a major championship has a major problem, pun intended, and it was exposed in a major way. There was very little support for the association’s actions from other players. Twitter may have sprained its lateral meniscus after the Fox Sports broadcast team explained what was going on.

“This is ridiculous,” tweeted Rory McIlroy. “No penalty whatsoever for D.J. Let the guy play without this crap in his head. Amateur hour from the USGA… This isn’t right for anyone on that course. If it was me, I wouldn’t hit another shot until this farce was rectified.”

From former PGA Tour player Bob Friend, who was working on site all week: “Such a great U.S. Open and now there is this pall over it.”

From former PGA champion Keegan Bradley: “These are the guys who make our rules? #scary.”

Justin Thomas: “Starting to think I may have a chance at +8 if these rulings keep up.”

From Jordan Spieth, in part: “DJ doesn’t address it. It’s ruled that he didn’t cause it to move. Now you tell him he may have? Now? This a joke?”

Even Tiger Woods, that known revolutionary, took Johnson’s side, congratulating him for a strong finish “overcoming that farce.”

The tweets went on and veered into the humorous, including one that said, “Make the USGA great again.” That one is laugh-out-loud funny but for the wrong reasons and you can go back to the greatest game-changing moment in golf history to find the organization asleep at the wheel when it allowed metal woods. The distance revolution in the 1990s and early 2000s also caught the USGA with its technology pants down and while it has finally settled on some equipment limits, it hasn’t made any significant difference regarding the modern golf ball.

Golf has long had an unofficial global rules forum. Ever since Paul Azinger kicked some rocks aside while taking a stance in a hazard at Doral, armchair rules officials have been calling in from home to report violations they witnessed on TV.

The concept of protecting the field and making sure every violation is identified is a noble one.

But Sunday you saw the flaw in the ointment — pardon the twist on an old cliché.

A modern golf championship — or television show, as we call them now — can’t continue in an orderly fashion if no one knows what the leader’s score actually is.

Let’s say Johnson has a two-shot lead at the 18th green, he’s in the final twosome, and he’s got a 12-foot birdie putt. Whether he has to make it or needs to lag it close and get down in two to win hinges entirely on knowing where he stands. Or maybe the challenger takes on a risky shot to make up ground when, in fact, he was tied for the lead and would’ve have played conservatively instead.

Somebody, somewhere, has to make an immediate decision on a rules question: an informed decision delivered quickly. None of this after-the-round stuff. That is supposed to be why a rules official walks with each group, to do just that. He was overruled in this case.

McIlroy had it right. And by the way, give him credit for supporting Johnson because he surely was rooting for Ireland’s Shane Lowry, a good pal, to snag the title. “I wouldn’t hit another shot” until the matter was resolved, McIlroy said.

A rules committee should’ve huddled in front of the TV, looked at all the angles in super slow-motion and decided whether that was enough evidence to overturn the official’s original ruling that there was no infraction. Either way, play resumes in a couple of minutes, the doubt is removed and the focus returns to the golf.

So you get one wrong once in a while? Live with it.

Baseball was easier before instant replay. Don Denkinger famously missed a call at first base that affected a World Series outcome. Umpires are people, people are human, they make mistakes. For years, that was just part of the game. In golf, we call bad breaks the rub of the green.

We could hold another entirely different debate about whether Johnson deserved a penalty because his ball moved fractionally. He took two practice strokes with his putter head next to the ball, slid the club behind the club — but did not appear to ground the club — and the ball inched a hair backward. How would he have made that ball move?

Johnson’s fellow PGA Tour players agreed, as far as I could tell on Twitter, that he was in no way responsible.

“Watching the video, I still don’t think I caused the ball to move but the USGA, they said I did,” Johnson said after the round. “I don’t even understand the rule but I got a penalty. It didn’t matter at the end of the day.”

It could have mattered. The rules about the ball moving have been modified after a 2014 incident in which Justin Rose’s ball moved and he did not cause it. That got rulesmakers thinking about crawling into the 21st century.

And let’s not forget to consider the real cause of balls moving at this Open: Oakmont’s greens. Lowry, the 54-hole leader, drew a penalty in the second round because his ball moved slightly as he was getting ready to putt. Frenchman Romain Wattel also had a ball-moving incident. The USGA and Oakmont worked hard to get the course’s greens up to the fast speeds the USGA prefers, thus creating better conditions for balls to move due to gravity.

In other words, this situation at Oakmont was the USGA’s own doing. Make the greens super-slick and balls are more apt to move. Mix in some steady winds — see last year’s British Open at St. Andrews — and you’ve got a recipe for disaster.

L’Affaire DJ can never happen again. You dodged a bullet this time, USGA, thanks to Mr. Johnson’s superlative play. His finish at Oakmont will live on long after your bumbling indecision and intrusion.

You shouldn’t need a memo, USGA, to know you have to come up with a plan to solve tournament rules questions in a timely manner. The current scores are essential to the competition.

Journalist Rick Arnett tweeted this quip that Dallas Cowboy fans would enjoy: “USGA just informed Dez Bryant that he indeed made the catch.”

There was no catch at Oakmont. Tiger was right. The USGA fumbled.