The U.S. Girls’ Junior final wasn’t close, but it was still deeply meaningful 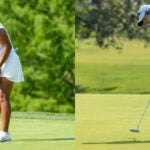 Bailey Davis, an 18-year-old public-course amateur golfer from small-town Maryland, had herself a big time at the USGA Girls’ Junior Championship, which concluded on Saturday at the tony Columbia Country Club in Chevy Chase, Md., seven miles from the White House.

She didn’t win the thing. In fact, she got trounced in the storm-interrupted 36-hole final (6 and 4) by another 18-year-old, Rose Zhang, the reigning U.S. Amateur winner, who is bound for Stanford. The course was spectacular but the heat was vast. Going outside was like stepping into a Turkish steam bath. And still Bailey Davis had the time of her young life.

“When your week begins by getting a letter from Barack Obama, that’s a great start,” Bailey said Saturday night in a phone interview. That is, Columbia C.C. member Barack Obama. All the girls received a letter from the former president, addressed to each player individually.

For Bailey, who has played in many tournaments where she was the only Black contestant in the field and who was vying to become the first African-American female to win a USGA title, the letter was especially meaningful. After all, Obama was not just the first Black president, he is also a golf nut. Obama and his wife, Michelle, are both heroes to Bailey. Bailey said that their example inspired millions. In her own way, she hopes to do the same.

“It’s a challenge, and it’s nice, to be able to step up to the plate and represent my race, to show Black girls everywhere that this is something we can do,” Bailey said.

Can she ever. The recent graduate of North Point High School in Waldorf, Md., took up golf at the urging of her maternal grandfather, who lives practically on the municipal golf course in Allentown, Pa. She hit her first shots there as a six-year-old. Bailey’s father, retired from the Navy after a 30-year career, is an active volleyball coach. Bailey played softball, volleyball and golf until golf, over time, won out.

She has a beautiful, powerful and athletic swing. She steps in and hits it. That is, she’s fast. Next month, Bailey will take her talents to Tennessee. She’ll be a Lady Vol. It’s hot there, too. In the sweatbox of Chevy Chase, Bailey looked like she was on Centre Court at Wimbledon, playing with a yellow ball and wearing all-whites, with a shirt stamped with a large T.

It’s nice to be able to step up to the plate and show Black girls everywhere that this is something we can do.

As for Rose Zhang, she’s already a known talent in the game. Watching her and talking to her, it’s hard to believe she’s 18. Her parents and her older brother were both born in rural mainland China, and the family moved to Southern California before Rose was born. “My father was a lawyer in China, but here he is devoted fulltime to my golf,” Rose said in a phone interview Saturday night.

On public courses all through Southern California, you will find immigrant parents from China, Korea, Thailand, Vietnam, among many other countries, who have made their children’s golf the driving force of their own lives. But few of those golfers are as successful as Rose, who was the medalist in the 36-hole qualifier at the Girls’ Junior, with rounds of 69 and 62. This from the young golfer — did we mention she’s a straight-A student? — who made the cut in the 2019 U.S. Open. Next month, at the Westchester Country Club, just north of New York City, she will try to defend her U.S. Amateur title.

Saturday was an interesting day to watch golf, if you were playing Last Channel Ping-Pong between the British Open on NBC and the Girls’ Junior on Golf Channel. For some, it was hard not to think about Ann Gregory, the first Black woman to play in USGA events, which she did in 1956. Mrs. Gregory’s life went from rural Mississippi to a Black public course in Gary, Ind., to a spot in the 1956 U.S. Amateur. Scores of American newspapers noted her achievement. She was the Jackie Robinson of women’s amateur golf in the U.S. in the 1950s. That game was as white as the driven snow.

Slow-forward to 2021. For most of the past 60 years or so, it would have been positively mind-blowing to even think of a Black public-course golfer and the daughter of Chinese immigrants meeting in the final of the U.S. Girls’ Junior Am, playing at a chintz-sofa club like Columbia C.C. But not anymore. Progress, of a painfully slow kind.

In 2005, the baseball Hall of Famer Frank Robinson had moved to Washington, D.C., to become the manager of the Washington Nationals. Robinson loved golf but he was sure that he would never be able to play at Congressional Country Club, the famous U.S. Open venue on the outskirts of Washington. At that point, Congressional was open to Black members, but Robinson didn’t believe it. When he was coming up in baseball in the 1950s, there were still plenty of spring-training hotels that would not accommodate Black ballplayers.

In 1959, when the U.S. Women’s Amateur was held at Congressional, Ann Gregory, as a Black player, was not permitted to attend the contestants’ dinner. In 1956, when she played in the Amateur at Meridian Hills Country Club, in Indianapolis, another player mistook her for a housekeeper and asked Mrs. Gregory where she could find some hangers for her clothes. Today, Bailey Davis’s swing coach, John Scott Rattan, works at Congressional. Bailey is there often and always feels welcome.

Gregory had one child, a daughter, JoAnne Gregory Overstreet, who is a retired teacher who lives in Las Vegas. Mrs. Overstreet was delighted to hear about the final match of the USGA Girls’ Junior, Ms. Zhang v. Ms. Davis.

“When that other contestant asked for those hangers, my mom just helped her get them, that was just easier for her, and her attitude always was, ‘Racism is the other person’s problem,’” Mrs. Overstreet said in a phone interview on Saturday. “She’d have been thrilled to see that final match with those two golfers.”

She was asked how her mother would handle the hanger incident today.

“Oh,” Mrs. Overstreet said. “She’d say, ‘Well I happen to be a contestant in the tournament, too, but I’d be happy to help you find some hangers, and I hope we get a chance to play each other in the tournament, and may the best golfer win.’”

On Saturday, at Columbia Country Club, the best golfer won. Rose Zhang, a mega-talent, won. You could say golf won, too. As for Bailey Davis, she was looking forward to driving home with mom and dad, getting some sleep and seeing where her life in golf goes next.