U.S. Amateur: Here’s who will be playing in the championship match 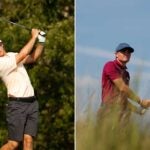 James Piot and Austin Greaser will meet in the U.S. Amateur championship match.

After six days of grueling competition, the 121st U.S. Amateur has its championship match. James Piot and Austin Greaser will face off on Sunday afternoon in the 36-hole championship match at Oakmont Country Club.

Piot punched his ticket to the final after toppling reigning freshman of the year James Gabrelcik 4 and 3 in their semifinal match on Saturday afternoon. The rising Michigan State senior lost the first hole of the match, but after winning with a par on No. 2, Piot never trailed again.

The match was back and forth for much of the front nine, but once the competitors crossed the bridge over the Pennsylvania Turnpine back toward the clubhouse, Piot took control. The 24-year-old won holes 9 through 11 to go 3-up, before eventually closing out Gabrelcik with a par on the 15th hole.

Similar to the match between Piot and Gabrelcik, the front nine of the second semifinal was another back-and-forth affair. Greaser and Travis Vick tied just three holes on the front nine at Oakmont as they made the turn all-square, but on the back nine, Greaser took control for good.

With their spots in the championship match secured, both Greaser and Piot have earned spots in the 2022 U.S. Open, Masters and Open Championship. But come Sunday afternoon, their minds will be on one thing: taking home the Havemeyer Trophy.

“Yeah, that’s cool, and I think that’ll be a good thing to, I guess, look forward to after tomorrow,” Greaser said of the perks of winning. “But I just want to stay in the present the best I can. I want to focus on tomorrow, try to get, you know, maybe a couple hours tonight if I can sleep at all and get some good food and be ready to go at No. 1.

The championship match will tee off at 9 a.m. on Sunday, with the second 18 scheduled to begin later in the afternoon.