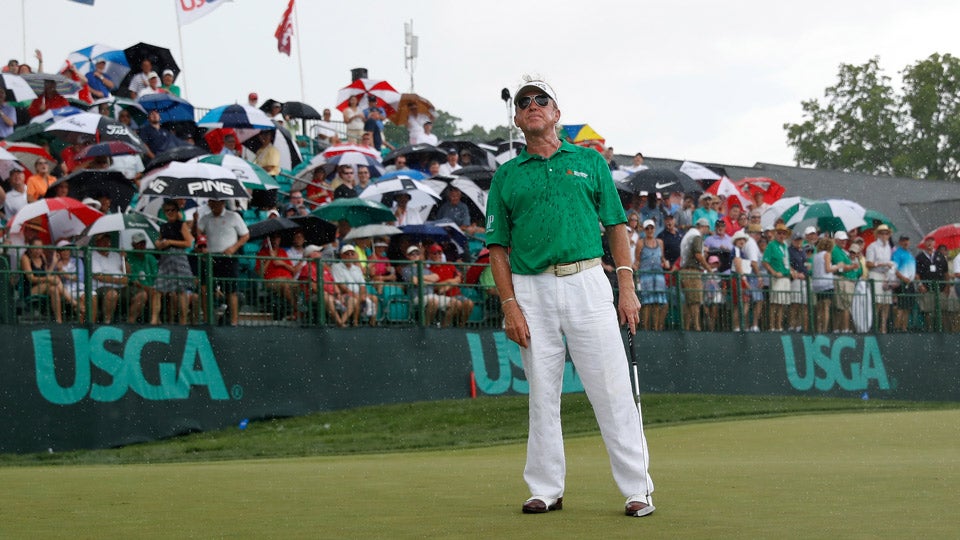 Miguel Angel Jimenez during the third round of the 2016 U.S. Senior Open.
Getty Images

Saturday’s gusting winds and Scioto’s firm greens pushed the course from pretty challenging to potential train wreck. The United States Open, even the senior edition, is supposed to be the game’s most difficult test, so when the flagsticks started bending and the leaves began shaking when gusting winds arrived midway through the round, that’s why there was a faint touch of glee in the headset voice (who shall remain unidentified) as the Fox Sports telecast went to a commercial: “Carnage! We have carnage!”

It wasn’t a fight to the finish Saturday, it was a fight to finish. Only Miguel Angel Jimenez (-3) and Gene Sauers (-2) are still under par. Loren Roberts, Ian Woosnam and Billy Mayfair share third place at one over. Twenty-five players posted scores of 75 or higher. The 18th hole yielded only one birdie.

Jimenez, the pony-tailed Spaniard (hey, that thing doesn’t work as a stabilizer in the wind, does it?), might be the best player on the Champions tour, if he played it full time. Here are his finishes in seven previous senior tournaments, best to worst: 1st, 2nd, 2nd, 2nd, 3rd, 4th, 11th.

Sauers appeared to be reeling after dropping from five under through three holes to even through 14. But he holed a birdie at 16, a long putt from off the green at 17 (one of only two birdies on Scioto’s signature hole) and a clutch par in the rain on the manly 18th. Sauers and Mayfair, playing in the final group with second-round leader Joey Sindelar, were caught in a sudden downpour while they were playing 18, proving correct the USGA’s decision to send the field off both tees at 7:45 a.m. to beat forecasted storms.

“I told my caddie at 17, It looks like we’re gonna beat the rain,” Sauers joked. “I guess I should’ve kept my mouth shut.”

Scioto had just about everyone reeling Saturday. Second-round leader Joey Sindelar struggled to a 77, but the third round was so difficult, he fell back only to a tie for sixth. Mayfair had six bogeys in a 75; Michael Allen suffered four bogeys and a double in his 73 and Glen Day, who shot 74, played the last 12 holes in five over.

“The wind, obviously, threw a monkey wrench in everybody’s plans today,” said 66-year-old Hall of Famer Tom Watson, who fell out of contention after posting 82.

There are 16 players within six shots of the lead but their chances hinge on the play of the 52-year-old Jimenez. He can put a lot of them out of their misery with a good round.

The guy can still contend on the European tour; he was 18th in the British Open at Royal Troon. He is relentless and just the right mix of fearless and unworried. He isn’t invincible — he led the British Senior Open in Scotland after three rounds, shot 75 and placed third — and isn’t bothered by that in the least. “I lost that tournament in Scotland,” he said after his superb third-round 69 here. “Tomorrow, we have to play all 18 holes. Whatever happens, happens. I want to win my first major, of course. But the main thing is to focus on the game and enjoy myself.”

Jimenez made a sweeping gesture to indicate his country-club surroundings. “Look at my office,” he said. “This is a great life. When I finish here, I will have a big, fat cigar, a glass of wine and dinner with my wife.”

Sauers takes Jimenez’s theme to heart, too. He’s 53 and before joining the Champions tour battled Stevens-Johnson Syndrome, a rare skin ailment caused by clogged blood vessels that made his skin burn from the inside-out and required multiple skin grafts. So, yes, Sauers will enjoy Sunday’s finale even more than Jimenez, if that’s possible.

“Five years ago, I was laying in a hospital bed and now, here I am playing with some of the best players in the world in the last group on Sunday,” said Sauers, a Georgia native who won four times on the PGA Tour but never on the senior circuit. “They told me I had a 25 percent survival rate. I didn’t ever think I’d be playing golf again. So, it’s a thrill and honor to be here. When I got out of that hospital after three months and started practicing, I said, ‘You know, a bogey isn’t going to matter much anymore.’ I guess I’ve got a strong mental side, just to pull out of what I went through.”

David Frost is another player to watch after shooting 68 in the wind to trail by five. A classic fairways-and-greens-guy, Frost is playing well after finishing sixth in Minnesota last week. He never won a major on the regular tour, a minor surprise, but if he had, it would’ve been an Open because he game is suited for it. He still enjoys senior golf, along with his successful wine business. The South African resides in West Palm Beach and uses Donald Trump’s local golf facility to practice and play because, of course, he is a friend of Trump and a frequent winter golf partner.

What’s it like to hang with a Presidential candidate? “I said to him the other day, where did you learn to talk like this?” Frost said. “I’ve known him the last four, five years and we just kind of socialize, and all he’s really done big on TV was The Apprentice. Now, you know, he has a wealth of information that he talks about. He’s very friendly and very accommodating to all his members.”

And then there is Bernhard Langer, top dog on the senior tour and winner of two majors this year. He needs one more to tie Jack Nicklaus for the most senior major titles, with eight. Another win would also move Langer into a tie for second with Lee Trevino for most career senior victories, 29, but still well behind Hale Irwin’s 45.

Langer is 58 and showing no signs of slowing down.