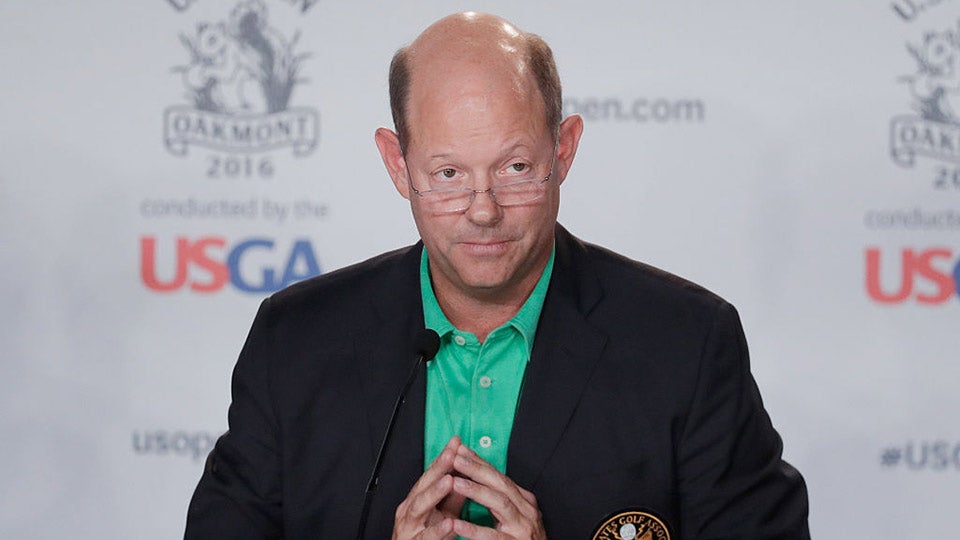 Mike Davis has tried to repair the damage done by the USGA's unpopular call on Sunday at the U.S. Open.
2016 Getty Images

Those are my words, not theirs.

USGA chief Mike Davis said the organization needed “a mulligan” for delaying a decision on whether tournament leader Dustin Johnson would incur a penalty for an incident at the 5th green.

It quickly became obvious that it was a terrible idea to wait until after the round to decide whether there would be a penalty for the man leading the tournament for most of the back nine.

Golf is played in real time and every contender’s strategy, including Johnson’s, may be influenced by the leader’s score. Play should have stopped, like in other sports that use replay, until Johnson’s possible penalty and score were finalized.

It also was obvious that the USGA had made up its mind to penalize Johnson no matter what he said.

The USGA crew got it right by admitting they got it wrong — yay! But they still got the most important thing wrong. Johnson should not have been penalized.

According to an amendment announced in January to Rule 18-2b (Ball Moving after Address), a one-stroke penalty should be applied only when the facts show that the player has caused the ball to move.

In Johnson’s case, there was nothing in the slow-motion replay of his actions to factually prove that he caused the ball to move. Fox Sports and Golf Channel had USGA rules gurus Jeff Hall and Thomas Pagel on the air to explain the ruling. While the USGA guys said they were “confident they got it right,” they had nothing to hang it on. Golf Channel’s Brandel Chamblee clearly felt strongly that the USGA duo had erred. When Chamblee pressed them, all he got from Hall and Pagel was doubletalk. The two hid behind the phrase, “It’s more likely than not” that Johnson caused the ball to move.

Johnson made a couple of practice strokes to the side of the ball. This would not cause the ball to move backward. As he moved his putter behind the ball, the ball then edged slightly backward. Johnson had not yet addressed the ball and, as many times as I watched the slow-motion replay, his putter head did not touch the ground. It remained in the air and, therefore, could not have caused the ball to move.

Hall and Pagel indicated that the ball moved shortly after Johnson soled his putter next to the ball — not behind it! — a second time. How does touching the ground next to a ball cause it to move backward, not sideways, a second or two later?

There are bigger issues here. Integrity is the first. Golf is a game of integrity, supposedly. Johnson called over a rules official and told him he didn’t cause the ball to move. Lee Westwood, a competitor who was paired with Johnson, agreed. The rules official walking with the group acknowledged their comments, apparently signed off on their conclusion, and play proceeded. If Johnson said he had moved the ball, he would’ve had to replace it to the spot before it moved and take a one-shot penalty. Johnson was sure he did not cause the ball to move. In golf, that’s the end of it. But a couple of guys in a TV booth decided he should be penalized.

Hall and Pagel called Johnson a liar. They didn’t use those words but by assessing a one-shot penalty, they branded him a liar. And Westwood. And the walking rules official.

I don’t believe any of those three are liars. And I don’t see what evidence there was to levy the penalty. Pagel said that if it there was even a 51 percent chance that Johnson might have caused the movement, then a penalty must be assessed.

Fifty-one percent? There is no such thing. That’s like being 51 percent pregnant. You either are or you aren’t.

Johnson said he didn’t make the ball move. The USGA officials and their ambiguous wording (“more likely than not”) was a crock. Johnson’s word is good enough. If he said he didn’t cause his ball to move, then he didn’t cause it to move. That’s how golf is played. That is the game’s tradition. Davis knows better. It would have been embarrassing to overrule Hall and Pagel, especially since the one-shot penalty didn’t change the outcome, but that’s what Davis should have done.

The second, bigger issue is, Why is this even a penalty? No advantage is gained. No player is trying to improve his lie on the green for his next putt. The rules were rewritten on this recently to protect the players in this ball-moving situation (after Padraig Harrington had an awkward after-the-fact decision) but they weren’t rewritten well enough.

If a ball on a green moves even slightly before a player’s stroke, why not allow him to adjust the ball to its previous position without penalty? The player wasn’t trying to make a stroke. It’s like accidentally nudging a ball off the tee with a driver at address. There was not intent, so that’s not a penalty. You re-tee and play on. The rule should be consistent on the putting green, too.

The real issue at Oakmont was that the greens are severely sloped and insanely quick. During Sunday’s telecast, we kept hearing how the greens had been rolled and triple-cut to improve the speeds. You combine fast greens with severe slopes and guess what?

Balls are going to move on their own.

There were at least three instances of balls moving on the green. Shane Lowry, the 54-hole leader, took a penalty during his second-round 68, because the ball moved while he was addressing a putt. France’s Romain Wattel also had a ball-moving incident on the green in the final round. He had addressed the putt and was in position for an estimated six seconds before the ball moved. He was not penalized.

When was the last time you heard of three ball-movement issues on the greens in a major championship on a calm day? Something else was at work here.

The balls moved because the USGA set up the greens too fast for Oakmont’s severe undulations and severe pin placements. It’s the USGA that is ultimately to blame here. Its setup caused these problems. Funny how even though the Masters has similarly super-fast putting surfaces that are severely sloped, we don’t hear about problems with balls moving on the greens.

Two of the top Open contenders (Johnson and Lowry) suffered one-stroke penalties because their balls moved even though the players didn’t cause those movements. Really, is this how you want your champion decided?

The apology was nice, USGA, but it wasn’t enough. The eyeball test and the weight of the evidence says you still got it wrong, wrong, wrong… more likely than not.