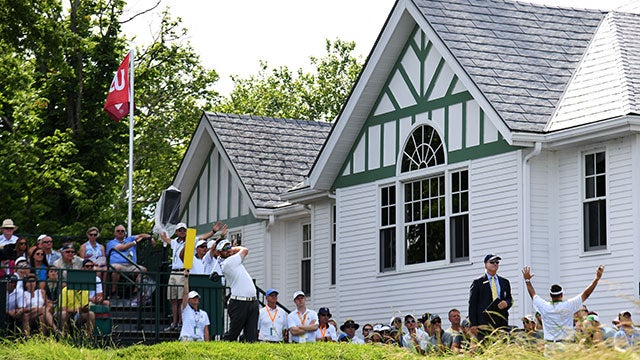 Louis Oosthuizen of South Africa hits his tee shot on the first hole during the third round of the U.S. Open at Oakmont Country Club on June 18, 2016 in Oakmont, Pennsylvania.
Getty Images

OAKMONT, Pa. – Louis Oosthuizen slipped down the clubhouse stairs, spoke to his agent, and exited quietly as darkness fell over Oakmont on Saturday night.

In other words, he was right where he so often seems to be: lurking.

“You get to within seven and you have a good one tomorrow, like a four under, you give yourself a shot,” said Oosthuizen, who surged into contention with a second-round 65 that included eight birdies before falling back some, going three over through 15 holes of his third round.

At three over for the tournament, he’s eight behind the leader Shane Lowry, who still had four holes remaining in his third round. That seems like a big gap, but it’s not that big; Paul Lawrie came from 10 behind to win the 1999 British Open.

Oosthuizen is something of an authority on comebacks. At the U.S. Open at Chambers Bay last year he opened with a 77, then stormed back with rounds of 66-66-67, reeling off six birdies in the last seven holes of his final round. He tied for second with Dustin Johnson, one behind winner Jordan Spieth. “You’ve gotta have a good start,” said Oosthuizen, the 2010 British Open champion who has since authored three runner-up finishes in majors. “Just to let the guys see that you’re putting a good round together. And you can’t make mistakes. I made way too many mistakes on the front nine today.”

After his torrid second-round 65, the low round of the tournament thus far, Oosthuizen seemed to run out of gas in the third round as he played the front nine in four over. He got a shot back with a birdie at the par-4 10th hole before stringing together five straight pars to finish three over par total.

“I’ve got a little one and a half footer left for par on 16,” he said, “so if I can squeeze out one more birdie on the last two and be six or seven back, and then start well, you never know. The course is still receptive, but it’s speeding up. I’m curious to see it tomorrow.

“I definitely think it’s possible,” Oosthuizen added, speaking of a big comeback. “It all depends what the guys do. Shane is five under with four holes left and you reckon he’s going to stay there. I think if I get it to two over, seven back, I’d need something really special to have a chance. I mean you never know. It’s the U.S. Open.”