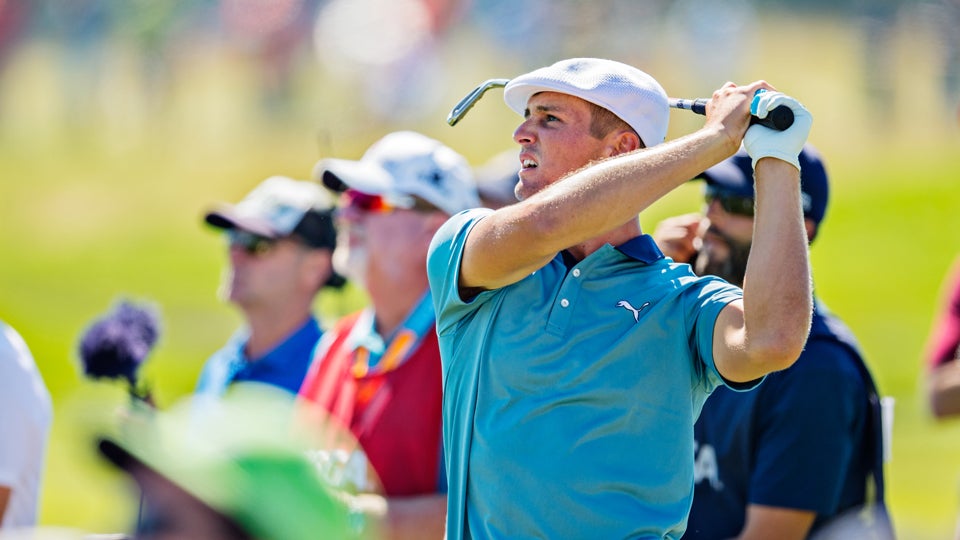 OAKMONT, Pa. — If you possess patience in our Twitter-crazed, Snapchat-mad world, you ought to put it in on your resume. It’s that hard to come by these days, especially in golf.

And yet it’s patience, it seems, that will define Bryson DeChambeau’s 2016. And patience that might have saved his day in the third round of the 116th U.S. Open.

After plodding along to one over par through 36 holes, DeChambeau was his normal self at Oakmont Saturday: confident as ever against the toughest course he’ll play this year.

“Every tournament, I feel like I can possibly win,” the 22-year-old said. “I don’t think there’s a golf course that doesn’t suit my game. I like hitting the ball as straight as I can. I’m known for my ball-striking. The putter gets hot, watch out.”

In less than an hour, he found the putter wasn’t hot, and the ball-striking wasn’t, either. DeChambeau bogeyed the first three holes of his third round, finding trouble both off the tee and around the green. The tournament he felt he could “possibly win” was slipping away from him.

DeChambeau birdied the par 5 4th, but three-putted for bogey at the 5th.

“Another bogey,” he said to his caddie. Ball in hand, he punched the air. DeChambeau was irked, and felt shorted for landing the ball pin-high and spinning it back some 40 feet. Not long later, a fan brushed up against the ropes and yelled in his face, “C’mon Bryson! I put $20 on you. Twenty dollars to win $2,500.”

“I honestly don’t know why people think they need to do that,” DeChambeau muttered under his breath. It looked like he might crack. It would have been easy to.

But DeChambeau made birdies on the 9th and 10th, and his name began reappearing on the old-school manual scoreboards around Oakmont. A double-bogey 7 on the 12th hole would test him again, but the uber-confident ball-striker bore down again. DeChambeau birdied three of the last six holes en route to what had to be a maddening, seven-birdie 70.

DeChambeau exhibited the kind of patience Oakmont demands; the kind of patience that breeds bounce-back birdies and cuts-made at the highest level of professional golf. If he doesn’t contend Sunday, and especially if he tumbles down the leaderboard, DeChambeau will ironically need to exert similar patience moving forward. What gets lost in golf fans’ and the golf media’s collective fascination with and expectation of the newly anointed NBT (Next Big Thing) is that he hasn’t made it yet.

DeChambeau is not a PGA Tour member. His stats don’t rank on PGATour.com and he doesn’t know which events he’ll play late in the season, and definitely not next year. DeChambeau is playing for the U.S. Open trophy this week, but he’s also playing for his Tour card. Even before that, he’s playing for a specific number of “hypothetical” FedEx Cup points (361), which he has not yet earned, but which could earn him special temporary status on the PGA Tour, and with that, the reward of playing in an unlimited number of tournaments this season.

DeChambeau has made just two cuts since turning pro. His fame exceeds his successes, which is both ironic and cause for — you guessed it — more patience. Fans roared Saturday when he was announced alongside Brendan Steele and Harris English. His veteran playing partners earned modest claps and a few “Go Dawgs.”

Things might not work out for DeChambeau at Oakmont on Sunday. Odds are they won’t. But he’s young, supremely talented and teeming with self-belief. He might just need some more time.