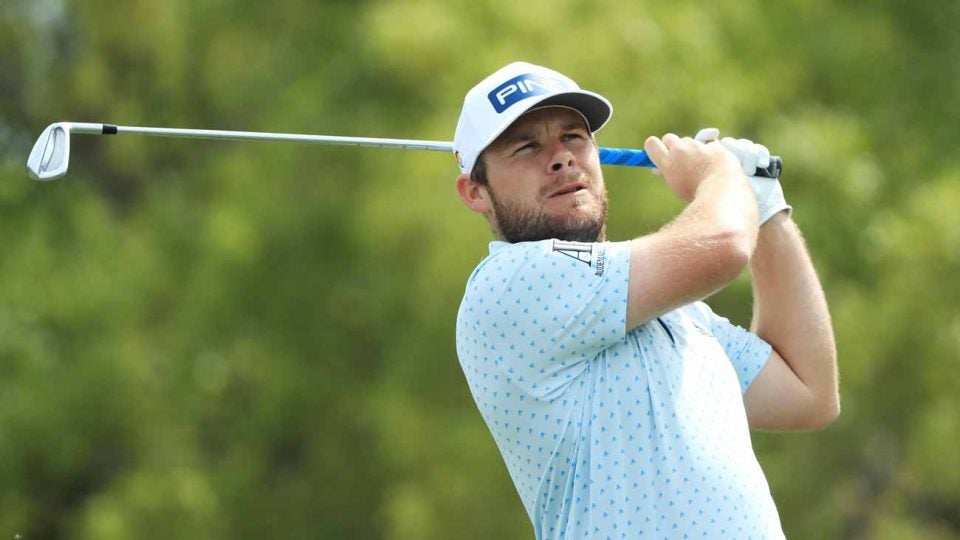 Tyrrell Hatton hits a shot during the final round of the Arnold Palmer Invitational.
Getty Images

Tyrrell Hatton lifted his putter to his shoulder, fashioned it into a makeshift shotgun and shot the lake that a few minutes earlier had swallowed up his drive. He added a middle finger.

Nevermind that he still had to make a 6-foot double-bogey putt.

Hatton eventually used his club for its intended purpose to make his 6, his two-shot lead on Sunday at the Arnold Palmer Invitational was now none, and he gave his blue bully a few more explicit gestures before walking to 12.

How do you slay a Bay Hill golf course that was giving the middle finger to the world’s best golfers?

You give it right back, and that steadfast defiance, on a day where it seemed everyone played a game of ‘everything you can double-bogey, I can double-bogey better,’ is the reason Hatton claimed his first PGA Tour victory, shooting a 2-over 74 to hold off Marc Leishman by a shot.

“Yeah, it’s an incredible feeling to win at such an iconic venue and with obviously Arnie’s name to it,” Hatton said. “Yeah, amazing feeling, and it’s very surreal to win this week.”

Here’s everything you missed from Sunday’s action in Orlando, Fla.

Maybe the shotgun forced Bay Hill to lower its arms against Hatton.

Minutes after Hatton’s double bogey at 11, Sungjae Im, the player who had pulled even with Hatton and the winner last week at the Honda Classic, made a double-bogey of his own on 13, giving Hatton his two-stroke advantage right back.

From there, Hatton shot even par to the clubhouse.

Leishman, the 2017 champion and this week’s tournament ambassador, birdied 16 to trail by one. Hatton then followed with the two shots that won him the tournament. On the par-3 17th, he knocked the 218-yard tee shot over the water to within about 20 feet, and he and Leishman made their pars. On the par-4 18th, after a drive in the fairway, Hatton knocked a 170-yard shot over more water, and he and Leishman traded pars again.

“Just trying to hold up a 5-iron on 17, and then 18, we were, it felt like we were in between a really soft 6, which isn’t a nice shot to try and hit it, or just try and get a good flight on a 7,” Hatton said. “And as I stepped into the ball, I think the wind did me a favor, because it felt like it pretty much dropped on me, which gave me the confidence to just stand there, and I feel like that was probably one of the best swings I made all day.”

McIlroy shared the lead, lost it, then really lost it

Top-ranked Rory McIlroy held a share of the lead for one hole. His birdie on the 4th and Hatton’s bogey on the 3rd pulled them even, but McIlroy gave the lead right back with a bogey on the 5th.

The bogey then started a five-hole stretch where he played bogey golf, as he double-bogeyed the 6th and 9th. McIlroy did finish 5th, continuing a streak where he has not finished worse than tied for 5th this PGA Tour season, but he did wonder what could have been.

“I stood up here yesterday saying that the key tomorrow was to keep the big numbers off your card, and I made two of those today and that’s what cost me,” McIlroy said.

A day after Bay Hill surrendered no rounds under 70, it was a bit more generous on Sunday — one player broke the number, with Matthew Fitzpatrick shooting a 3-under 69.

Bryson DeChambeau, Keith Mitchell and Joel Dahmen rode 1-under 71s to climb the leaderboard, with DeChambeau finishing 4th and Mitchell and Dahmen ending up tied for 5th with McIlroy and Danny Lee. Im fired a 1-over 73 to finish third.

What happened with Brooks Koepka?

Koepka shot his best round of the week with a 1-under 71. But for a four-time major champion and former top-ranked player, it was, well …

Tiger Woods’ pursuit of the PGA Tour’s all-time wins record will have to wait at least two more weeks, as he is taking off this week and next week’s Players Championship.

One of the biggest events of the season, The Players Championship, begins Thursday in Ponte Vedra Beach, Fla.