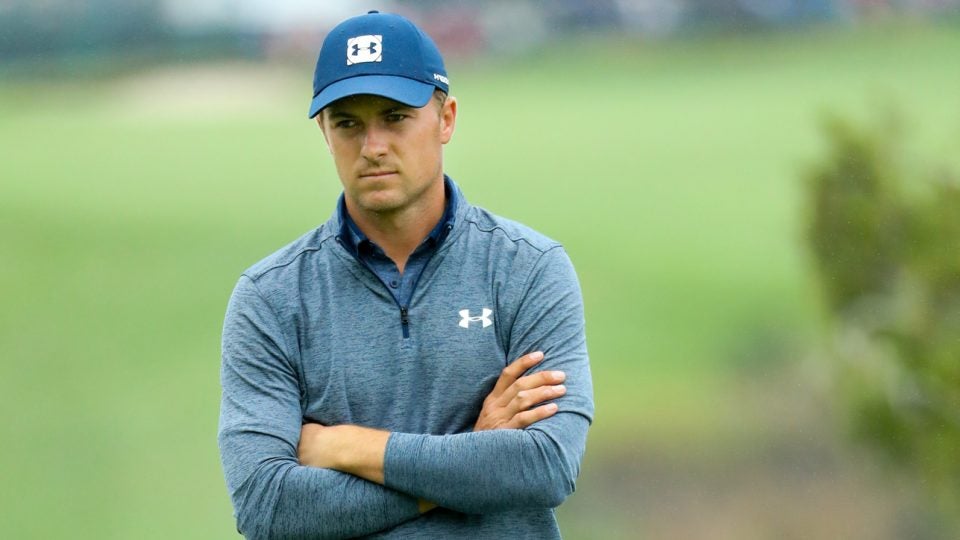 Jordan Spieth had another interesting day at the U.S. Open on Friday.
Getty Images

After his bunker-rake incident during Friday’s second round of the 2019 U.S. Open at Pebble Beach, Jordan Spieth took full responsibility for what unfolded in the fairway bunker on the second hole.

“The ball was above my feet in almost a little downslope, and I was trying to hit a 6-iron 200 yards,” Spieth explained after his round. “So in the first place it was a really, really tough shot. But I had a clean lie. Thought I could clear the lip. And when I hit it, all I heard was like the rake. And I guess it slammed into the rake and came back and kind of buried down into the tall grass.”

“So if it didn’t hit the rake, I don’t know if it had enough to get anywhere near the green or if it would have been way short or what, but certainly it would have been in a better position than it went to. And that’s on me,” Spieth continued. “I just got to look at all options ahead of me. And if there’s rakes in front of the bunker, typically we pull them out. But when I was in it, I couldn’t see it. So it was kind of a weird set of events. Honestly, the only upsetting part was where the ball went after that, because it’s on me to hit the rake. Sometimes it’d hit the rake and pop up and be on the fairway, right? But it ended up in a pretty bad spot.”

Tournaments
U.S. Open 2019: Jordan Spieth explains why he looked like ‘the bad guy’ for ripping caddie

Spieth’s tee shot at the second hole on Friday caught the lip of the bunker and set up a second shot from the sand. Here’s how the rake incident unfolded:

These hot Fox mics are doing Spieth ZERO favors this week. Comes across like the petulant child he can be. Hitting awful shots and blaming his caddy. “Yes there is a rake there” – Greller- as we watch their relationship devolve to no fault of Michael’s pic.twitter.com/LmZioVtRoa

Tournaments
Tour Confidential Daily: Was Jordan Spieth wrong in how he treated his caddie?

It appears at first that Spieth just simply hit the lip of the bunker. However, replays showed that there was a rake planted within the long grass of the bunker. After Spieth’s ball hit the rake, the ball landed in the rough.

“Yes, there is a rake there,” Spieth said to his caddie, Michael Greller, after the shot.

Spieth, who went on to save bogey at the par-4 second hole, finished the day at two-under 69. The rollercoaster round consisted of seven birdies and five bogeys for the 2015 U.S. Open champion. After 36 holes, he sits tied for 27th at one-under and six shots off the lead.

The three-time major champion is looking for his first major victory since the 2017 Open Championship.