Fireworks are expected any time an event is held at iconic Pebble Beach Golf Links. The 2018 U.S. Amateur has been no different.

By the end of the stroke-play competition, 24 players were left tied for the final of 64 spots in the match play portion of the event. On Wednesday, all 24 players faced off in a sudden-death playoff for the right to advance. Incredibly, the playoff only lasted two holes.

The battle royale began at 7:30 a.m. PT on Pebble’s par-3 17th hole. By the time the playoff moved to the 18th hole, only two competitors were left. Jacob Bergeron and Peter Kuest made birdies at 17 to survive and move on. 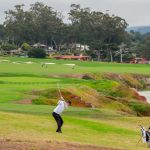 You may also like Epic 24-for-1 playoff set for Wednesday morning at U.S. Amateur at Pebble Beach

At 18, the pressure seemed to get to both players. After decent drives, Kuest went for the green in two but watched as his ball bounced into the Pacific Ocean. Bergeron had come up short and right with his second, and a tree stood between him and the green. With Kuest struggling, Bergeron chose to chip out towards the front of the green with his third.

After a penalty drop, Kuest’s fourth shot came up just short of the green. His chip settled four feet away, but he missed that putt for 6, and then missed the comebacker to finish with an 8. Bergeron chipped on and two-putted for a bogey-6 to put an end to the playoff. Afterward, Bergeron appropriately noted, “This is definitely the craziest playoff I’ve ever been a part of.”

Bergeron now advances to the match play, where he will face of against No. 1 seed Daniel Hillier of New Zealand. The first round of the match play is underway, and you can follow it all day here.

Watch the wild playoff for yourself below.