Tour Confidential: Is JT the prohibitive favorite to repeat at the PGA?

Check in every Sunday night for the unfiltered opinions of our writers and editors as they discuss the hottest topics in the sport, and join the conversation by tweeting us @golf_com. Tonight we discuss Justin Thomas’s win, PGA favorites and more.

1. Justin Thomas will head to the PGA Championship as not only the defending champ, but coming off his first World Golf Championships win. He shot 69 on Sunday to lock down a four-shot victory at Firestone. Is he the prohibitive favorite next week?

Dylan Dethier, associate editor (@dylan_dethier): Nah, that honor still belongs to Dustin Johnson. DJ has two wins and two third-place finishes in his last five starts, the only aberration coming with an MC at the British Open. Nice win by JT, though!

Alan Shipnuck, senior writer (@alanshipnuck): Not only is JT coming in scorching hot he’s been stellar all season long backing up last year’s breakthrough. I’ll take him over DJ.

Jeff Ritter, digital development editor (@Jeff_Ritter): Both are great picks, so I’d split the difference and say the favorite is Dustin Thomas. Both guys look unstoppable when locked in. Either could win at Bellerive by five shots or more and it wouldn’t be the least bit surprising.

Michael Bamberger, senior writer: Does prohibitive mean you cannot make a case for somebody else? I’ll make a case against JT and his sunshine band: it is extremely difficult to do it for eight consecutive rounds. Four is hard, five is harder — then there’s six and seven. Eight is way, way hard.

2. Rory McIlroy was in the final pairing at Firestone, trailing Thomas by three after 54 holes, but he couldn’t get anything going and shot 73 to tie for 6th. McIlroy is still majorless since 2014. After this latest Sunday swoon, where is your McIlroy Meter with just one major left on the ’18 calendar?

Dethier: You can set my Mc-o-Meter to “bummed out.” Rory keeps teasing us with glimpses of winning form only to snatch them away; remember his Sunday surge at Carnoustie? That was a blast. But the letdowns have been many and varied of late for Rory. I still expect him to play well at Bellerive but my guard is distinctly up.

Shipnuck: I never thought I’d say this but I’ve become apathetic. Rory has done this so much over the last few years — including the final round of this year’s Masters — it’s getting harder to say this isn’t who he is now. I loved watching him in his prime and want to see that again as much as anybody, but it was made glaringly obvious on Sunday he doesn’t have the same precision, consistency and control as Thomas tee-to-green and is nowhere near as good a putter, and while JT’s hunger was palpable Rory seemed as lost as ever.

Ritter: Rory has drifted a bit the past few years. Some of it was injury, some of it was probably life changes off the course. But this PGA sounds like a big, tough course that may play a little rain-softened. That’s straight out of the old Rory major-winning playbook. I think he’ll be part of the story this week.

Bamberger: I’ll never give up on McIlroy. I think the PGA is likely harder for him to get up for than, say, the Masters, but I expect that fact will serve him well in St. Louis.

3. Tiger Woods lost steam over the weekend at Firestone, closing the WGC-Bridgestone with rounds of 73. Sure, we can blame the heat for a little tiredness, but Woods looked a touch sluggish on the weekend. After his round on Saturday he said he was fine, but he’s also got a busy schedule ahead. He’ll play next week’s PGA and then have a week off before what could be three straight FedEX Cup Playoffs starts, making it five events in six weeks. Is Woods running out of gas?

Dethier: I wouldn’t be worried about Tiger’s fatigue this week. It’s the last major of the year and Tiger’s attention will be squarely placed on attacking Bellerive. He can take his foot off the gas at the Northern Trust and nobody will hold it against him…

Shipnuck: Tiger has showed this year that his best golf is good enough but he has been unable to string together four straight strong rounds. Is it mental fatigue? A back that is balkier than he will let on? Frayed nerve endings? The guy is still a specimen so I don’t think it’s that he’s physically tired. I think the reality is that he’s the 50th-ranked player in the world for a reason.

Bamberger: That is incisive, Alan, and I agree with all of it. The difference between 63-hole and 72-hole golf is the difference between being No. 50 and being a consistent winner and contender, of which there’s maybe a half dozen, tops. He can win again, at a regular Tour event against a B-field. It won’t mean that much to him. Carnoustie — The Open! With his kids there! — meant the world to him. Too much. As for this week, from the little I know of the course it just doesn’t strike me as a good course for where his game is.

Ritter: Not sure if he’s fatigued, but in this comeback, Tiger’s best opportunities to win come at courses where he can hit fewer drivers and play tactical golf. I don’t think Bellerive is that kind of track. He can win again if his health holds and he stays on his current path, but this doesn’t feel like the week.

4. The eight automatic spots for the U.S. Ryder Cup team will be finalized at the conclusion of the PGA, and right now there are plenty of worthy candidates vying to get in. Which one bubble player most needs to earn an auto bid in case he’s the odd man out after the four captain’s picks are made?

Dethier: I’m not saying I agree with it, but Bryson would be particularly easy to leave off as “a poor team fit” if he doesn’t auto qualify, right? Although he’s a particular favorite of assistant captain Woods. Xander Schauffele should also be sure to lock his spot in; a lack of seniority may have him on the outside looking in otherwise.

Bamberger: I agree with Dylan: Bryson makes it on points or not at all. Broadly speaking, that’s not only appropriate for a first-time player, it’s also smart.

Shipnuck: The first seven names in the current standings will be on the team even if any of them somehow get bumped out of the top eight. Tiger and Phil are locks, too, so that leaves three spots. The U.S. hasn’t won a road game in a quarter-century, meaning Furyk is going to want hardened Ryder Cuppers, and Le Golf National is tight and quirky, so I think Kuchar and Z. Johnson are sure to be picked. That’s eleven. So Bryson, Webb, Schauffele, and Finau are all competing for the last spot on the team. Only way for any of them to be sure they’re on the team is to be in the top eight a week from now.

Ritter: Can’t sum it up any better. I do think Finau’s major-championship consistency would help his case. But for that last spot, don’t you want to roll out a fiery rookie? I think Bryson would actually be a great pick. Let’s see how these next few weeks play out. 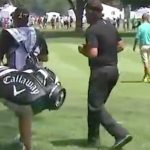 You may also like WATCH: Phil Mickelson breaks into his viral dance moves on the golf course

5. The USGA and R&A announced on Tuesday they are proposing regulations to green-reading materials, stating the ability to read a green should be based on judgement and skill and not a book that helps diagram the slope of a putting surface. Tuesday marked the beginning of a six-week feedback period. Under the proposal, handwritten notes will be allowed, although they cannot be a direct copy of a detailed green map. Are you for or against the ban of the books?

Dethier: I love the idea in theory; read it and putt it! Pure as can be. But I wonder what it’ll look like in practice — how much grey area remains in enforcing the rules and pushing the limits? I’m wary of more rules. Color me cautiously in favor.

Shipnuck: There’s a legal term for this: splitting the baby. It’s a bad compromise that will be a mess to enforce. The USGA shoulda just banned all green-reading materials whole-cloth.

Bamberger: You split the baby because you have no other choices. The governing bodies want to reward effort, in the map-making department. It will be hard to enforce but the players need to do that, more than the officials. It’s a work in progress.

Ritter: Gray area = trouble ahead. This panel is going to stay busy next year.

6. It looks like Phil and Tiger have a Thanksgiving weekend date for their big showdown. Does it immediately supplant the Lions and Cowboys as the must-see event around the holiday?

Dethier: Shaping up to be a heck of a sporting weekend, despite the Lions’ involvement (sorry, Ritter). During football season, it’s hard for anything else to register on the sports calendar, but if they do this Friday they’ll certainly steal some eyeballs.

Bamberger: It’s THE perfect date. I’d rather be playing myself.

Ritter: As a native Michigander and Lions sympathizer, this match will be No. 2 on my dial if it’s played opposite the football game. (At least until halftime, when the Lions are out of it.) But like everyone else, I think the date is a winner.