Tour Confidential: How much would you pay to watch Phil vs. Tiger?

Check in every Sunday night for the unfiltered opinions of our writers and editors as they discuss the hottest topics in the sport, and join the conversation by tweeting us @golf_com.

1. Phil Mickelson joined Twitter on Wednesday, and sure enough the $9 million match play event versus Tiger Woods was announced later that day for Thanksgiving weekend in Las Vegas. (GOLF.com first reported that discussions for the match were in the works.) Turner Sports will produce the match and offer it through pay-per-view and a premium streaming service. No information has been released about pricing. Should golf fans be miffed they have to pay to watch Tiger vs. Phil? Are you? And how much will golf/sports fans be willing to cough up to watch?

Josh Sens, contributing writer: The pay-per-view decision strikes me as tone-deaf. There was always a degree of cynicism behind the marketing of Phil and Tiger’s evolving friendship and rivalry. This just makes that cynicism more explicit. I was never especially interested in watching these guys play for other people’s money. (They already do enough of that.) Less so now. I’ll watch because I should, but not because I’m all that excited by it. No doubt some people will buy in, though.

Alan Shipnuck, senior writer (@Alan_Shipnuck): This ain’t the freakin’ Ryder Cup — I’m not sure there’s that much demand. For $9.99 some fans will tune in because it could be fun. For $19.99 only the lunatic fringe will buy in. Any more than that and it’s full-blown insanity. I guess in this ever-changing media landscape it’s worth a try but it’s hard for me to imagine PPV will be anything like blockbuster.

Josh Berhow, news editor (@Josh_Berhow): Golf fans have the right to be a little peeved. The vast majority of the golf world was giddy about this event when Shipnuck broke it last month. And then you start to see all the orchestrating behind the scenes like the Masters practice round and Phil’s timely Twitter account. You can tell this is a show. Not a golf match. And those fans who were pumped to watch are probably now a little bummed they didn’t see the pay-per-view angle coming. It’s hard to blame the network — you gotta make money — but there’s a lot of pressure on Phil and Tiger (and producers) now to make sure this isn’t a flop.

Dylan Dethier, associate editor (@dylan_dethier): This whole thing feels weird and forced now. It still has potential, of course — it’s Tiger and Phil! And we’re still months away. But there’s something particularly appealing about the secret money matches that big-time pros must play against one another at their home clubs, when they are most truly themselves. This feels like the opposite of that.

Michael Bamberger, senior writer: I can’t tell you how bored I already am of every aspect of this match. Whatever mild interest I had has left the building.

2. Bryson DeChambeau built a four-shot lead after 54 holes at The Northern Trust and never left the outcome in doubt on Sunday, shooting 69 and beating runner-up Tony Finau by four. DeChambeau was the first man out in Ryder Cup auto qualifying after the eight spots were solidified after the PGA Championship. Has this victory, his second of the season, guaranteed his spot when captain Jim Furyk announces the first three picks on Sept. 4?

Shipnuck: It’s done and dusted. With Tiger and Phil as locks, the only intrigue is now around the final pick, though Finau’s strong second at Ridgewood may have taken away all of that suspense, too.

Bamberger: I agree on Tiger and DeChambeau. One player will “earn” his way to the team based on what he has done all year, and what he does in Boston. The final player the same, except after Philadelphia. Could be Finau and Zach Johnson. Could be Snedeker and Phil.

Sens: What Alan said. DeChambeau was already putting up an impressive season. Add this further evidence of “recent form” and he’s a shoo-in.

Berhow: He’s in! Lots of practice rounds with Tiger, too. Wouldn’t be surprised to see them team up.

Dethier: Ditto to the above. Bryson was awesome in Jersey this weekend and becomes another fascinating piece of an eclectic (and impressive) U.S. team.

3. With captain’s picks looming, DeChambeau and Finau were among those to beef up their resumes. But, with one event remaining to prove themselves (and with the final pick coming a tournament after that), which Ryder Cup captain’s pick hopeful took the biggest step backward at Ridgewood?

Shipnuck: DeChambeau and Justin Thomas will be rookies. If Furyk wants to add another veteran instead of a third rookie in Finau the only options that make sense are Zach Johnson and Kevin Kisner. Given the disparity in their resumes, Kiz needs to clearly outplay Zach but the opposite happened at Ridgewood. So, I’ll say Kisner here.

Sens: I wouldn’t necessarily call it a big step backwards, but a stronger weekend might have thrust Xander Schauffele and Matt Kuchar into the conversation.

Berhow: I’m with Sens. After the eight auto picks I figured Tiger and Phil would be locks with a veteran like Kuchar next in line. But Bryson doubling down with this victory and Finau coming up big at Ridgewood (coupled with his birdie barrage when grouped with Furyk at the PGA) tells me competition for that last spot will be intense.

Bamberger: I just don’t see Phil as a lock. Now is an excellent time for him to become an assistant captain, and a captain-in-training. I don’t see Furyk having any trouble telling Phil that. He’s had a great run. He’ll be an interesting and original captain. It’s the cruelest and greatest aspect of golf, that Phil still needs to play his way on to the team, at this late date.

Dethier: Xander Schauffele had a six-footer on his final hole to make the cut on Friday and missed it. He seems to have disappeared from the conversation now, even though the guy was 10th on the Ryder Cup points list. That’s crazy! Finau’s been fantastic, so it’ll be tough for anyone else to play their way back in. 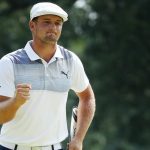 4. Tiger Woods played well tee to green but never got his putter working in the opener of the FedEx Cup Playoffs. Woods, who lost nearly five strokes on the green, said he had trouble seeing the lines but didn’t seem overly concerned. Brandel Chamblee, however, said Woods’s age, 42, could be a factor. “One of the reasons sport is so cruel to middle-aged men is they begin to lose their eyesight,” he said. Is Chamblee on to something, or can we chalk up Woods’s putting woes to technique or simply a bad stretch?

Shipnuck: Who knows? It’s plausible, given all my friends in their 40s are now getting glasses and Lasik and using the flashlight on their phone to see menus better. Tiger’s stroke still looks pure so since he’s not making any putts, and has often been iffy on the greens this year, you have to start wondering about other causes.

Sens: Woods sure rolled it beautifully just a couple of weeks ago at the PGA. Putting is a fickle thing. Who knows. Maybe eyesight is an issue. Unlike many others, Woods presumably has excellent healthcare coverage, so it would be easy enough to find out, and possibly worth it. A quick trip to the eye doctor just before the Masters sure did wonders for Patrick Reed.

Berhow: I’m not gonna jump to conclusions and say he needs Lasik again; no one really knows. I just think he had a bad week of putting. Sometimes a bad putting week vs. a good putting week is two total inches.

Dethier: I dunno — he definitely hit a lot of good putts Sunday that looked like they were going in and then somehow didn’t. I expect more will fall next week. But Brandel has a seemingly endless supply of flaming-hot takes that are 75% ludicrous, 25% compelling. It’s a combo I can’t get enough of.

Bamberger: He made more putts in his 20s and early 30s than Ernie, Davis, Vijay made in their careers, combined. (Only being slightly hyperbolic.) It is unreasonable and greedy to think it could keep going that way forever.

5. Augusta National’s Eisenhower Cabin is being renovated, as the club plans to update the historic building’s infrastructure with a modern touch. What Augusta National architectural update would you like to see next?

Bamberger: With more and better food opps, and friendlier service.

Sens: The 7th tee brought back to its original location.

Dethier: Maybe some affordable housing in downtown Augusta? The contrast of the National and the surrounding area is awkward and uncomfortable, to say the least.

Bamberger: The updates have already started to bury the genteel charm of the old club. What is the opposite of an update?

6. Phil finally joined Twitter! Who else from the golfing establishment would you like to see pick up a Twitter handle (and, yes, Michael Bamberger is an acceptable answer)?

Shipnuck: Bamby is the obvious choice indeed. But at this point it’s almost better to not give in and maintain his Salinger-like mystique, so I’ll say Fred Ridley. He loves golf and knows golf and it would be awesome to get a little more insight from deep within the Kremlin, or, ANGC.

Bamberger: That’s good, Alan — the part about Ridley. Could you tweet that out for me (if that locution is correct)?

Berhow: I want Rory McIlroy to take his back from his management team or wife or whoever is running it now. Rory on Twitter is golf at its best.

Sens: I dunno. I think one of the last things golf needs is more people on Twitter.

Dethier: Seconded. Can I use my wish to take Phil’s away? That smack-talk with Tiger nearly made me log off forever.