Tour Confidential Daily: Who has been the biggest bust of the PGA Championship so far?

Pre-tournament favorite Rory McIlroy has yet to break par, career-grand-slam chaser Jordan Spieth is 11 off the lead and Phil Mickelson is headed home early after one of the worst major performances of his career. Who has been the biggest bust so far at the 99th PGA Championship at Quail Hollow?

Sean Zak: I will refrain from doubting Spieth or McIlroy, as each could shoot 65 Saturday and immediately lose “bust” status. Phil is the obvious and correct answer. The guy had more success at this course than any non-winner in Quail Hollow history. He had 11 top-12 finishes in 13 tries. Eleven! That first-round 79 (with no birdies) is as puzzling as any golf he’s played in a long time.

Alan Bastable: Um…DJ, anyone? Five months ago we were ready to hand him all four major trophies. Now, at 10 off the lead at the PGA, he’s on the brink of his fourth consecutive major flop (British Open—T-54, U.S. Open—MC, Masters—couch).

Michael Bamberger: I am not comfortable ranking negatives but Phil looks lost without Bones and the physical swagger is not there, literally down to his shoes. His swing is still long and powerful. He is surely telling a deep and painful truth when he says his mind is not there. He has played golf chiefly for the majors and the cups for years. Maybe when he was home during the U.S. Open he liked it more than he would care to admit. Pure guesswork but what more does he have to prove? Having said that, the next two U.S. Opens, Shinnecock Hills and Los Angeles Country Club, are ideal for him. He has looked done this year but he’s likely not. 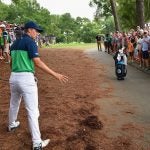 Josh Berhow: Gotta be Phil, right? Mickelson just didn’t look like himself this week. He’s always sprayed it here and there and made some unbelievable Phil-like escapes from trouble, but the latter never happened this week. I think Jordan is a close second, though. He’s not out of it — yet — but for some reason I was tricked into thinking he would come out on fire and make some history this week. Maybe not a complete “bust” by definition, but a surprise for sure.

Jeff Ritter: Rory’s a surprise because this course rewards the power game, but through a combination of missed fairways, loose irons and spotty putting, he’s managed to get very little out of it. If Quail stays soggy on the weekend, Rors could toss up two 65s—but that still might not be enough to erase 10 shots.

Josh Sens: Aside from Steph Curry, a colossal disappointment this week, and the other well-reasoned choices in this thread, Jon Rahm has also underwhelmed so far. Big hitter with big expectations swirling all around him but he has not looked especially sharp.