Tour Confidential Bonus: Will Tiger win the Valspar? And what would a victory mean historically?

In the wake of Tiger Wood’s 54-hole run at the Valspar Championship, our GOLF.com team convened an emergency roundtable session. Check in every Sunday night for the regularly scheduled Tour Confidential and the unfiltered opinions of our writers and editors, and join the conversation by tweeting us @GOLF_com.

1. Tiger Woods — Tiger Woods! — is one off the lead with 18 holes to play in the Valspar Championship. Will he prevail today?

Michael Bamberger, senior writer, GOLF: There are too many quality players above him, with him and below him. His time is coming but today seems unlikely. Note: Everything I predict about Tiger Woods is wrong.

Jeff Ritter, digital development editor, GOLF.com (@Jeff_Ritter): It’s a crowded and accomplished leaderboard, but it sort of feels like this is his time, doesn’t it? (Even though his time has arrived much sooner than any of us could’ve imagined after his surgery.) I Don’t know how he’s going to do it, but I think it’s gonna happen: W No. 80 happens today.

Josh Berhow, producer, GOLF.com (@Josh_Berhow): No, but only because I think this is all happening too fast and Tiger winning(!) a tournament this soon in his return seems almost too good to be true, so I’m being pessimistic. Regardless of what he shoots today he’s already proved enough. He’s back, and he’s ready to win again.

Alan Shipnuck, senior writer, GOLF (@AlanShipnuck: It makes absolutely no sense for Tiger to win this soon, which means it’s destined to happen.

Jessica Marksbury, senior editor, GOLF.com (@Jess_Marksbury): My heart says YES! My head says probably not. And that’s OK — there’s a big tournament in Georgia soon where a win out of the blue would be even sweeter. And to reiterate my colleagues, no matter what happens today, it sure has been fun to watch, and TW’s already stellar play is surprising in the best way, and it bodes well for the rest of the year. Bamberger: What will he shoot? Seventy, with much short-game help.

Marksbury: Agree with the 68, Jeff. This is a big moment for Tiger to come through in the clutch. I’ll be really surprised if he isn’t at least close at the end.

Bastable: 68, including a double bogey on the front nine. 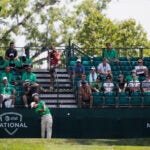 3. If he gets it done, put some historical perspective on what this victory would mean.

Bamberger: The first win of the rest of his (newly reconstituted) life.

Ritter: It would stand alongside the 1996 Las Vegas Invitational as the most significant non-major victories of his career. Both stunning and sooner-than-expected, in their own way.

Berhow: One of the greatest, most satisfying wins of his career. And that might be selling it short.

Shipnuck: Yeah, it would rank up there with the ‘97 Masters and ‘00 and ‘08 U.S. Opens. Tiger has been to hell and back in the last decade – physically, emotionally, spiritually. To win again at 42 with a fused spinal cord would be a monumental achievement, a towering accomplishment. If/when it happens the hyperbole will be overwhelming… and, for once, justified.

Marksbury: Is it a major? No. But in my mind, it would still be one of the greatest — if not THE greatest — comeback in sports.