Tour Confidential: Are you buying or selling Jordan Spieth stock for 2019? 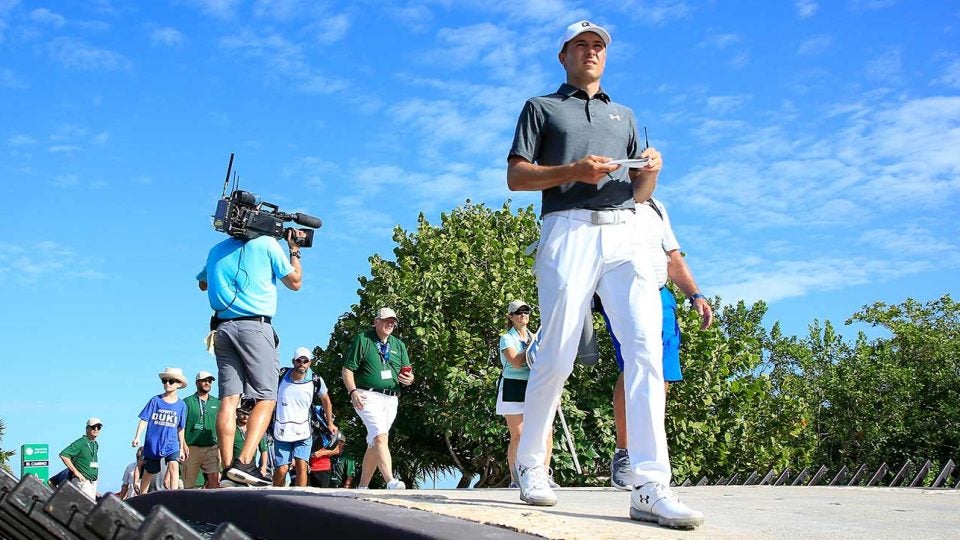 Check in every Sunday night for the unfiltered opinions of our writers and editors as they discuss the hottest topics in the sport, and join the conversation by tweeting us @golf_com. Tonight we discuss Jordan Spieth’s 2018 season (and look ahead to ’19), big wins from two well-known veterans, and new PGA of America president’s to-do list and more.

1. Jordan Spieth, who was just passed by Tiger Woods in the OWGR last week, ended the 2018 calendar year with a missed cut at the Mayakoba. It’s his first winless year on Tour since 2014. Are you buying or selling Spieth stock for 2019?

Sean Zak, assistant editor (@sean_zak):  Buy, buy, buy! Today I was reminded that he was one decent drive away from possibly the greatest round in major championship history. Of course, I’m talking about the Masters. His game is built to succeed on tough golf courses (like Carnoustie), and I imagine he’ll tighten his game up in the spring.

Jeff Ritter, digital development editor (@Jeff_Ritter): His Masters final round was indeed epic, and no doubt we’d look at his whole year differently if he’d caught Reed that afternoon. I’m buying a bounceback season in ‘19…but his putting stats this season were concerning. Gotta get that fixed.

Dylan Dethier, associate editor (@Dylan_Dethier): Now seems like a bad time to sell Spieth stock — the guy doesn’t have a top-five finish since the Masters! It can only get better, and his putter will be better. But I’m not particularly bullish on Spieth’s 2019. It’s a good bet he’ll contend at Augusta, though.

Alan Bastable, executive editor (@alan_bastable): Right, it’s like the old Wall Street adage — buy low, sell high. Still, golf is a funny game. It’s also hard to fathom that Tiger hasn’t won a major in more than a decade or that Rory has won just once since 2016. Most troubling about Spieth isn’t so much that he’s not winning but that he’s just not contending all that much. Last season he had just five top 10s. Compare that to the previous three seasons when he racked up a combined 35.

Michael Bamberger, senior writer: Or the Warren Buffett adage: buy and hold. I like Spieth’s next 20-plus years. 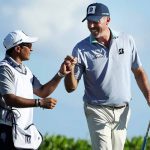 2. Which was the more impressive drought-snapping win on Sunday: Matt Kuchar at the Mayakoba or Lee Westwood at the Nedbank Golf Challenge?

Zak: I’ll take Westwood, who was seven behind Sergio after 18 holes. Westwood played the final 28 holes in 11 under to chase Sergio down and beat him by three. Kuchar won the birdie-fest against non-HOF players.

Ritter: Kooch had a subpar season and it was nice to see him get off the schneid, but Westwood was a total shock. Feels like we hadn’t heard a thing from him since we heard, um, not much from him at the 2016 Ryder Cup. At age 45, it’s possible that could be Lee’s last Euro Tour title. If it is, that final-round comeback was sweet.

Dethier: The most impressive thing was the incredible statistical anomaly pointed out by Golf Channel’s Justin Ray: Westwood hadn’t won since 4/20/14. Kuchar also hadn’t won since, you guessed it: 4/20/14. That’s cosmic.

Bastable: Whoa, trippy stat. Westy’s reemergence was wayyyy more stunning. I think most pundits had written him off as a ceremonial player at this point, while fairway-splitting Kooch feels he could be a threat on select courses for at least another decade. Hell, at watery Le Golf National he might have been a more effective contributor to the Yanks as a player than he was as a vice captain.

Bamberger: I’ll say Westwood only because his name never crosses my mind, although I do recall that both gents were assistant captains in Paris this year.

3. What’s the most unlikely or outrageous caddie story of the week: Kuchar winning with a local looper, Kuchar’s wife filling in for Zach Johnson, or the caddie who contradicted his LPGA hopeful when she pleaded her case after being DQ’d from LPGA Q School?

Zak: From what is sounded like on the grounds, a caddie wilting in the extreme Mexico humidity wasn’t all that shocking. Begrudgingly, I’ll say Kuchar was most unlikely. Few things make a regular looper feel purposeless than when the player grabs someone else for the week and wins it all.

Ritter: PGA Tour Caddie Swap sounds like a good name for an absolutely doomed-to-fail reality show. But I can’t recall encountering anything like this LPGA hopeful, the interference from her mother and the caddie subsequently following his conscience (and the rules of the game). Totally bizarre.

Dethier: I was in the gallery for the Sybi Kuchar/El Tucan caddie duo, and it was fun and quirky. But a caddie selling out his player, besmirching her character forever? I’m with Ritter. That’s unprecedented stuff.

Bamberger: Or rare, anyway. In 1978, at the Milwaukee Open, Mark McCumber’s caddie quit on him because he believed that McCumber, in his second Tour event, whiffed in the woods and did not count it, though McCumber maintained it was not a swing and a miss but a practice swing.

Bastable: Where’s John Wood when you need him to weigh in?! (JK, Woody!) Yeah, big week for caddies, and we didn’t even mention the Euro Tour looper who called his man “crazy” for thinking about playing a high-risk shot from the rough. But, yes, Doris Chen’s caddie calling out his boss for questionable behavior? That was exceptional. That entire episode was the most bizarre occurrence of the season. And there’s not a close second.

4. Suzy Whaley was officially introduced as the first female president of the PGA of America. What’s the one issue or topic you would like to see Whaley tackle first?

Zak: Anything she can do to make golf’s governing bodies less old, rich, white and male-focused. I think she has PLENTY of potential to do so in that role.

Bamberger: Well said, young Zak, though I hope, for your sake, you are someday old, rich and white. I think Pres. Whaley and the PGA are headed in this direction already: more programs at public schools where kids can be introduced to the game. If they get bit by the bug, they’ll find a way to a course and to equipment.

Ritter: Probably access. Golf’s participation continues to sag, but there are some 28,000 PGA of America members standing at the ready. Can she help get that group pulling the same direction around inclusivity? It’s a tall task.

Dethier: Both winners. This is more trivial, but I’d love to see her establish an identity for PGA Championship host courses. The list looks stale at the moment. Why not take the opportunity to highlight new courses and creative designs rather than some of the more staid classics? I may be the only one who wants more Chambers Bay, but I’d love the Fourth Major (™) to have a little more edge to it.

Bastable: One complaint I’ve heard from at least a couple of club pros is that the PGA spends too much time and energy sweating the PGA Championship and Ryder Cup and not enough tending to its member pros. I think there’s a feeling that the association could do more to help fill the pros’ lesson books. In an era when digital instruction has come to the fore, I’ll suspect you also see Whaley, Seth Waugh and the rest of PGA brass spend more time thinking about how to connect teachers to students in the virtual space.

You may also like Madam President: New PGA of America prez Suzy Whaley on breaking barriers in golf

5. A pro was denied a shot at the final stage of European Tour Q-School when he raked a bunker he walked through when stepping off yardage on his final hole. The two shots were assessed because he improved his line of sight. The governing bodies have been working hard to make the rules more reasonable over the last couple of years. Is this another rule that should be modified?

Zak: I think all tournaments should allow for some alternate understanding of the Rules. While I don’t want to undermine the purpose of the Rules, this was one of those unintentional loopholes, for lack of a better word, where the player’s intentions were clear AND genuine AND fair…and the Rules got in his way.

Ritter: I mean, it’s just brutal that this obscure ruling cost a guy a shot at a job on a pro tour. I don’t like the rule. But if you’re auditioning for a job as a touring pro, you kinda need to know the rule book, don’t you?

Dethier: There’s no defending this rule. It wasn’t actually improving his line of play, at all. Common sense needs to take over at some point, no?

Bamberger: I don’t even understand it.

Bastable: If Bamberger doesn’t understand it, we have a problem here, people. The cruelest part of this situation is that the dude made an ace in the round (on his eighth hole) and birdied five of his last six to get him into a playoff (or so he thought). A harmless bunker-raking job should not have been his downfall.

6. It’s that time of the year again: open season for applying to work at Augusta National during Masters week. What Masters job would you most like to land?

Dethier: I guess this makes my decision easy. Wonder if they’ll introduce any more obscure qualifying categories between now and then.

Ritter: My job. It features access to the entire course and a few exclusive spots (lunch in the clubhouse? Why not?) an opportunity to write the first draft of history and — rather than standing in one spot all day like many volunteers — warm meals and comfortable leather chairs in the posh press center. It’s all for the readers, of course.

Bamberger: Shipnuck couldn’t be here tonight but he asked me to accept for him in his absence: collecting samples for spot drug-testing.