ST. LOUIS — Tiger Woods got off to a distinctly sour start at the PGA Championship. After a wayward tee shot led to bogey at his opening 10th hole, Woods made an unforced error with a tugged iron shot at No. 11. He badly misjudged a wedge shot from the rough and his approach found the water short and right of the green, turning a birdie hole into an early double bogey — the only player in the entire early wave to make 6 or worse on the hole.

After a shirt change on the sweltering St. Louis morning, things got distinctly better from there for Woods, and just in time: with playing partners Justin Thomas and Rory McIlroy notching multiple birdies at the early holes, the tournament seemed like it could already be slipping away from the 14-time major champ. After finding the fairway at No. 12, he flew his wedge shot just past the pin and nearly zipped it back into the hole, leading to a kick-in birdie. 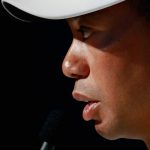 You may also like ‘A very surreal time’: Tiger Woods reveals how a 17-hour drive after 9/11 changed him

The birdie didn’t flip an instant switch; Woods’s round remained hard work. At No. 15, he pinballed around the left trees with his first two shots before recovering for a masterful par save. Another pull-hook at No. 16 required him to get up-and-down for bogey, and a poor drive prevented him from taking advantage of the par-5 17th.

An all-world par save from Mr. @TigerWoods. pic.twitter.com/2OTgMHPCKZ

Woods played relatively stress-free the rest of the way. He stuffed in his approach shot at 18 to inside five feet and converted the birdie putt to turn at two-over 37.

A birdie for Tiger to close his front 9. #PGAChamp pic.twitter.com/SD9ObOGZ7n

He added another birdie at No. 1 and turned to a recipe of fairways, greens and pars. He saved pars at 4 and 6 from off the green and just missed birdie putts elsewhere. He converted a final birdie of the day at the par-5 8th, where driver and 3-wood got him greenside in two.

A birdie at No. 8 for @TigerWoods moves him to even with one to play.#PGAChamp pic.twitter.com/Bktfz6U2rC