‘A very surreal time’: Tiger Woods reveals how a 17-hour drive after 9/11 changed him

ST. LOUIS — The last time Tiger Woods was at Bellerive Country Club, he left in a haze. “I literally haven’t set foot on this golf course since that week in 2001,” Woods said at his PGA Championship pre-tournament press conference. “That week” was the week of September 11, 2001; Woods was playing a practice round for the WGC-American Express Championship at Bellerive with Mark Calcavecchia on 9/11 when planes struck the Twin Towers in New York.

Woods, calling the experience “surreal,” said he agreed with PGA Tour commissioner Tim Finchem’s decision to cancel the event. “One of the towers had fallen on the American Express building, and a lot of people lost their lives,” Woods said. “The people at American Express were struggling at the time, and I think Tim made the right move in cancelling the event.”

Woods went on to stress the way in which the events of 9/11 affected him personally. With planes grounded across the country, he commandeered his courtesy car and began driving — all the way from Missouri to his Isleworth home in Florida. “I drove home on the 13th; it took 17 hours to get back home to Florida,” Woods said. “It was a very surreal time for myself on that drive and a lot of reflecting.” 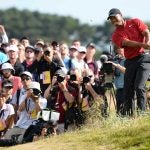 You may also like He’s stolen our hearts again, and this version of Tiger Woods may be the most interesting of them all

The effects of 9/11 would prove to have a tangible impact on Woods and the mission of the his foundation. Woods realized that he desired a shift from what had been a golf-focused enterprise, a “traveling circus” featuring his clinics and appearances to benefit local charitable organizations. If something were to happen to him, Woods realized, the foundation would have little enduring value.

After a couple weeks back in Isleworth, Woods called his father about a new mission for the foundation. “I said, well, it has to be along the lines of how I grew up. It was family, then academics, and then golf, or whatever sport I was playing at the time.”

Earl Woods was immediately receptive to the idea. He helped secure a lease for the Tiger Woods Learning Center in Anaheim, and at a good price: just a single dollar per year. “Lo and behold, we’re — we have now what? Fifty-three different curriculums that are based in STEM” (science, technology, engineering, and math).” Of late, Woods has grown fond of one recent story in which one student at the center was completely unaware of who Tiger Woods was.

“So that one drive changed our entire directive of my foundation,” he said.