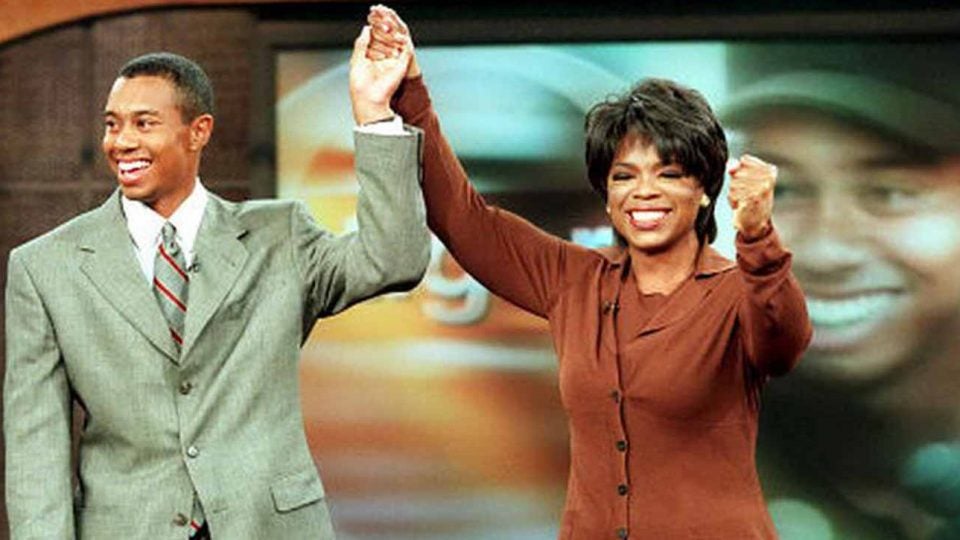 Here at the Tiger Woods YouTube Project, we’ve seen amateur wins and we’ve seen the lead-up to professional wins, too. But now we’ve arrived at 1997, which is an extremely significant year in the life of Tiger Woods the man, the athlete, the brand and the public figure. Most importantly, it’s the year of Woods’ first green jacket. But it’s also the year of Charlie Pierce’s GQ cover story. We’ll touch on the importance of both — and a bunch of other things — through Woods’ sitdown interview with Oprah Winfrey!

My understanding is that before the 1997 Masters, before he had won — or contended — at a major championship, Tiger Woods was already the most famous golfer in the world. But then, on April 13, Woods won the Masters. By 12 shots. You know all about that, though. Feel free to watch those clips as supplemental homework. But on April 24, Tiger (and his father Earl) went to pay a visit to one Oprah Winfrey for a full-length sit-down interview (31 minutes without commercials).

Looking back, it’s amazing to see Oprah and Tiger, two iconic one-name stars of their generation, get into the meatiest, biggest-picture topics of the 21-year-old’s career to date. They discuss fame. Race. Success. Identity. The entire thing is worth a watch — so we did! And would encourage you to do the same. Here’s the clip, followed by 10 things I took away from my first viewing.

Oprah really get straight to the point here, huh? Dives right to the juicy stuff, asking about Woods’ hate mail in the first sentence! But credit to her, because we instantly learn something extremely telling about Tiger Woods: he was reading all those letters he got in the mail.

“It reminds me of what I have to try and do. As people know, golf has been kind of an elitist sport …” he begins. This is interesting, too. For Woods, it’s clear that some of his motivation comes as a representative of golf’s underrepresented. “I got kicked off of golf courses numerous times, been called some pretty tough words to my face when I was even that old,” Woods says, referring to the video Oprah has just shown of his 2-year-old self. (In this space, we won’t tackle the story he recounts of abuse on his first day of kindergarten, about which much ink has been spilled.)

Instead, it’s worth wondering how much of that behavior has continued on until today. Woods doesn’t seem to send tweets on his own anymore, like he used to. But does he scroll his mentions? Manage his emails? Read the tabloids? For his sake, we hope not. But we’re inclined to think he’d enjoy the Tiger Woods YouTube Project. No comment section, for one thing.

Anyway, here’s what he said about the ads:

“It’s something that Nike … they know me. They felt the same why I did, that golf needed to be shaken up,” he says. “Unfortunately that’s kind of an issue where there’s no grey area, you either like it or you don’t. But whether you like it or you don’t, it’s going to make people talk, and that’s how change occurs. Making people aware of a situation and then they can talk about it.”

That second-to-last line in particular seems wise. “It’s going to make people talk, and that’s how change occurs.” Well said. And he follows it with a nifty denial that he knew anything about Nike’s ad plans until after he turned pro, thus skirting any rules … 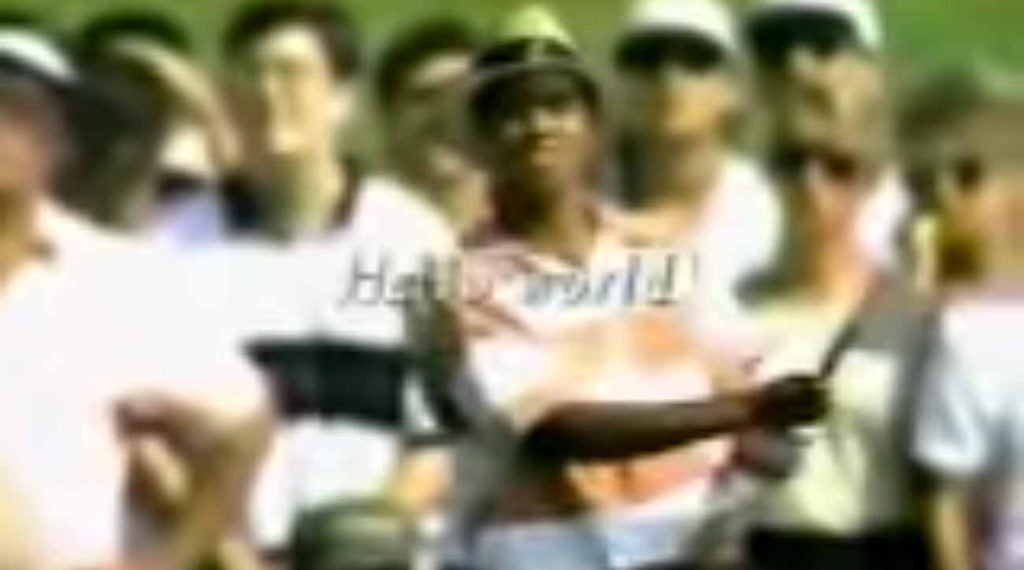 If you squint just right, you'll see this is the grainy "Hello World" Tiger commercial that remains on YouTube.

3. He was going to get his degree from Stanford.

Oprah draws repeated connections between herself and her guest, which seems to help him open up. This was an interesting nugget: even after dropping out of Stanford, Woods was planning to attend “correspondence classes” and get his Stanford degree. He has mentioned, since then, a lament that he didn’t stay for another year, but we’ve not heard much about that degree since then. Makes you worry for the man’s future!

“Golf is something totally different than education,” Woods says, describing that motivation. “Going back to when I grew up, my parents wouldn’t let me practice unless I had my homework done.”

I wasn’t old enough to have any concept of it at the time, but it’s clear that Woods’ relationship to his race — and the desire of other people to define it — had become contentious. It’s also clear that Woods was unwilling to be confined to a single title.

“I’m a Cablinasian,” he tells Oprah. The Ca, he explains, is for Caucasian. The bl is for black. The in is for Indian (Earl is part Native American) and asian represents his mother Tida’s side. As Oprah says, “That’s why you’re America’s son!”

5. Earl Woods’ most famous parenting tactic had nothing to do with Tiger.

It’s only one segment before father/author Earl enters the arena! I can’t help but notice how often he answers parenting-related questions with the phrase, “a child …” which is an interesting approach. He clearly sees some universal application to his success with Tiger. But I guess that’s the same confidence that would inspire him to write a book entitled Training a Tiger: A Father’s Guide to Raising a Winner in Both Golf and Life.

Oprah asks Earl about his most famous parenting tactic, one mimicked by untold thousands of golf-loving parents since: taking young Tiger into the garage to watch Earl hit golf balls from his high chair. Was that intentional, Oprah asks, as a way to improve his own game?

“Quite frankly, no,” Earl says. “I was trying to improve my own game!” 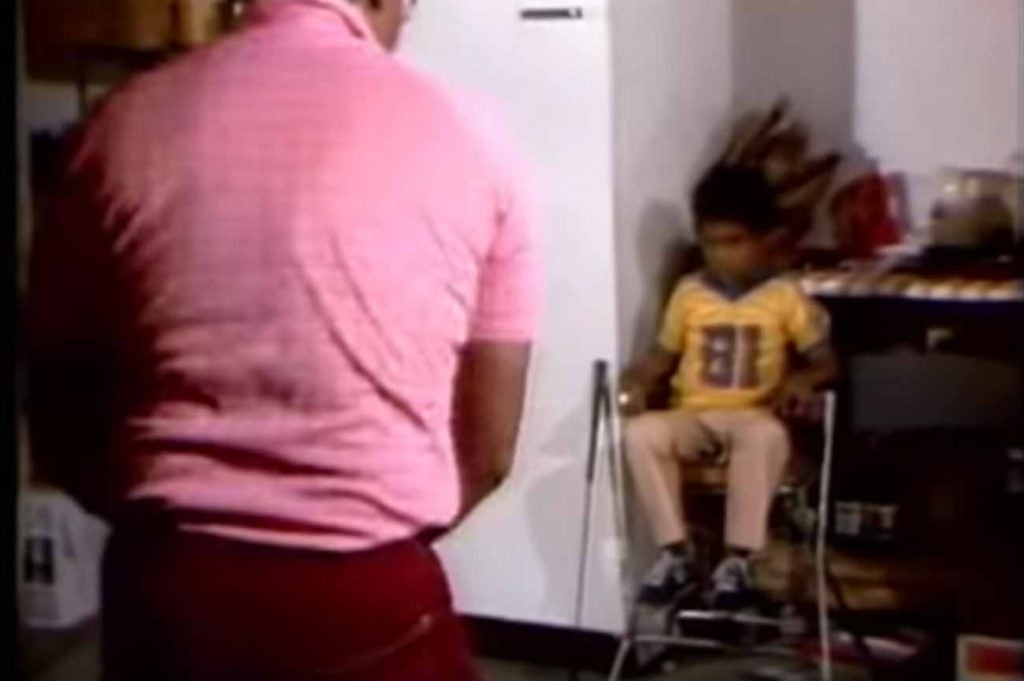 Tiger Woods would watch his father Earl hit golf balls in the garage from a young age.

6. Earl explains why he was so sure Tiger would win the ’97 Masters.

Earl had not been shy in predicting a victory at the 1997 Masters — and Tiger had delivered to the tune of a 12-shot shellacking of the field. When Oprah asked him why he’d been so confident, Earl gave another assured response (and didn’t sell himself short, either):

“Because I had cleaned up everything that was a problem in his mind and that left the determining factor: talent. And I said I’ll take Tiger’s chances with talent any day of the week with anybody on a golf course.”

7. Tiger was disillusioned with the media.

What’s clear from the subtext (and sometimes just, like, the text text) is how much the Charlie Pierce GQ cover story on Tiger upset Woods and his camp. Masters win or not, it’s still fresh in his mind.

The article, for the uninitiated, is one of the best pieces of sportswriting — but it’s also an unvarnished look at 21-year-old Woods making dirty jokes and speaking openly. It may not have singlehandedly changed his approach to dealing with the media, but it certainly got the ball rolling, and raised his levels of suspicion.

You can hear it in the way Woods talks about writers and their “selfishness,” and in the way he laments his loss of privacy.

“Oh, it’s gone,” Oprah tells him. “You have been on the cover of the Enquirer with your girlfriend from high school, believe me I have been through that.”

Oprah seems to have no great love for the media, either, who she says “set up” Tiger. “He’s learned not to tell any jokes around reporters any more,” she adds. 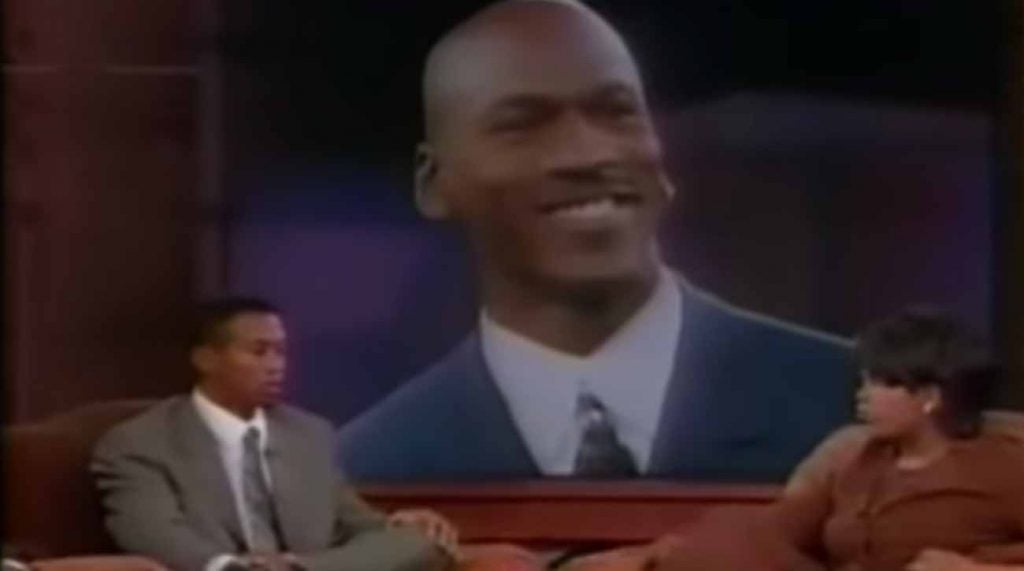 Tiger and Oprah talking about friendship with Michael is some serious star power.

9. He explained his friendship with Michael Jordan.

How did Tiger Woods and Michael Jordan become friends, anyway? Woods explains that he reached out to the basketball legend, thinking he was tracking on a similar path. Bold? Yes. Wrong? Definitely not. Here’s how he describes it:

“I guess my association with Nike did help that. But Mike’s in position where I think my life is going. And I went through some problems, I didn’t know how to handle certain situations. Like dealing with visibility, loss of privacy, articles, just people in general, and Mike helped me out because Mike has already been there.

“He’s established himself as probably the best basketball player that’s ever lived, and he’s so well-known that what better person to relate to me than not a movie star, celebrity or anything like that but a guy who’s down to earth, who’s an athlete, who can relate to another athlete. And Mike is almost like my big brother right now.”

“Once you put limits and boundaries on yourself, that’s what you’re confined to. One thing that I always believe is that you should never ever limit yourself. Be creative, go beyond expectations of not only yourself but expectations of a human being. Go beyond that. Be creative!”

News
Tiger Woods’ first-ever Nike ad campaign: What do we make of it now?