Tiger Woods’ first-ever Nike ad campaign: What do we make of it now? 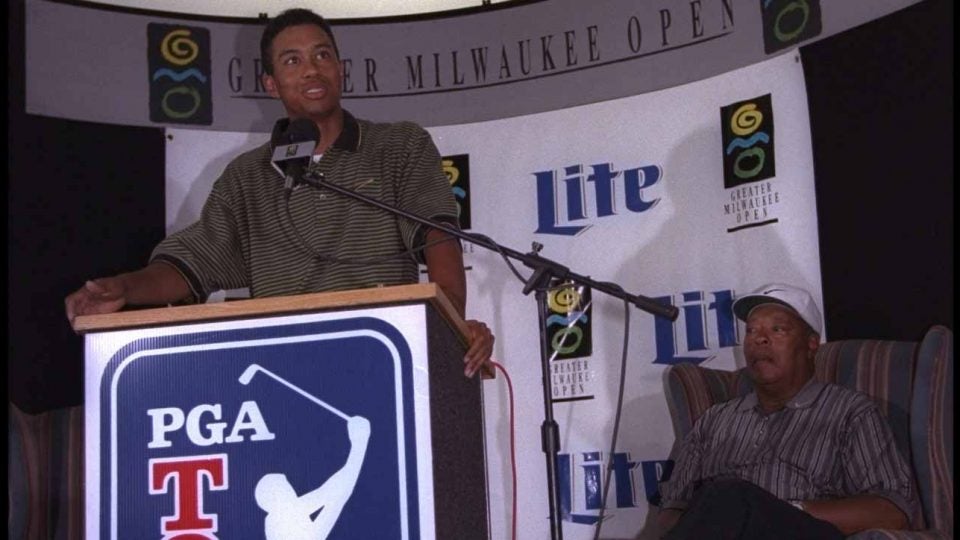 Welcome back to the Tiger Woods YouTube Project, where we’ve officially turned pro! As August 1996 rolled around, there were two sides to the Tiger-turns-pro story. First, there was Tiger himself, which we covered with Andy Johnson and Brendan Porath in our last episode (by way of his Curtis Strange interview). The other side was the Nike side. The now-legally-commercialized side. Tiger the brand. Let’s dive in!

By the time Woods actually turned pro, he was already the biggest name in the sport. Golf was about to go global, and Nike Golf was planning to do the same.

On Wednesday of the Greater Milwaukee Open, Woods showed up at his press conference decked head-to-toe in Nike swooshes. He said, among other things, four words that would resonate: “I guess, hello world.” The “I guess” was important because it sold the authenticity of the moment. “Hello World” became an ad campaign just two days later, with 30- and 60-second television commercials plus extensive print advertisements.

Woods’ much-anticipated pro debut was not without detractors. Strange’s interview spoke to skepticism from Tour vets. Even Steve Stricker admitted to the New York Times that there was plenty of resentment around Woods’ mega-ad deal.

“No doubt about it, especially with the money he’s getting,” Stricker said. “The No. 1 player in the world isn’t getting that kind of money. Here’s a guy who hasn’t got his tour card yet and he’s making $43 million?”

Shortly thereafter came “I am Tiger Woods.” This campaign was built on Woods’ universal appeal and, well, give it a watch. Boys and girls of diverse backgrounds — decidedly not the typical country club set — stream towards the golf course. It’s a bold, powerful message.

What do we make of all of this? I’ve brought in a renowned expert — aka my buddy Taylor — to break it down. Taylor and I grew up playing a lot of golf together and he now works at St. Andrews School in Delaware, where he has taught a sports journalism class and consumed an unhealthy amount of golf-related content. He insisted that I tell you in advance that he’s hardly an expert, but maybe that’s the point. Plus, I get to make the rules! Here we go:

Dylan Dethier: What’s some background pre-reading golf fans should dive into before watching “I am Tiger Woods?” Favorite excerpts? Any beverage that pairs particularly well with good journalism?

Taylor Foehl: There’s nothing better than when great sportswriters tackle a subject as compelling as Tiger Woods. There have been great stories written about Tiger at every stage of his career, but profiles of early Tiger produced some real classics. At least once a year, I try to prepare myself a Dark ‘n’ Stormy and read “The Man. Amen.“ by Charles Pierce, which ran as a cover story for Esquire just before Tiger’s first win at Augusta ’97. Gary Smith’s “The Chosen One,” which accompanied Tiger’s cover on Sports Illustrated as the 1996 Sportsperson of the Year, is also fascinating, almost hauntingly so, to look back on. Both are incredible works of journalism, and are great time capsules into Tiger and the world around him in that moment.

My favorite line from Pierce:

To both Pierce and Smith, Earl is as much the subject as Tiger. 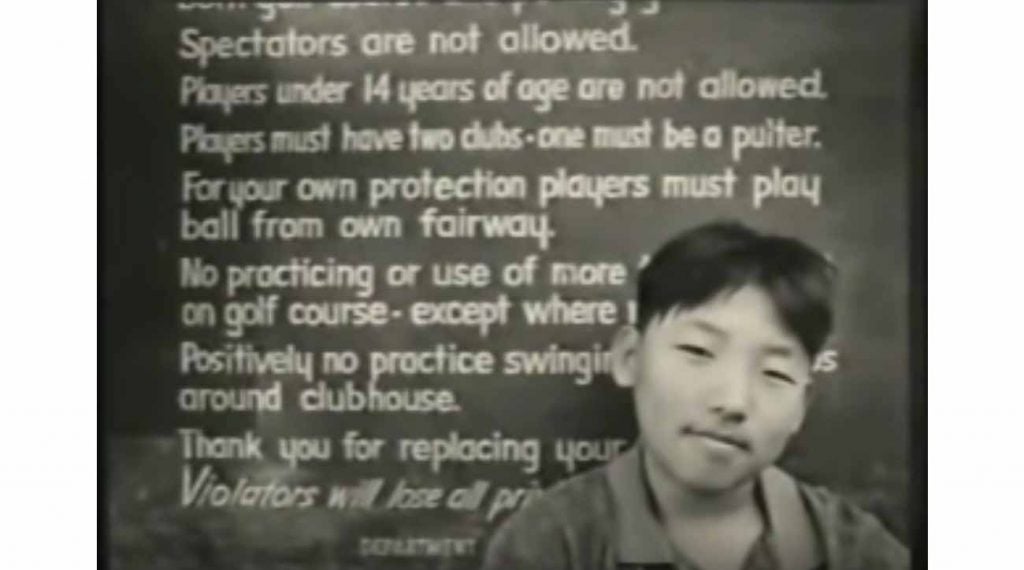 Among the ad's most powerful imagery is a kid sitting in front of golf's "rules."

Dethier: Brilliant start! With that in mind, what do you think IS Earl Woods’ vision for Tiger — and how does that vision differ from your run-of-the-mill avid sports parent?

Foehl: What’s striking about Earl is just how far his vision extends. Actually, I don’t think it’s possible to have a vision that extends further than your son changing the course of humanity. Smith’s piece sheds light on the measures Earl went to in his “preparation” of Tiger. This became part of the Earl Woods legend: He would train his son by making noises, dropping his golf bag or providing other distractions in his backswing (this became better-known in another Nike commercial that aired in 2008 — we’ll get to that).

That sort of thing makes sense for Tiger being tough on the golf course, sure. Good parenting.  But what we don’t hear as much about is the detailed eye with which he prepared Tiger for everything that would come off the course, which included becoming the most famous athlete in the world. That’s remarkable.

What may be the craziest part, given that Earl himself was a soldier and then a defense industry salesman, is that he actually seemed to know what he was doing! Bill Simmons writes about how it tracks that kids who grew up with professional athletes as parents are better prepared for that world because they’re used to being in the locker room, around the media, in constant travel mode, etc. That makes a lot of sense to me. But there is nothing in Earl’s background to suggest he has the expertise to raise Tiger in the way he has. And yet, there’s a remarkable passage in Smith’s piece in which Earl details all of the ways in which he was put on earth for the sole purpose of creating Tiger. The levels to all of this blow me away.

I think Tida actually sums up Earl’s understanding best in Smith’s piece: “Tiger has Thai, African, Chinese, American Indian and European blood,” she says. “He can hold everyone together. He is the Universal Child.” It follows, for Earl, that because everyone in the world sees a little bit of themselves in Tiger, he will unite all of humanity in a way no athlete, or human, ever has. Simple enough. 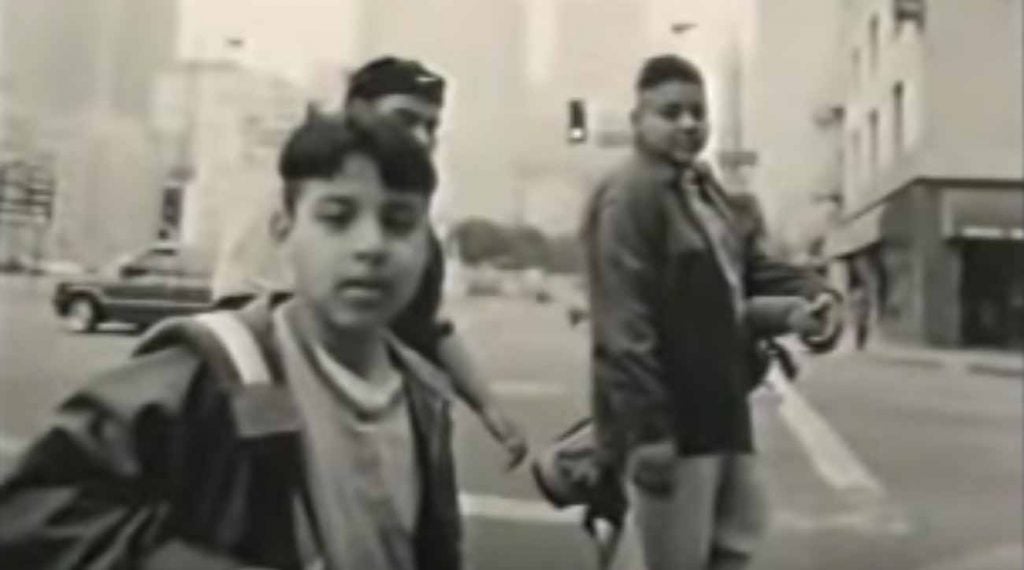 In the '90s, even the idea of kids of diverse backgrounds playing golf in a cityscape was somewhat subversive.

Dethier: Okay, with that as a base, let’s get to the commercial, then. That’s important to remember — it’s a commercial! But in many ways it seems consistent with the image of Tiger Woods that his parents have laid out for public consumption. What is Nike doing here?

Foehl: That’s what I find so interesting about the choice Nike is making here. A lot of readers are probably more familiar with their “Hello World” commercial that ran around the same time (I believe a little before this one). “Hello World” makes so much sense. It lays out Tiger’s accomplishments and then gives a nod to Tiger’s potential to effect cultural change by noting that he still can’t play at some of the most famous golf courses in America (this sparked some controversy). I’m no marketing expert, but that seems like a really compelling way to present him to the masses.

But “I Am Tiger Woods” feels like Nike really leaning into this other side of the story — the side essentially spoken into being by Earl. This is not a commercial promoting a new clubface technology, shoe, or line of apparel. What Nike is selling is a father’s vision that his son “will transcend this game and bring to the world a humanitarianism which has never been known before.”  You and I were both only six or seven when this was happening, so I’ve only ever taken this in as history. I wonder what the average golf fan thought of Earl in that moment. My impression is that Earl’s celebrity of sorts grew as he was proven right, which make those later Nike commercials powerful. That Nike was willing to go all-in on Tiger the Healer that early is surprising. 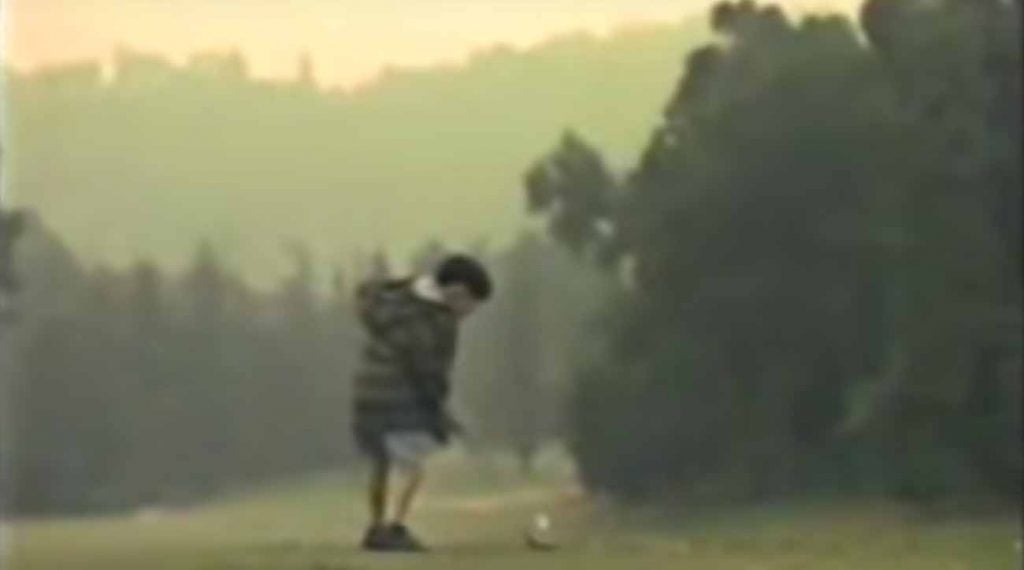 The inspiring piece of "I am Tiger Woods" is that everyone — even the kid in the hoodie on an empty golf hole — should be able to play.

Dethier: My sense from talking to colleagues is that Earl was a great quote and an entertaining extension of Tiger. But my sense is also that Tiger himself — never mind Earl — wasn’t taken as seriously as he should have been by the game’s insiders. I think Curtis Strange’s “you’ll learn” interview represented the skepticism of Tour vets. Earl was predicting that something was about to happen that had essentially never happened before, and he was predicting it WAY in advance. It’s hard to know whether to give him credit for being right or to give Tiger even more credit for overcoming the weight of Earl’s expectations.

Let me put the question to you, then: Is anybody in the wrong here? Earl? Nike? Tiger? Us viewers? Tiger’s doubters? Was this ad campaign a good thing, a bad thing, a neutral thing? How should WE feel about it all?

Foehl: Well, I do think we need to give Earl credit for raising the best golfer to ever play the game. Regarding Tiger vs Earl’s expectations, I think one of the best things Earl did for Tiger was get Tiger into lockstep with him. You see this in the Strange interview. I certainly don’t get the sense that Tiger is under the impression that his dad thinks he ought to win. Tiger himself knows that he’s going to win. Earl has somehow managed to move from expectation to prophecy. Nothing happened to knock Tiger out of the sense that what was happening is what was supposed to happen, so his confidence could just build and build.

Not to pander to GOLF Magazine fans here, but I’m reading Michael Bamberger’s Men In Green right now and he has a particularly relevant quote from Arnold Palmer (a man decidedly more qualified than I am on the subject).

Palmer says, “Tiger was so endeared to his father and what his father had him doing that it is almost difficult to explain. I watched him practice at Isleworth when he was in the midst of it. As long as he stuck to the routine that his father had laid out for him he was going to succeed. Had he continued to do that he probably could have established a record that would never have been broken.”

I do think that Earl went too far in predicting Tiger’s impact off the golf course. Sure, he became an international superstar, but I don’t think he had quite the impact as a global healer that Earl predicted. Nobody reasonably could. I doubt Nike regrets promoting that side of Earl’s vision, though, because Tiger’s identity truly was a powerful part of his story, especially in that moment.

I love Tiger as much as anyone who grew up watching him. I think he influenced us both tremendously as people who like golf and as athletes in general. I love this stuff. But it’s worth remembering that there are a lot of people who don’t feel the same way.  Those people probably would have a hard time sitting through this whole ad — they’d think it preposterous.

Still, I maintain that you certainly wouldn’t be doing your job (never mind this “project”) without him. I guess I mean that more from the standpoint of your interest in golf, but an argument could be made that your job wouldn’t exist without him, either. I’m not saying that the vision of “I am Tiger Woods” became a complete reality — but it’s hard to undersell the full range of his influence.