How the Phoenix-based, golf-loving Thunderbirds have raised nearly $150 million for worthy causes 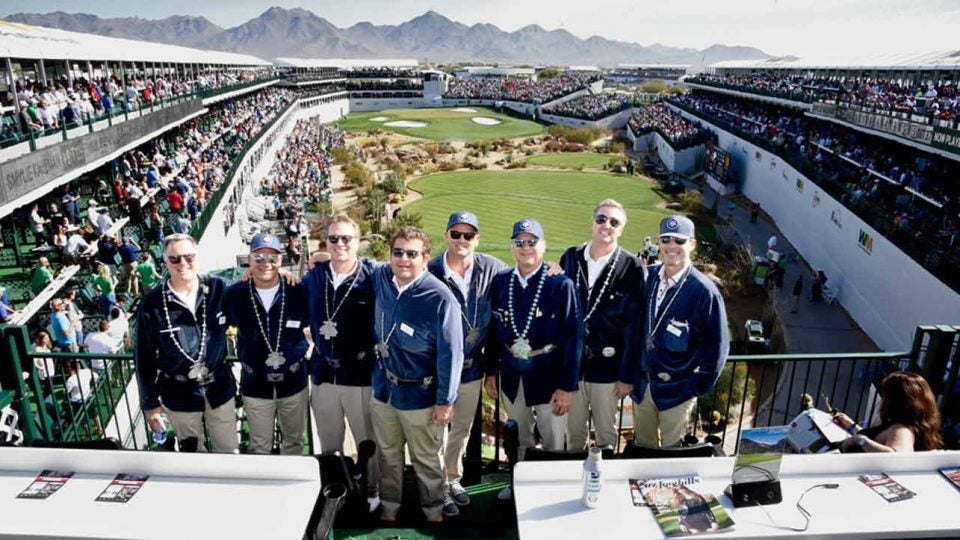 The 'birds flock to TPC Scottsdale's par-3 16th, where the crowd is, well, only occasionally charitable.
Courtesy

By almost any measure, Tim Woods is a tough guy — a Black­hawk helicopter pilot for the Army National Guard and a veteran of two tours of duty in Iraq. But he’s also a man unafraid to show emotion, inclined, he says, to “blubber like a baby” at acts of kindness and generosity.

One of many moments that reduced him to tears came on his recent visit to the Phoenix Rescue Mission, an organization in the Arizona capital that offers shelter and support to men, women and children struggling with homelessness and addiction. “I couldn’t help it,” Woods says. “I just kind of lost it.”

Nor could he stop from snuffling earlier this summer when he rose to give a speech at a breakfast benefit for the Special Olympics Arizona. And don’t even get him started on his tour of a Boys and Girls Club in south Phoenix that offers a safe haven for kids with few other spots to turn.

“To see the obstacles some people are up against, and the positive impact you can have on their lives,” Woods says. “That’s when it really hits you … ”

Bottom line: He goes through a lot of Kleenex. He also hands out a lot of checks, adding to a tally that has been mounting for decades. All the money goes toward uplifting causes, and every cent of it comes courtesy of The Thunderbirds, the juggernaut of a charitable out­fit that Woods has been part of since 2010.

Recognized around the Phoenix area as a brotherhood of softhearted movers and shakers, the all-volunteer Thunderbirds are known to golf fans across the country as the pooh­bahs behind the Waste Management Phoenix Open, the best-attended stop on the PGA Tour. Famed for its raucous atmosphere, the event is a week of orches­trated bedlam. But even in the madness, The Thunder­birds are impossible to miss. Dressed in their signature blue velvet tunics and silver concho belts, with their namesake Native American emblem — a thunderbird­ draped as a pendant around their necks — they fan out on the grounds, tending to a litany of logistics at a tourna­ment they spend the whole year planning.

It’s no small task, with no small impact. In 2019 alone, the event raised $13.2 million for local charities, pushing the tournament’s all-time fundraising total to $147 million.

“Over the years, they’ve turned their tournament into a premier golf event,” says Shannon Clancy, associate exec­utive director of St. Vincent de Paul, a nonprofit devoted to serving the poor that has received more than $1.2 mil­lion from The Thunderbirds. “But really what they’ve done is transform it into a tremendous force for good.” 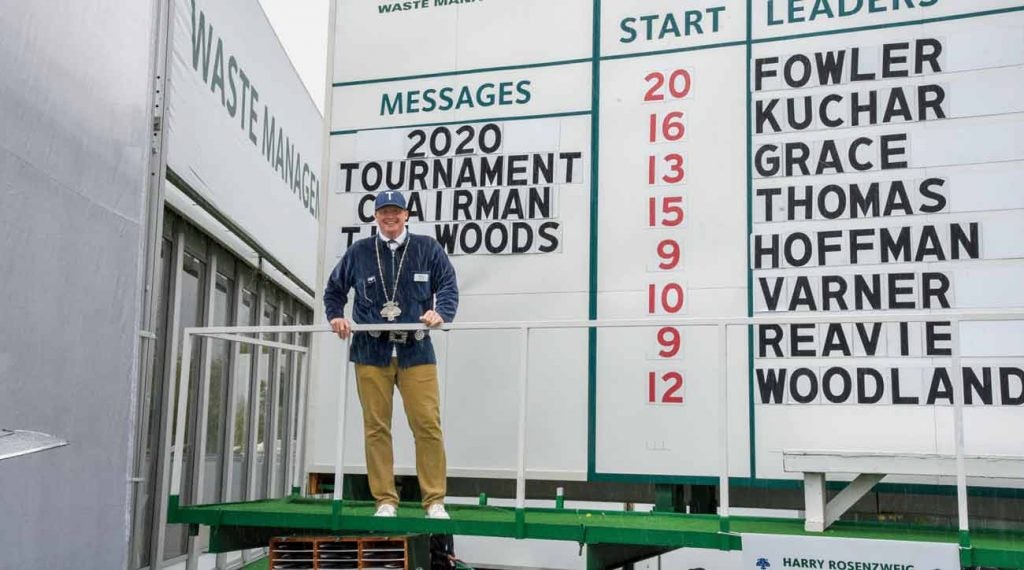 It’s a fitting evolution for two Arizona institutions whose histories are tightly intertwined. The Thunder­birds were born in 1937 as a five-man committee charged with promoting the Valley of the Sun through sports. As their efforts expanded, so did their ranks. Each origi­nal member selected 10 recruits to create a roster of 55, the same number of active Thunderbirds that holds today. Then, as now, inductees were the cream of the community-minded crop. They included Bob Goldwa­ter, an avid golfer and brother of five-term U.S. senator, Barry. Goldwater urged The Thunderbirds to host a golf tournament. The Phoenix Open, which had started in 1932, made a natural choice.

In its early decades, the venue toggled between the Phoenix Country Club and the Arizona Country Club, until 1987, when it moved to newly opened TPC Scotts­dale, a project The Thunderbirds helped pay to com­plete. Replete with spacious corridors and sculpted amphitheaters, the course gave the tournament room for growth, which The Thunderbirds cultivated with their commitment and clout. The group’s member­ship is a high-desert who’s who, comprising the likes of Phoenix Suns owner Jerry Colangelo and Arizona governor Doug Ducey. Jim Nantz and Jack Nicklaus are honorary Thun­derbirds, as were Bob Hope and Bing Crosby.

For all the prominent figures in their midst, The Thunderbirds main­tain a mostly understated profile. As with prestigious golf clubs, you don’t ask to join. You’re nominated, and your name is put to a closed-door vote. Most new Thunderbirds are chosen in their mid-to-late 30s. They remain active members until they turn 45, when they morph into life members, of which there are about 280. One measure of Thunderbird seniority and status is the number of silver and turquoise beads on their necklaces, each representing a charitable deed done. A Thunderbird whose necklace is bare is something like a young buck without antlers.

The group's membership is a who's who. Nicklaus is an honorary Thunderbird.

“You can always tell the newbies,” says Jerry Lewkowitz, 90, who became a Thunderbird in 1962 and remains a fixture at group meetings.

Once unadorned, Tim Woods’s necklace now hangs heavy with beads. His tournament responsibilities are weighty, too. He is the chairman of the 2020 Waste Management Phoenix Open (January 30 to February 2), a demanding role that grows near all-consuming as tournament week approaches, leaving Woods scant time for his paying gig in the insurance business. It’s okay, he says. Chopper pilots can handle pressure. So can most Thunderbirds, who self-select toward the Type A.

A defining trait of the organization is a culture of healthy competition. “There’s nothing I’d love more than to p–s off my tournament chair predecessor by raising more money than he did last year,” Woods says.

At this year’s event, expanded infrastructure, including new corporate boxes and blown-out concession areas, should help boost revenue. Every sponsorship deal sealed, every visor and vodka tonic sold, means more money toward worthy causes. Sometime after the final putt drops and the proceeds are tallied, The Thunderbirds will announce the sum and discuss the many lives that stand to benefit from it — the families without homes, the children needing health care, the services for seniors operating on a shoestring.

Tim Woods won’t be alone. There won’t be a dry eye in the house.