The eight most exciting ways today’s Masters could end, ranked!

The 81st Masters doesn’t lack storylines as we prepare for the final 18 holes. Can Jordan Spieth grab a second green jacket? Will Sergio or Rickie Fowler finally get their major title? Can someone go low and catch the final groups? Here are the eight most exciting ways this Masters could end.

8. Justin Rose wins his first green jacket and second major title. When Rose won the 2013 U.S. Open at Merion, it was the culmination of a career in the spotlight, beginning with his breakout T4 finish as a 17-year-old amateur at the 1998 British Open. Merion of course was no fluke — Rose has always had the look of a multi-major winner. With 17 titles between the European and PGA tours and two majors, he’d be a virtual lock for the Hall of Fame. His gold medal doesn’t hurt his chances, either.

7. Adam Scott rallies from three back to claim his second career Masters. Like Rose, Scott is too talented to finish his career with one major title. Like Fowler, he’d be a popular winner. With the weather bright and calm, a three-shot rally would also require a round in the mid-60s, and low rounds have a funny way of producing Augusta’s signature gallery roars.

6. Rickie Fowler wins the Masters for his first major title. Do orange and green go together? It might be the first time in history that color combo appears at Augusta, but a win for the popular 28-year-old would be a hit with his legion of fans and a boon for Cobra-Puma’s bold line of threads. 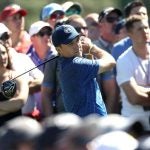 You may also like With stars aplenty, final day of 81st Masters is bound to be one for the ages

5. After starting the day five shots behind, Lee Westwood storms back to shock the world and win his first major. The 43-year-old has been star-crossed at majors his entire career, but his Masters track record is sterling (five top 10s since 2010). If it’s ever gonna happen for Lee, an improbable rally might be his best shot. This would be one for the books.

4. Sergio Garcia wins the Masters, scrubbing his name off the list of best players without a major. At 37, Garcia has already provided a career’s worth of indelible moments, from lashing a shot around the tree at Medinah in ’99 to Ryder Cup glory. A victory for the fiery Spaniard on the late Seve Ballesteros’s 60th birthday would be the perfect script for a (made-for-TV) movie. Sergio’s champion’s press conference would be epic.

3. Jordan Spieth rallies from a two-shot final-round deficit to win his second green jacket. In the process, Spieth would be the first to win a major while making a quadruple bogey since at least 1983, when hole-by-hole stats were first archived. Spieth would also cement his status as golf’s most resilient player and, at 23, one of the mentally toughest golfers of all time.

2. After starting the day six shots back, Rory McIlroy fires the third 63 in Masters history and wins the green jacket. On a day as calm as this one, McIlroy would need a historically low round to close a wide deficit and complete the career Grand Slam. Sounds like fun, don’t you think?

1. Fred. After starting the day seven shots back, 57-year-old Fred Couples fires the most spectacular final-round in major-championship history, a 10-under 62, to win the Masters by one and become the first fiftysomething major champion. OK, fine. It ain’t happening. But what a story…