Shane Bacon has become a familiar face for golf fans over the past few years. Last year, he took on play-by-play duties alongside Brad Faxon during Fox Sports’ broadcast of the U.S. Open. But this year, we may see him take on another role: U.S. Open competitor.

On Monday, Bacon became one of five players (plus two alternates) to qualify for the U.S. Open sectional via a local qualifier at Phoenix Country Club in Arizona — Bacon’s home club since November 2017. His round included an eagle, three birdies and two bogeys on the 6,764-yard par-71 layout. His final score of three-under-par 68 was good enough to claim the final sectional qualifying spot.

“I play less than I used to play, and I’m not what you consider a very smart golfer, for the most part,” Bacon said. “Normally I’m a complete moron. But I played really smart all day [on Monday]. I putted so dang good. I made a lot of really tough 10-footers.”

His triumphant announcement on social media was immediately flooded with well-wishes.

Battling through the @usopengolf qualifying grind is always fun. I’ve probably done local 8 or 9 times, sniffed the line a couple of times, fired awful numbers more. Today, at my home track, I played patient golf and made it to sectionals. It’s a small accomplishment in the landscape of golf, sure, but teeing it at 9:40 this morning and finding out at 2 pm you’re through is why we play, it’s why we care and it’s why we love the competition of the sport. Golf man … it can make you feel like a goof one day and a genius the next. To Dallas I go …

One of the accolades came from recent PGA Tour winner, Max Homa.

Letssssss gooooooooooooooooo!!!!!!!!!!!!!!! Gunna be the first ever player to announce his own round during the US Open.
“Hey Joe Buck, I have 202 hole, gunna hit a hold off 8 iron”
“Ok good luck Shane talk soon” https://t.co/yFrkEMTk8C

Bacon had originally tapped Homa to caddie for him (with a camera crew in tow), but Homa’s recent victory at Quail Hollow necessitated an unanticipated trip to New York for this week’s PGA Championship. Bacon ended up carrying his own bag.

Bacon is an accomplished player who currently maintains a +2.5 handicap (no, that’s not a typo — that’s better than scratch). He competed professionally on mini tours before starting his career as a golf journalist and broadcaster. Bacon’s amateur status is currently in the process of being reinstated (“a two-year process,” he says). So in the event he makes it through the sectional, he’ll compete as an amateur. 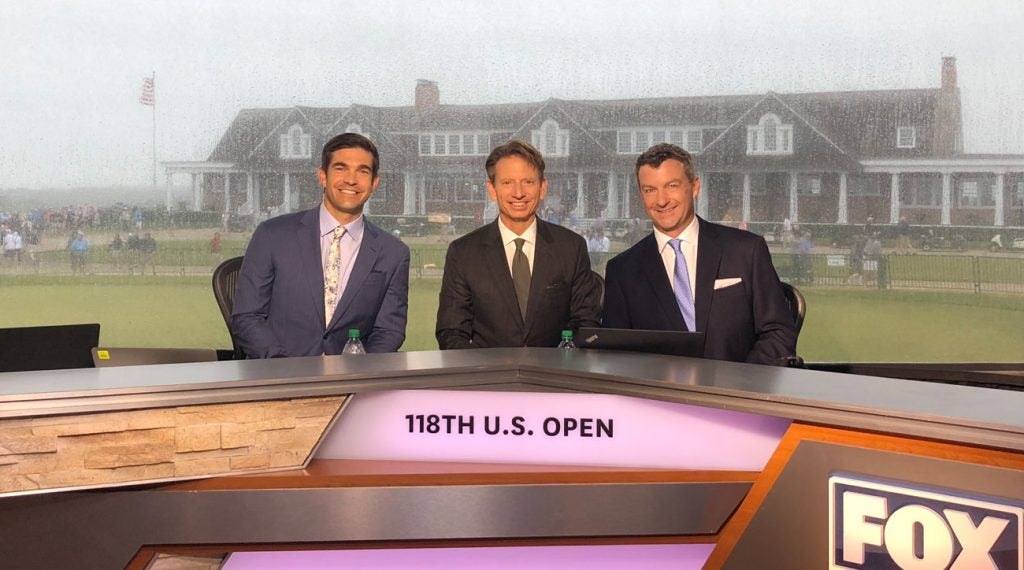 Shane Bacon (far left) poses in the booth at the 2018 U.S. Open at Shinnecock.
Courtesy of Shane Bacon

And speaking of the sectional, Bacon is scheduled to play in Dallas on May 20th in order to avoid a conflict with his on-camera duties for Fox. He’ll be in North Carolina covering the U.S. Senior Women’s Open on the weekend prior to the sectional, and will have to take a late-evening flight to DFW on Sunday for his Monday tee time. “I’m going out next Monday blind — no practice rounds,” Bacon laughs. “I hope they have yardage books!”

Adding further drama to Bacon’s quest to qualify is the expected arrival of his first child. Bacon’s wife, Cindy, is due in three weeks, but a late arrival could put him in Phil Mickelson-beeper territory. Not to mention the kinks it would create in Fox Sports’ broadcast plans. When I asked Bacon if he’d allowed his mind to wander to the possibility of making it through the sectional, he was blunt: “I think [Fox Sports executive producer Mark] Loomis would throw my clubs in the ocean.” 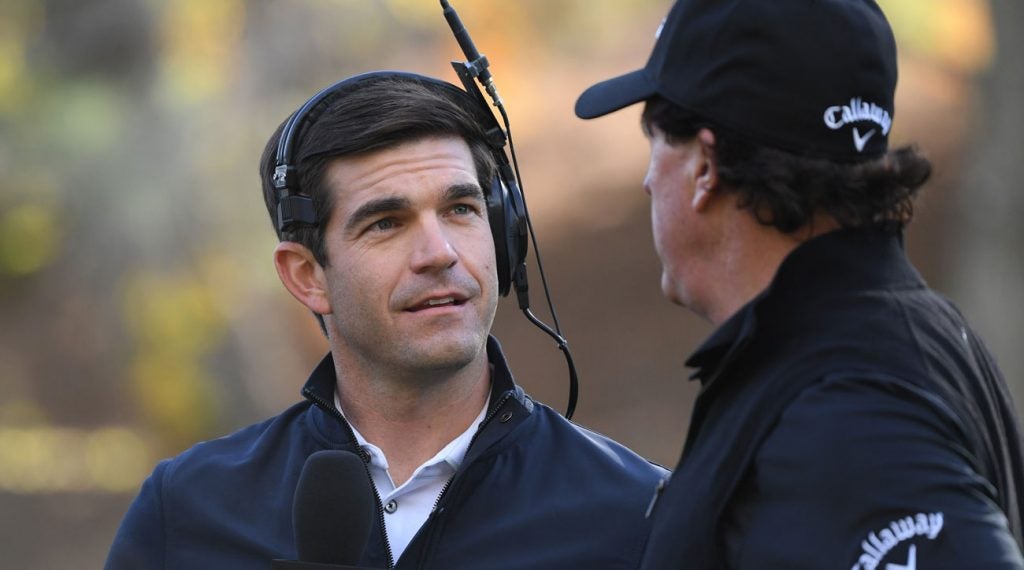 In all seriousness, Bacon’s accomplishment is truly remarkable, regardless of what happens at the sectional, and he’s content to enjoy the ride.

“It’s probably up there with the coolest things I’ve done in golf,” he said. “In some really small, electron-level of the U.S. Open, I feel like I’m kind of a part of it. Even if I don’t get through [the sectional], I was a blip on the screen of the 9,000 people trying to qualify. To join that very small number of people who got through the local will be something I remember for quite a while.”