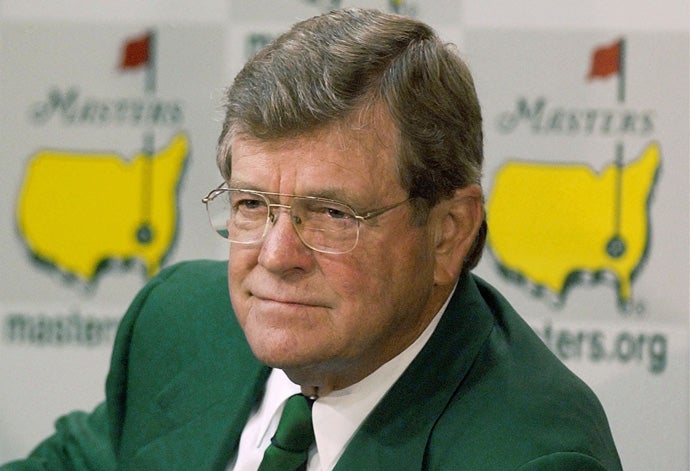 April 2002 "There may be a day when women are invited to join our membership, but that timetable will be ours, not at the point of a bayonet." -- Former Augusta National chairman Hootie Johnson
Elise Amendola/AP

The Bastille Day death of William W. “Hootie” Johnson, the former chairman of the Augusta National Golf Club, is a case study of life in these modern times. In the 86 years he spent on this earth, living chiefly in South Carolina and Georgia, he did any number of good, worthwhile and principled things. But within the broad community of golf, and even within the confines of the Augusta National Golf Club, he will be remembered for one choice phrase.

In June of 2002, a woman named Martha Burk, the head of the National Council of Women’s Organizations, wrote a private letter to Johnson, urging Johnson to admit women to the all-male club so that “this is not an issue when the tournament is staged next year.” Several weeks later, Johnson wrote back to her, saying that change would not come “at the point of a bayonet.” He released to the press—to the media—Burk’s letter to the club and his response. Whatever image you may have had of Augusta National being run by genial Southern gents—starting with Bob Jones—died that day in Johnson’s hyperbolic prose. He did not take the high road and he did not kill Ms. Burk with kindness. Hootie Johnson declared war. In doing so, he gave her a platform.

Because of Hootie Johnson’s nickname, his Southern accent, his blunt style, his athletic history as a fullback at the University of South Carolina in the segregated 1950s, his bayonet reference—and especially because of his unwillingness to accept women as members at Augusta National—many golf fans, casual and otherwise, assumed they had the man figured out. That’s human nature, but it’s also a shame, because Johnson was a person with many dimensions.

First and foremost, there was the constancy of his private life. He had one wife, Pierrine, whom he married in 1951, and they had four daughters and 10 grandchildren, upon whom he doted.

Then there was Johnson’s phenomenal success as a banker, a career that started with running a single bank owned by his father in Greenwood, S.C. It ended as the chairman of the executive committee of the Bank of America.

Johnson’s support of black political candidates and various black education causes earned him affection and respect among (predictably but not limited to) black politicians and educators and all manner of Southern progressives. Any person who wants to learn more about this subject should find Alan Shipnuck’s 2004 book, The Battle for Augusta National.

But in the end, despite all his away-from-Augusta good works, what Johnson will be best remembered for is his unseemly and unnecessary fight with Martha Burk. In an odd and uncomfortable state-of-the-Masters press conference in 2003, Johnson said, “If I drop dead right now, our position will not change on this issue. It’s not my issue alone. I promise you what I’m saying is, if I drop dead this second, our position will not change.” You could hear Christine Brennan of USA Today tapping out a column from 100 feet away.

Johnson saw the issue, among other things, as a right of free association. He was not aware of—or did not care about—the embarrassment the single-sex policy caused some members, particularly those who had prominent positions at publicly-traded companies. Johnson single-handedly picked his successor, Billy Payne, who became the chairman of the club after the 2006 Masters.

In 2012, Payne and the club took the unusual step of announcing two new members: Condoleezza Rice and the business executive Darla Moore. They were the first two female members of the club. Two years later, when IBM’s CEO, Virginia Rometty, joined the Augusta National, there was no accompanying announcement.

Johnson, a fit and robust man despite his long history of heart issues, had been in failing health in recent years. Payne issued a statement Friday afternoon about “our beloved chairman emeritus.” Payne said that during Johnson’s eight-year term that “we always admired his genuine and unrelenting respect for the traditions and vision of the club and tournament established by our founders Bobby Jones and Clifford Roberts.” In 2003, at Johnson’s direction, CBS broadcast the Masters without any advertising, so that the tournament’s sponsors, Coca-Cola, IBM and Citigroup (in Johnson’s reasoning) could not be targeted by supporters of Burk’s women-at-Augusta cause.

By and large, the players who competed in the Masters and the PGA Tour found it convenient to ignore Johnson’s stance about women at Augusta, although many players were quick to praise the club when it did finally admit women.

To the players, Tiger Woods chief among them, the most impactful thing Johnson did was to make substantial changes to the course over his tenure. He grew a so-called first cut, a light layer of rough, so that players could not spin shots into Augusta’s difficult greens after errant shots. But the first-cut also meant fewer exciting recovery shots played from the under the course’s pine trees.

Scores of strategically placed trees were planted under Johnson’s watch, most notably on the right side of No. 13. But to Woods, in a moment of humor that did not mask his frustration, once said it was more like “thousands” of trees. Johnson also added over 500 yards of length to the course. In the wake of the Johnson tenure, the course played much more like a traditional point-to-point tree-lined U.S. Open course than it did the free-wheeling course where Arnold Palmer, Jack Nicklaus and Tom Watson made their marks, a course where weekend eagle roars were siren calls to the game.

All that is part of Johnson’s golf legacy, too. The only thing he did at Augusta that was more significant than changing the course was selecting Payne, an agent of change at the club if ever there was one, as his successor.

In his statement, Payne said, “At all times, Hootie selflessly served as my personal mentor on matters here at Augusta National and the Masters, as well as in business and life. He impressed upon me his obsession for constant improvement and a love for Augusta National that will forever remain unmatched.”