Here’s the *real* goal of the new distance report, according to Nick Price 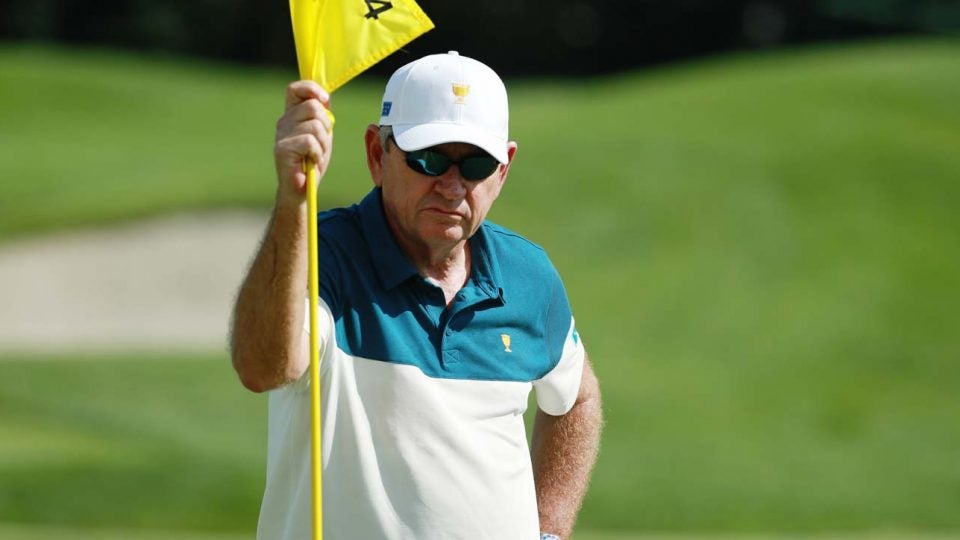 Nick Price captained the International team for the third time at the 2017 Presidents Cup.
Getty Images

Nick Price is the best golfer of the 15 members of the USGA executive committee. By a lot. He is newly 63 (a score he once shot in a Masters) and he’s been chipping away at the game for a half-century now, as a player and as a thinker. The 13-page summary of the USGA’s long-awaited Distance Insights Project? Child’s play, for Price. He’s been through the actual report, 90-plus pages, highlighter in hand, again and again. A good read, he says.

“You really should read it,” Price said the other day.

Price’s you is you. It’s you, me, my bosses, Tour players, resort operators. It’s ball manufacturers and club manufacturers. (In analyzing distance gains, this distance report does not discriminate between the two.) It’s caddies, course architects, superintendents. Price’s you is anybody and everybody who cares about golf, whether it’s your livelihood or your hobby or some combination thereof.

But Price is concerned that the golf community is not going to understand the real purpose of this summary release from the Distance Insights Project report, let alone the full one or whatever follows it. He knows the work that went into it, and he knows we could misread it and misunderstand it without even reading it.

He has seen, as we all have seen, similar things happen in golf, in other sports, in politics, in health crises. Somebody with a megaphone (or a big Twitter audience) and an extreme, simplistic position hijacks the debate, to the detriment of all.

Whatever worries Price should worry us. If the subject is golf, he’s often the smartest person in the room, or right up there with Lee Trevino and Johann Rupert, a South African businessman. When the term Tiger-proofing became a thing in 1997, Price said, “If you want to Tiger-proof a course, make it shorter, not longer.” Golf did not listen.

The mid-1990s was the start of the modern technological renovation. (Big titanium heads in drivers, super-light shafts, hard balls used even by the best players.) Reminded of his Tiger-proofing insight the other day, Price said, “I would add to that, pay more attention to the shape of holes, how they bend, where the trees are, where the water is.”

(A disclosure: I met Nick Price in 1983, and some years later he wrote a foreword to a book I had written; he was also a paid endorser for a golf club I invented.)

Silent Spring was a landmark 1962 book by Rachel Carson that many consider to be a catalyst for the modern populist environmental movement. We Norm Archers (“I’m mad as hell and I’m not going to take it anymore”) want a Silent Spring for golf. The USGA’s DIPR is not Carson’s Silent Spring. It’s not a decree and it’s not meant to be. It is, yes, part of process.

“It’s a first step in an education process,” Price said recently, during a long lunch that at a South Florida club he founded with others, McArthur Golf Club. “It’s an attempt to get everybody, no matter how you come to the game, to understand where we are and where we’re going, what might happen if we do nothing and what we could do. But the first step is to get everybody on the same page.”

Price, a Hall of Fame golfer with three major titles, is the best sort of company man the USGA could have. He of course has his own opinions. He’s not sharing them. He knows it’s critical for the USGA, working in conjunction with the R&A, to speak as one voice. “People really don’t understand that the USGA has only the best interests of the game at heart,” he said.

He was eating a tuna melt, or trying to. Price is passionate about his USGA work and his various comments and insights came in long, fluent bursts, as the tuna melt sat. Now and again, as he looked to be on the verge of a bite, a friend or an acquaintance stopped by to say hello. Price lives a few miles from the course, on Jupiter Island, in the vicinity of Greg Norman and Tiger Woods. Norman is trying to sell his estate. Phil Mickelson is looking to build a house on Jupiter Island. Woods, like Price’s tuna melt, isn’t going anywhere.

“I was once one of the players in U.S. Opens, grumbling about how the USGA sets up their courses and what they do with all the money they make,” Price said. He had a handful of good U.S. Opens, but he was never, surprisingly, right there at the end.

“But then when you get into it and start to really understand what the USGA does, you learn that the U.S. Open is the only USGA event that makes any real money, and that all that money is going back into the game.”

Price doesn’t say this next part quite so pointedly but he knows what all clear-minded people in the game know: touring pros of every stripe, manufacturers, Tour executives with incentive clauses, course owners, network executives and various others from various other constituencies have an almost innate desire to make more money every year. It’s human nature. The USGA wants to make more money, too, but only so it can put more money back in the game with the goal of improving the game. Those last three words are make-or-break.

“If the USGA did this long, thorough study of the role of distance in the game, and the first statement out it was, `We have to roll back the ball by 10 percent,’ we’d lose people even before we got started,” Price said.

The distance summary does discuss the prospect of the use of a local rule that “that would specify use of clubs and/or balls intended to result in shorter hitting distances.” Do not say you’ve heard about tournaments like this already called the World Hickory Championship! Keep an open mind, people. That’s Nick Price’s suggestion, for all of us.

Future USGA presidents will come out of the current executive committee on which Price now serves. I asked Price if he could ever imagine becoming the USGA president.

He wasn’t being modest. “I know how the game is played, but I don’t know about marketing it and TV contracts and HR and all the other things you need to know.” His regard for the outgoing USGA president, a Harvard-educated lawyer named Mark Newell, is high. “Incredibly bright, dedicated man, who spent countless hours on this report,” Price said. Despite his many years in South Florida, he still has the clipped accent of his childhood in Rhodesia (now the Republic of Zimbabwe).

Price has learned what it means to be part of an organization. “To be a professional golfer is so individualistic,” he said. “But a committee like this has to speak as one.” Price explained that even if I didn’t agree with every last thing in it, it wouldn’t be appropriate — or helpful — for him to part ways with the report’s message.

Price has been on the executive committee for two years and has now signed on for a third. It’s time-consuming and he’s honored to be doing it. “Look what this game has given me,” Price said. “If I feel like I could make one contribution through this committee that would make the game better it would be completely worthwhile.”

Drivers
How do new drivers get approved? Inside the USGA’s testing process

Somewhere in all this, he did manage to eat his tuna melt. Along the way, he offered this insight:

“When courses need more and more land, they are built farther and farther from towns and cities, and the access to these courses by public transit becomes harder and harder, and you get more of a country-club game, and a less diverse game. Is that good for golf? I don’t think so.”

Ignore this guy at your own peril.

Nick Price wants you to read the report for yourself.