Plan accordingly: These are the 4 best groupings at Augusta for Thursday and Friday

Let’s call a spade a spade: The groupings for the first two days of the Masters aren’t all that great. Augusta likes to spread the love and keep one trio from stealing the thunder, and this year, there are only a handful of intriguing players teeing it up in the same group. In a perfect world, we’d have Jordan Spieth out there alongside Rory McIlroy and Phil Mickelson. Or even an “Oh, they won a Masters” trio featuring Mike Weir, Trevor Immelman and Charl Schwartzel. That said, here are the four best groups to keep an eye on. 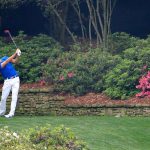 You may also like Masters 2017 tee times, groupings for Thursday, Friday rounds
​

The last group off on Thursday is the best. It’s the only pairing to feature three major champions and two of the most awe-inducing players in modern golf. (With apologies to Jimmy Walker, it’s the other two.) If you’re on site, be sure to plant yourself in a good spot on the 10th tee when this group rolls through. To watch Bubba hammer a cut down this dogleg is the stuff of legends. DJ is at the peak of his powers, but Bubba is one of the few players in the field who won’t be 10-20 yards behind him off every tee. The stripe show is must-see TV.

Hideto Tanihara was front and center on Sunday at the WGC-Match Play, but you’re tuning in here for Rory and Rahm. Both players’ names have been repeated over, and over, and over, in the leadup to the Masters. Can Rory complete the career grand slam? (It’s going to be wet, have you heard?) Can Rahm be the first rookie to win at Augusta? (Fuzzy Zoeller last did it in 1979, you know?) Storylines and cliches aside, these two guys mash. This group could easily produce the most birdies and roars.

These three have what it takes to win a major, but each has suffered Sunday heartbreak. Sergio and Westwood have been in the spotlight since the ’90s, so there’s a certain comfort in watching them play. Plus, Sergio enters the week absolutely mashing the ball in 2017 and is happy and healthy. Can he finally break through?

This one is entertaining, not because of the star power necessarily, but the disparate personalities in this grouping. Bernhard Langer has never smiled on a golf course and does not plan to start this week. Patrick Reed isn’t as theatrical outside of Ryder Cups, but he still puts on a show whenever he steps on the course. Especially given the whole “I went to Augusta State” storyline. Alex Noren is the 10th player in the world, topping Reed by three spots. And he’s not even the main attraction.