PGA Championship 2019: How Brooks Koepka became the stoic world-beater he is today

FARMINGDALE, N.Y. — If you listened to Brooks Koepka talking to the media Saturday evening after his third-round 70 in the 101st PGA Championship left him with the same seven-shot cushion he enjoyed 24 hours earlier, you’d swear the guy was born with the mindfulness of a Buddhist monk. This wasn’t a press conference; it was a self-help seminar.

When Koepka was asked if his mental strength comes naturally to him, he said, “It’s simpler than what guys think. Guys make the mistake of trying to figure out, when they get to a major, what’s going on, what’s different.” Nothing is different, Koepka said. “It’s just focus. It’s grind it out, suck it up, and move on. You’re going to make a lot of mistakes; it’s a major championship. You know that’s going to happen, and guys have a hard time letting that go.”

What Koepka didn’t say is that he himself was once one of those guys. When he arrived at Florida State his freshman year, he was an ascendant, uber-confident talent but not even close to the psychologically bulletproof terminator we know him as today.

When things didn’t go his way that first year — a missed fairway here, a double-bogey there — young Brooks fumed and scowled, muttered under his breath, tossed clubs. During one event on Florida State’s home course, Koepka smashed a perfect drive only to dump his approach into a bunker. When he found his ball plugged, he hurriedly chopped it out of the sand and missed the ensuing putt.

If you looked closely, you could see his skin turning green and his clothes bursting at the seams. On the next hole, his coach, Trey Jones, walked lockstep with Koepka down the fairway, expressing in no uncertain terms what Koepka needed to do: get over it already.

“His expectations were so high that he’d get really frustrated with himself,” Jones said in a phone interview Saturday afternoon as Koepka was bashing his way around the front nine of Bethpage Black, cruising toward an astonishing fourth major title in eight tries. “One of the things about ultra-talented players is that when it goes go bad, they freak out. Whatever their strength is, if they don’t have that strength, they really get aggravated.” 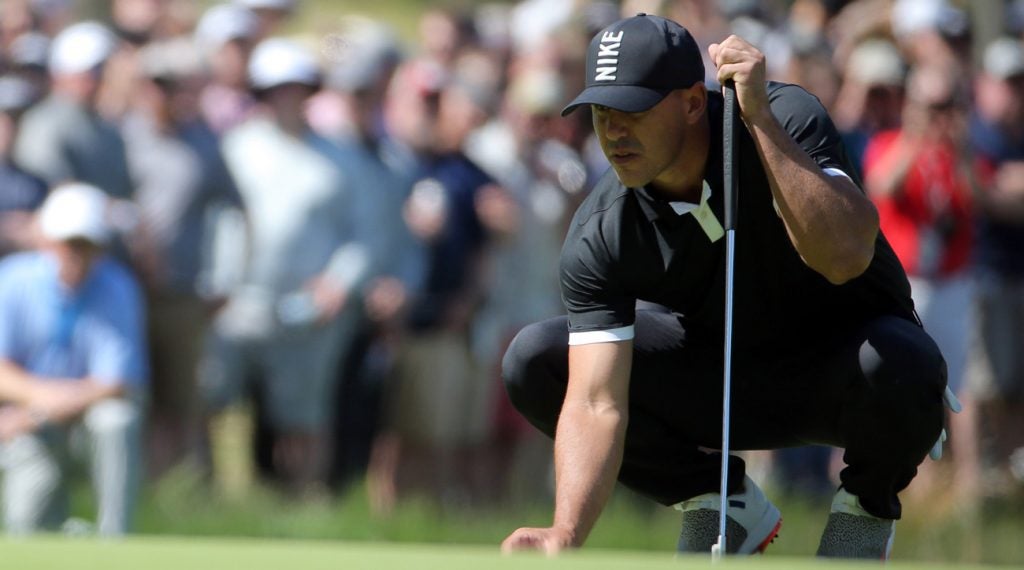 Here’s the thing: Koepka loved those pep talks. If he was a football player, he would have thrived under Nick Saban. If he had played hoops, he would have reveled answering to Bobby Knight. “You can yell at him, you can jump on him, and he’ll thank you for it,” Jones said. “He’ll say, ‘Man, I really needed that. I was acting like a little baby, wasn’t I?’”

Koepka soon realized that his temper was not only hurting him but it was also giving his opponents an edge. On Saturday evening at Bethpage, he told reporters, “I don’t need a sports psychologist. I’m pretty good at it. I know what I’m doing.” But that wasn’t always the case. In college, he worked with a sports shrink on a quest to find his inner-Dufner. In time, Koepka matured, mellowed, and grew up.

Eventually, wins followed. After going three years without an individual title, Koepka triumphed three times in his senior year. After graduating, he traveled the world, picking up four titles on the European Tour’s developmental circuit, from Italy, to Scotland, to the Canary Islands, followed in 2017 by his breakout major win at the U.S. Open at Erin Hills. You know what he’s done since then.

Matt Savage, a former Seminole golfer and assistant coach under Jones, was a senior when Koepka was a freshman. Savage saw that Koepka could run hot but lots of young studs do. “The thing about Brooks that separated him from even a lot of really good players was that his bad was so much better than most peoples’ good,” Savage said by phone from his home in Kentucky. “You’d watch him play and it was like, ‘There’s no way this guy can shoot over par.’ He would go an entire tournament on a really hard golf course and hit every single green for 54 holes. You just don’t do that.”

Koepka might be able to recount some of those holes, but there’s no chance he could tell you how his opponents fared. Says Savage: “We’d talk about rounds and he’d say, ‘I can’t remember one shot anyone in my group hit,’ and we’d be like, ‘What are you talking about?’ He hasn’t changed a bit from that standpoint, and it’s obviously a good trait to have.” To that point, Koepka was asked Saturday what he learned from observing Jordan Spieth’s five-win-two-major blitz in 2015. “I don’t really pay attention,” he said. “I’m just trying to do me.” 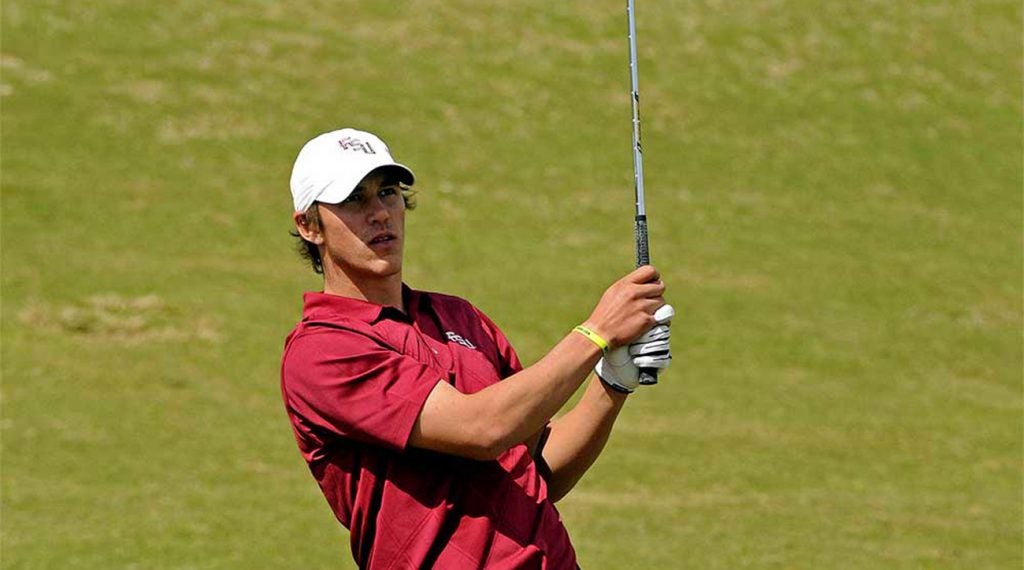 Koepka teeing it up for the 'Noles in college.
Getty Images

There are at least a couple of other narratives that follow Koepka. One is that he doesn’t really like golf, or at least that it’s not exactly a thrill-a-minute for him. Earlier this week, on the Pardon My Take podcast, Koepka fueled the fire when he said that the game “gets boring from, like, hole 5 to 12. You are just like, ‘Where am I right now?’”

It’s hard to wrap your head around. How could mashing 330-yard drives and knocking down flags possibly be boring? Savage thinks the truth lies somewhere in between. “It’s hard for me to believe that someone doesn’t really love something to be as good at golf as he is,” he said. “But I think he’s like that with anything he does in life. The Brooks you’re getting on the golf course is the Brooks you’ll get off the golf course. That’s his personality — nothing means the world to him.” In college, Savage said, Koepka’s teammates would razz him for his chronic apathy: “We’d all say stuff to try and get a rise out of him, like, ‘C’mon, Brooks, you’ve got to like something.’”

Needless to say, Koepka is not a golf nerd. He doesn’t watch much golf on TV, and it’s a safe bet he doesn’t have any Bernard Darwin first-editions in his home library. “When he says he gets bored with golf, he means just likes to play,” Jones said. “He’s not really a watcher of anything.

“I can assure you he’s not bored this week. It just takes a little bit more to get him going. He does work at it, though. When’s he’s on, he on. When he’s switched on, it’s everything— he’s compulsive about it.”

Koepka said as much after his third round on the grueling Black Course. He thrives on tough setups because they force him to do his homework, to come prepared, to put on his blinders and grind like hell. “I’m not the best at the birdie-fest,” he said. “I’m better if it’s going to play very difficult. Those are my kind of golf courses, where it’s very stressful to play. I enjoy that. That’s what I live for.”What he lives for. OK, now we’re getting somewhere.

Another popular Koepka story line is that the media hasn’t given him his due, which, when you put it that way, sounds like an oxymoron. Earlier this week at Bethpage, during the carwash of pre-tournament press conferences, Tiger Woods’ session directly preceded Koepka’s. Woods naturally drew a full house. When his interview concluded and Koepka took the podium, dozens of writers filed out of the room and back to their laptops. Don’t think Koepka didn’t notice.

Here, Koepka’s old coach and teammate are slightly less empathetic. After his win at Erin Hills, Koepka called Jones in the middle of the night to discuss the New York City media tour Koepka had been invited to attend. “Coach, you know that’s not me,” Koepka said, and indeed the new champ decided to take a pass. Said Savage: “I thought that was a little weird. You’re kind of making yourself not the center of attention, so how can you complain about not getting attention?”

Added Jones: “He wouldn’t do the tour, so a little bit is on him. If people got to know like we know him, the perception would be completely different. But the fact that he doesn’t seek it out, he’s going to get left out because the story’s just not there.”

Increasingly, though, the story is there, and not just because of the wonders Koepka has been conjuring between the ropes. In recent months he has loosened up in interviews, exhibiting a startling candor. He has zinged Bryson DeChambeau for slow play, roasted Sergio Garcia for acting childish, bro’ed it up with the Barstool boys, and even donned a thong in a cheeky photo that landed on his girlfriend’s Instagram feed. It’s a side of Brooks we haven’t seen, and Jones says there’s plenty more to learn.

When Florida State launched a series of golf camps several years ago, Jones’ star player wanted to help out. The coach was hesitant, given Koepka isn’t exactly the warm and fuzzy type, but he brought Koepka aboard anyway. “I was thinking this could be a disaster,” Jones said. It wasn’t. “The kids just loved him — he’s so good with them. He got Counselor of the Week every year.”

Koepka’s reluctance to self-promote might hurt him in the media, but Jones said it’s also one of his most endearing qualities. “When he helps out our golf programs financially or whatever it is he wants to do, he’s not going to be the guy standing there with a six-foot check in front of the camera,” Jones said.

As Koepka continues to torch his competitors and vacuum up majors, one of the next questions that will need to be answered is, how long can he sustain this? Not so much from a physical standpoint, but from a mental one. Can Koepka stay engaged?

Jones believe he can and will, pointing to Jack Nicklaus as an example of a player who over a decades-long year career stayed mentally sharp and motivated by finding the right work-life balance of golf, family and non-golf interests, from fishing to tennis to charity to making ice-cream. Koepka isn’t Nicklaus, of course, but he’s wired a lot more like Big Jack than he is say, Arnold Palmer, who couldn’t let a day pass without putting a peg in the ground.