The second major of the season is set to get underway as the PGA Championship heads to Bethpage State Park on Long Island for the first time ever. The tournament will be played on the treacherous Black Course, a public course that has not played host to a PGA Tour event since the 2016 Barclays and to a major tournament since the 2009 U.S. Open.

In fact, the course has only hosted four professional tournaments. Therefore, there’s an air of obscurity that surrounds this hallowed track. So, we called up the man on the ground at Bethpage who knows the course better than just about anyone: Director of Agronomy Andy Wilson.

Wilson, who serves as the superintendent of the course, talked to us about what holes will play as the most difficult, the key to playing well at Bethpage, the changes made to the Black Course ahead of the PGA Championship, and much more. 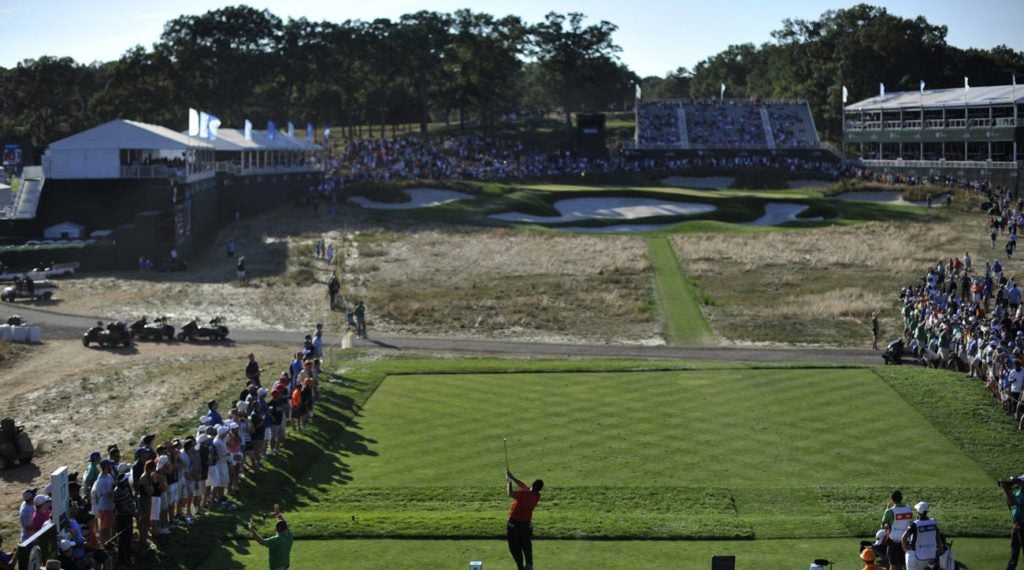 Bethpage will host the PGA Championship for the first time this month.
USA Today Sports

What holes do you think will play as the most difficult on the course?

Nos. 10, 11, 12; that’s a pretty tough way to start your day. That’s three tough par-4s, two of which are 500-plus yards. And then 15 and 16 is another titan and a tough two-hole stretch. 17 is no picnic for a par-3. On the front nine, 5 and 9 play difficult. 9 might not seem like a tough hole, but for the Barclays, 9 was a fairly difficult hole. Usually, especially for Thursday and Friday, you see some players in the red. It’s because they’re starting on the front. Scores start to come down as you head to the back. So players who start from the back tees are at a disadvantage.

On what holes will players will find some relief?

No. 13 is a par-5 on the back nine and 14 is the shortest par-3 on the course, so I think those are the holes on the back where guys would look to make up some ground. The 7th hole will play as a par-4 again like it did for the U.S. Open. It played as a par-5 at the Barclays so back to a par-70. I think the players like the course. It’s a difficult, but fair test. No. 3 is a tough par-3. It’s a great hole. So the first two holes are probably the pretty holes, maybe the not the most difficult holes. I think No. 3 is where the course starts showing its teeth.

Do you think that driving distance is the key to playing well at Bethpage?

Accuracy is going to be just as important as driving distance. I would say that someone who is in the top 10 in accuracy would probably be in much better shape than someone in the top 10 in distance if they’re just spraying it all over the place. The rough can be difficult. The fairways are narrow. They’ve been described as bacon-strip fairways. You have to hit them. I’m not sure if we’re gonna have U.S. Open rough, but it’s not gonna be easy.

How different will the course play given that the event will be held in May now rather than August?

I remember in the Barclays it just seemed like it was still and there was no wind. It was fairly humid, the air was sticky. This time of year, we have a little more wind. That can be a factor. If we get 10-15 mph winds, those could be the margins that make it much more difficult and give the players a little more trouble. That could also mean if there’s downwind on holes, they can really get after it. I think the wind could be more of a variable in the spring than it is in August.

The average temperatures for that week are a high of 68 and the low of 53. That’s pretty nice weather. Golfers will be much happier to play in that than when we get to August when it could be 88 degrees and sweltering humidity. I think most players would prefer to play in the spring than in August. Most courses in the Northeast have full season grasses like Poa Annua, Ryegrass and Bent grass. Those temperatures are right in the wheelhouse for those grasses. So it’s a little better time for us, especially as a public course. In August, it would probably be a little more tired and had a little bit more traffic on it. We’re happier that it’s in May as well.

Do you think scores will reflect more of what we saw when the course hosted the Barclays or U.S. Open?

It’s pretty tough to predict. I remember in 2002 there were all sorts of stories of players who were having difficulty even reaching some of the fairways. The uphill 15th par-4 was a beast. And then for the Barclays a couple years ago, the players were having no trouble reaching these holes. And they’re hitting them with 7 and 8 irons instead of 3 or 4 irons. And so for the Barclays the winning score was 9-under, 10-under. So you factor in the 7th hole is going to be a par-4 instead of a par-5, I would say about the high single digits is where the leaderboard will hover around.

Do you think the course will play more like it did during the Barclays or U.S. Open?

I would say it would lean more towards the U.S. Open. Slightly more aggressive with green speeds due to the weather being a little more favorable to the greens. The rough won’t be U.S. Open rough by that time, especially the high rough. If the players spray it into the rough, it’s gonna be no picnic. But it’s not gonna be like what it was during the U.S. Open.

What are some of the renovations that have been done to the course ahead of the PGA Championship?

The players will probably notice is that on No. 11 we added a green extension last spring. So No. 11 has about 500-600 more square feet and a back-left pin placement. So now we have multiple pin positions on the 11th green. We can get a little more aggressive with the pin placements, so that will be cool. On the 12th hole, we added a new tee which will play about 15 yards longer. It was about 501 yards and now will be 515 yards.

The other eye-catching one would be the 18th hole. We added two more fairway bunkers on the right side. The fairway had a little bit of an hourglass shape, so the front of the fairway ballooned about 30 yards wide. So if someone really wanted to lay up, there wasn’t much danger there. Now if a player wants to lay up, there’s going to be a little more pressure on him to be accurate. If a player wants to go for it, there’s more reason to go for it now that the fairway is wider further down.