The 41-year-old American bettered his 66-65 start to the week with a 64 on Saturday, extending his lead at the CIMB Classic in Kuala Lumpur to four shots.

Perez, a two-time winner on Tour, finished with a flurry of birdies, making four in his last five holes. In all, he made nine in the round against just one bogey. 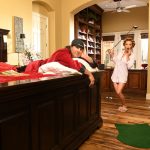 “I didn’t really hit it that great but I putted well again,” Perez said afterwards. “You know, I’m just kind of getting the most out of my game right now. It’s the same greens I won on in Mexico, so I really can see the line and I can see the ball in the wind here.

Xander Schauffele retained his second-place position after a second consecutive round of 67, and South Korea’s Sung Kang sits third after a 65. Hideki Matsuyama’s nine-under-par 63 was the lowest score of the day and took the Japanese star into a tie for fourth place alongside Keegan Bradley.

Defending champion Justin Thomas eagled the par-4 16th en route to a three-under 69. But the reigning FedEx Cup champion is far from contention, sitting 15 shots back of the lead at six under.

South Korean Whee Kim had the best shot of the day; the 25-year-old made a hole-in-one at the 207-yard 15th, earning him a brand new BMW 740Le xDrive Hybrid car.

Complete scores can be found HERE.