The split of superstar pairing Patrick Reed and Jordan Spieth has made waves and inspired second-guessing in the wake of the U.S. team’s Ryder Cup drubbing over the weekend. Reed called attention to his partnership with Spieth again on Tuesday, comparing their success to that of European stars Tommy Fleetwood and Francesco Molinari.

On Saturday, Reed’s wife Justine sent a number of tweets criticizing the split and told those curious to “ask Jordan.” Reed himself spoke out in a New York Times article later that night. “The issue’s obviously with Jordan not wanting to play with me,” he said. He went on to lament the pair’s split, given their success. “I don’t care if I like the person I’m paired with or if the person likes me as long as it works and it sets up the team for success,” he said. 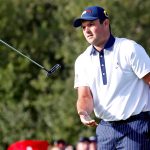 You may also like Patrick Reed had ‘no say’ in picking Ryder Cup pairings, Tiger was ‘second choice’

Reed joined Fred Couples on PGA Tour Radio on Tuesday. While Couples didn’t press him on any of his controversial post-round comments, he did ask Reed what it was like facing the red-hot team of Molinari and Fleetwood. The European duo took down Reed and partner Tiger Woods twice. Reed was effusive in his praise for the pair, and also compared their success to his own success with Spieth.

“They showed some amazing golf and they did it in such a great way,” he said. “I mean, it reminded me of whenever we were going out there in my first Ryder Cup and Jordan and I went and ham-and-egged it. It was unbelievable kind of seeing how they just made putt after putt and that went for the whole team.”

Reed covered a variety of Ryder Cup-related topics in the chat with Couples. He discussed how he had never played the course until this week, but liked the challenging layout. “I’ve never seen rough so thick, so long and yet so uniform. The ball is going to sit in the bottom and you’re going to hack on it,” he said. He added that morale was plenty high in the team room after Friday’s action. “There’s up and there’s downs and kind of flows that happen during the Ryder Cup,” he said. 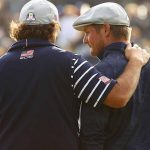 You may also like 5 radical ideas to fix the broken U.S. Ryder Cup system

But his highest praise was reserved for the star European duo. “They seemed to hit every fairway, every green and they never missed a putt,” he said.

Reed will now have three weeks off (“I don’t know what I’m going to do with myself,” he said) before returning to action at the World Golf Championship event in China.

Today on The Fred Couples Show, @PReedGolf broke down what happened to the U.S. team during this year's #RyderCup. pic.twitter.com/ezKguxE4a9