In his first return to Mexico since his win at last fall’s Mayakoba Golf Classic (and the caddie-tipping saga that ensued), Matt Kuchar was grateful to receive a warm welcome Thursday morning during the opening round, when he opened with a five-under 66.

“It was nice. The fans were great. I had so many fans come up and say glad to see me and really good luck this week, and they were cheering for me, hoping that I could win again in Mexico. So, it was a great feeling to have so many people pulling for me out here,” Kuchar said afterwards. 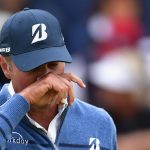 The reception he described contrasted with accounts from last week at the Genesis Open, where Kuchar faced a mix of cheers and jeers from the crowd, even after he issued an apology after Friday’s round. “Last week was hard,” he acknowledged Thursday.

If anything, the off-course distractions appear to have focused Kuchar’s game. His T28 finish at Riviera was actually his worst result since before Mayakoba and came on the heels of six consecutive top 25s (including two victories) and jumped to world No. 22. Despite the challenges that come with calculating distance at altitude, Kuchar hardly seemed to skip a beat at Chapultepec Golf Club, carding six birdies and keeping a clean card until a bogey at his final hole. He sits T3, three shots behind Rory McIlroy, who set fire to the course with an opening 63.

“It was nice to have fans still supporting me,” Kuchar said. “It’s been a great reception. All the practice rounds, had so many people come up and say, congratulations on the win in Mayakoba, hope you do well again this week. It’s been a wonderful reception. I remember being here a couple years ago for America’s Cup and having just a great time. And I still see a lot of the same people that were out four years ago, still come out and follow. And it’s just been great to see the support.”

As for how he keeps playing so well in Mexico? “I wish I had an answer,” Kuchar said. “But Mexico certainly has been very good to me.”