Masters 2019: After near WD, Jason Day finds himself tied for the lead at Augusta National

At the par-5 2nd hole during Thursday’s first round of the 2019 Masters, an all-too-familiar scene was unfolding once again: Jason Day was having back pain.

Except this time, it was playing out on national television for all to see: the dramatic sight of his trainer stretching out the 31-year-old Aussie on the 2nd tee at Augusta National after Day reportedly injured his back bending over to pick up his daughter from the putting green.

It looked as if another WD was in store for the No. 14 player in the world, as he had just withdrawn from the Arnold Palmer Invitational last month due to back pain.

‘Here we go again’, many probably thought. ‘Another back injury forcing Day to have to drop out of a tournament.’ 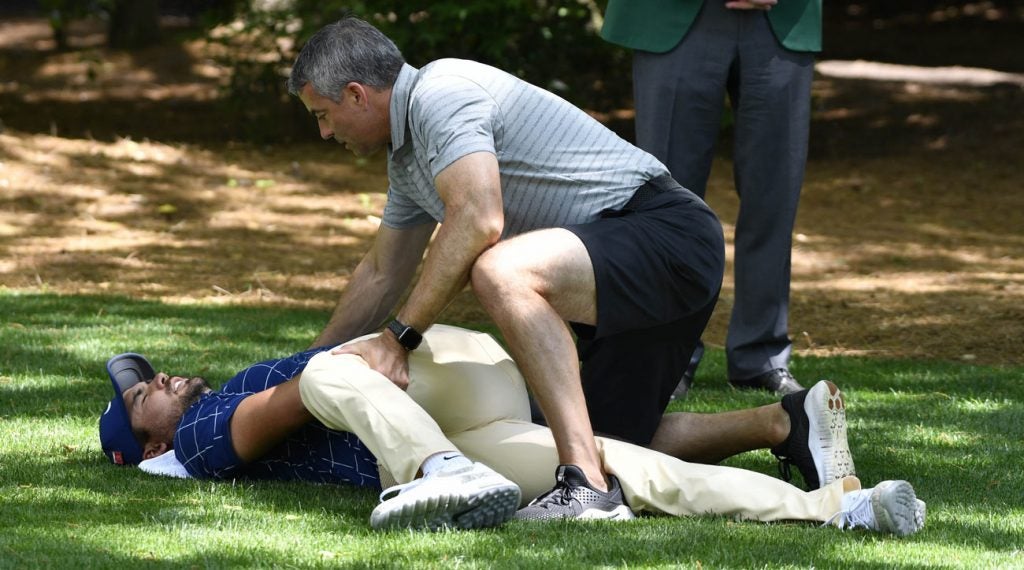 Jason Day getting stretched out by his trainer.
USA Today Sports

However, Day continued on with his first round. And in noticeable pain too, as he walked gingerly across the course all day. It was clear that Day’s back was causing him serious discomfort.

Nevertheless, he grinded out a two-under 70 to finish only four shots off the lead after the first round. But doubts certainly remained about what condition Day would be in for Friday’s action and if he could continue on at the Masters.

However, the 2015 PGA Championship winner returned on Friday and put any those concerns to bed. He went out and shot a five-under 67 in the second round to earn a share of the lead at Augusta National after 36 holes.

It began with three birdies on the front nine; the first of which came at the same par-5 2nd hole he found himself lying flat on his back being stretched out the day before. The second birdie came at the redesigned par-4 5th hole, a hole that allowed only five birdies during Friday’s second round. And the third coming at the par-5 8th hole.

.@JDayGolf carded six birdies on his way to a second-round 67 that earned him a share of the lead. #themasters pic.twitter.com/x0jIlhEldl

Back injuries can be the ultimate kryptonite to a golfer. Just ask that 43-year-old who has captured 14 major titles; he’ll tell you that back injuries can wreak havoc on any career. In fact, Day did just that.

Day’s constant back injuries at such a young age are a foreshadowing of what could come as he moves deeper into his 30s and eventually his 40s. Being healthy is what’s key to having a long, prosperous professional career, and if Day can’t achieve that, his time on the course could be cut shorter than he would like.

But if you ask him about it, he’s well aware of the problem.

“I’m trying to do everything I possibly can to make sure that I have longevity in my game,” Day said. “And that’s something that I need to focus more on now than ever before, just strictly because I have to work harder than most guys, especially with a back injury.”

Tournaments
Masters 2019: The returns are in, and Augusta’s revamped 5th hole is a beast

Maybe he gets the job done this weekend at Augusta National to win his second major title and first green jacket of his career. Or maybe he falls short and his winless streak on Tour stretches to almost 12 months since his victory at last May’s Wells Fargo Championship.

Either way, Day seems to be feeling well heading into the weekend.

“I feel a lot more optimistic now today than I did yesterday,” Day said. “I’m hoping that, bar some outrageous thing that could possibly happen, I’m hoping that I feel this good going into Saturday and Sunday.”

For his own sake, let’s hope that good feeling remains.