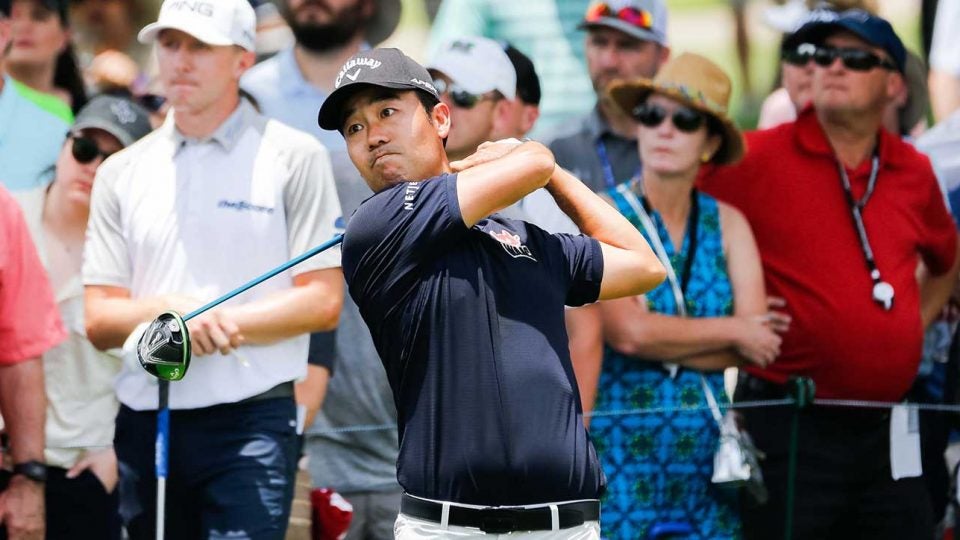 Kevin Na watches a tee shot during the final round of the Charles Schwab Challenge on Sunday in Fort Worth, Texas.
USA Today

Kevin Na entered Sunday clinging to a lead and with Jordan Spieth, among others, within striking distance at the Charles Schwab Challenge at Colonial in Fort Worth, Texas. Here’s what you missed.

How it happened: Na opened the day with a two-shot lead over a group of five that included Spieth, Jim Furyk and Tony Finau, but Na played the front side in three under and made the turn leading Finau by three. A bogey at 10 shrunk his lead to two, but there was a big swing a couple of holes later. Just as Na dropped in a birdie putt on 14, Finau bogeyed 16 for a two-shot swing — and Na’s lead was four with four to play. Na added a birdie on the last to beat Finau (nine under) by four.

Why it matters: It’s the third PGA Tour victory for the 35-year-old Na, who up until Sunday had more than $28 million in career earnings despite just two victories. He’s now won in back-to-back years. After his first win in 2011 he ended a long drought by winning A Military Tribute at The Greenbrier in 2018.

Who lost: Spieth, a Texan with the fans behind him, was playing in the penultimate group but bogeyed the opening hole and made the turn in two over. He shot a two-over 72 (making his only birdie on the 18th) and is still in search of his first victory since the 2017 British Open. He’s trending in the right direction, though. He tied for 3rd at last week’s PGA Championship before this week’s tie for 8th. It’s his best consecutive weeks since the 2018 Houston Open (tie for 3rd) and Masters (3rd).

Bravest shot with a two-stroke lead: Na, on the 13th, either took the wrong line or was taking no prisoners.

Kevin Na is leading by 2.

Most mesmerizing shot of the day: Take a bow, Charley Hoffman.

Fastest round award: Graeme McDowell went off first and returned to the clubhouse well before lunchtime.

Playing solo, G-Mac finished with a 72 at Colonial in less than 3 hours. I’ll hang up and wait for the slow play comments.

Up next: Tiger Woods, Rory McIlroy, Justin Thomas, Phil Mickelson, Bryson DeChambeau, Rickie Fowler and Spieth highlight a stacked field for the Memorial Tournament at Muirfield Village in Dublin, Ohio, which is hosted by Jack Nicklaus.