Keegan Bradley wasn’t even sure he wanted to play Monday’s final round at the BMW Championship. “Truthfully, I was really fixated on making the Tour Championship, and I kind of knew if we didn’t play today, I was in it,” he said. Bradley was right. Based on the 54-hole standings, he was in position to secure the 30th and final spot in the season finale, edging out No. 31 Jordan Spieth in the process.

You already know the rest. Bradley did play Monday, along with the rest of the field. He shot 64. And he took down new world No. 1 Justin Rose in a playoff. Forget No. 30; Keegan Bradley is up to No. 6 in the FedEx Cup Playoffs, in a legitimate position to win the $10 million season-ending prize. “Geez,” he said in his press conference opening. “Things really have changed here over the last day.” 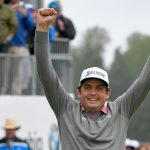 You may also like Your 30-second guide to the BMW Championship: Who won, why it matters, what Tiger did

For a brief moment Monday afternoon, talk swept ’round the golf world that Bradley would make a capable final captain’s pick for the Ryder Cup team. Caddie-turned-NBC analyst Bones McKay suggested during the broadcast that, should Bradley win, he’d certainly be in consideration for the final spot. Johnny Miller added to the fire, calling him the best driver of the ball on Tour. Brandel Chamblee fanned the flames on Twitter. “Keegan Bradley is the best driver of the ball on tour,” he wrote. “Longest straightest. And the best iron player on tour. At the Ryder Cup course the emphasis will be on accuracy. He’d be a great pick to add foursomes options to the the US Team. Which they need.”

Keegan Bradley is the best driver of the ball on tour. Longest straightest. And the best iron player on tour.
At the Ryder Cup course the emphasis will be on accuracy.
He’d be a great pick to add foursomes options to the the US Team. Which they need. https://t.co/g8wUWsMVlm

All that was news to Bradley, who revealed in his post-round presser that he thought the final pick happened after the Tour Championship.

“Listen, I wasn’t on their radar before this. I still probably have to go win Atlanta, and even then, I don’t know,” he said. “Who knows, if I go win Atlanta or do something great, maybe I’ll catch the eye of the guys.”

But Jim Furyk doesn’t get to weigh performances from the season finale at East Lake. Even as Bradley gave his remarks, calling himself an “unlikely” selection, Furyk was preparing to announce the final team addition. So it’s safe to say that Bradley didn’t see himself as a snub for the team; he added praise for the final selection. “Tony Finau and those guys have played so great all year,” he said. “I’m playing good, and I’d love to help the team. But I think the chances of that are pretty unlikely.” 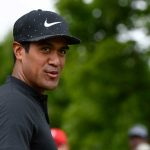 For Bradley, who was a fiery presence on two U.S. teams, the Ryder Cup has been a defining piece of his career. He spoke to the struggles he has faced since his last win (2012) and last national team appearance (2014). “It’s tough to go from being on Ryder Cup teams, being on Presidents Cup teams to not even — to outside the top 100 in the world. That was difficult,” he said.

With more play like Monday, when his 64 shared low-round honors for the day, Bradley could play his way back into contention for future teams. He’s only 32, after all, though he seems older. We saw him burst onto the scene, and then he faded quietly to the background. Now, perhaps, he’s back.

Since his last win, Bradley has gotten married. He’s had a child. He’s gone from rookie upstart to Tour veteran. But he’s never stopped caring; that much was clear as he thrust his arms into the sky upon his final putt dropping on Monday. Ryder Cup or not, he was delighted to be sitting at the winner’s presser Monday night. “It’s so gratifying to get what comes with hard work,” he said. “Sometimes you never even get it.”