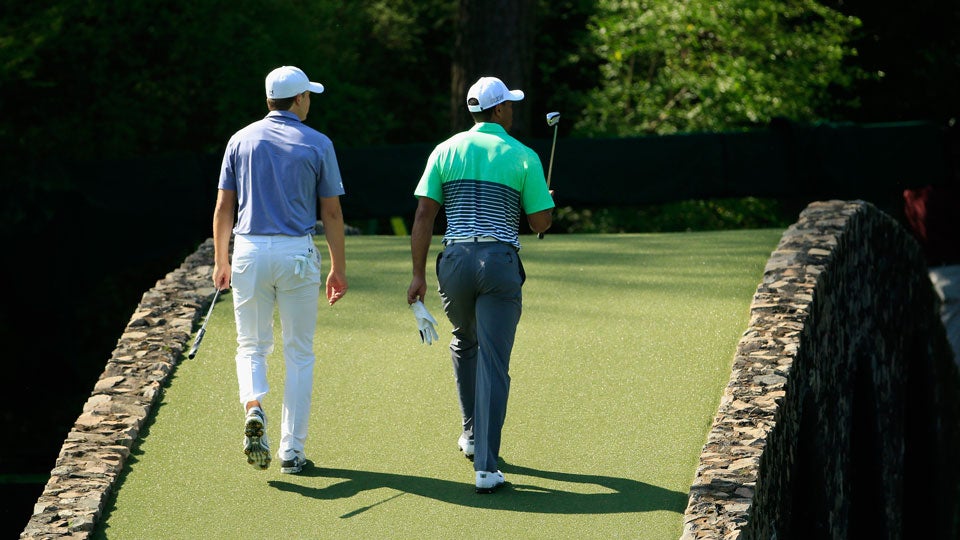 Jordan Spieth (left) and Tiger Woods (right) played together in a practice round alongside Ben Crenshaw at the 2015 Masters.
Getty Images // Jamie Squire

Though he was nowhere near Jordan Spieth on Sunday at the 2015 Masters, Tiger Woods helped Spieth win his first green jacket.

It was a tiny observation Spieth made of Woods during their Wednesday practice round earlier that week alongside Ben Crenshaw that paid off. Speaking at the Valspar Championship on Wednesday, Spieth said he thought his par putt on 16 on Masters Sunday “sealed the deal.”

“I was walking off the (16th) green in the practice round on Wednesday with Ben [Crenshaw] and Tiger and I turned around and kind of looked at it from a different angle,” Spieth said. “I saw Tiger hitting these putts from the back left part of the green towards what would be the Sunday pin and I think maybe a Friday [pin].

“I watched him hit quite a few of them,” Spieth continued. “He obviously knew that was a tricky putt, and sure enough I ended up having a very similar putt, maybe a slightly different angle, for par to really clinch the Masters.”

A man with four green jackets is definitely the man to trust.