After a two-week hiatus, the PGA Tour is back, with the first event of the brand new season in full swing: A Military Tribute at the Greenbrier. Here’s what you missed from Thursday’s action in West Virginia.

Robby Shelton, a 24-year-old who has spent the last two seasons on the Korn Ferry Tour, shot a round of eight-under-par to take the lead by two shots over Scott Harrington, Max Hubbard and Kevin Na, who are six under par after Thursday’s first round.

Shelton’s beautiful round of 62 could have been even lower. He made nine total birdies and only one bogey, which came on the par-3 18th, after he hit his shot into the back bunker and failed to get it up and down. 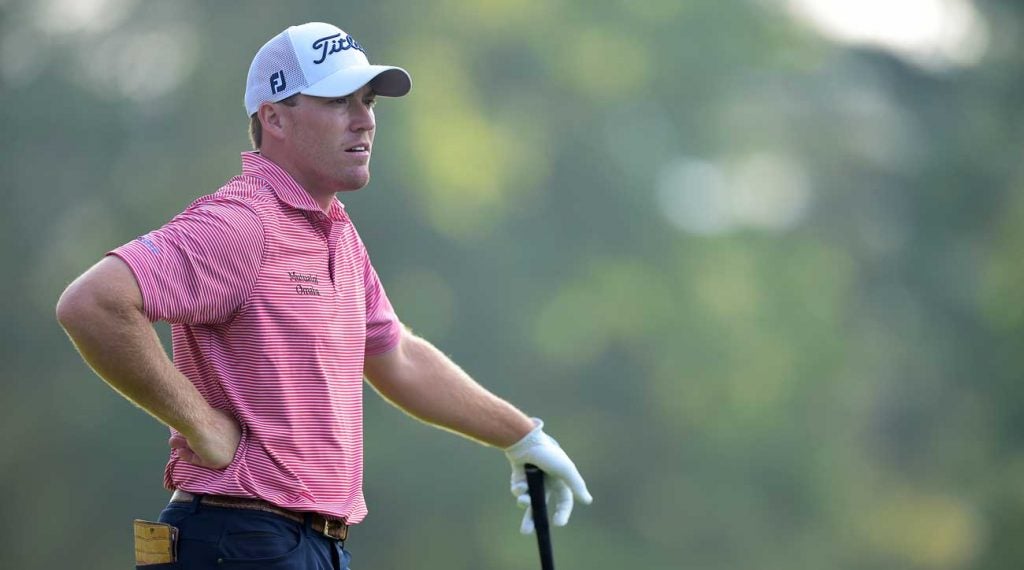 Robby Shelton is seeking his first career victory at this week's PGA Tour season opener, A Military Tribute at the Greenbrier.
Getty Images
Watch out for the defending champ

Defending champion Kevin Na got off to a good start on Thursday, firing a round of six-under-par 64 that included seven birdies and one bogey.

The @GBRMilitary defending champ is walking in putts early. pic.twitter.com/XPZtjbSr1A

Tournaments
Does Rory McIlroy deserve to be Player of the Year? Here’s how our writers would have voted

How did John Daly play?

Long John unfortunately had a tough time on Thursday, carding three bogeys, a double, and only one birdie en route to a round of four-over-par 74. He’s two shots ahead of the last-place player on the leaderboard.

News
Watch Jack Nicklaus surprise a shocked Rory McIlroy with the news he won Player of the Year
How about the other big names?

Jimmy Walker had the best round of the “big name” guys, with an opening 65. He’s currently T7.

Jason Dufner and Keegan Bradley are both three under par, while Bryson DeChambeau and Viktor Hovland are two under.

Greenbrier part-time resident Bubba Watson is one under.

Anything else of note?

Newly-minted PGA Tour Rookie of the Year Sungjae Im became the first player since Tiger Woods to make two aces on Tour before the age of 22!

Sungjae Im is the first player since @TigerWoods to make multiple aces on TOUR before the age of 22.#LiveUnderPar pic.twitter.com/TH1n6ms7Ok