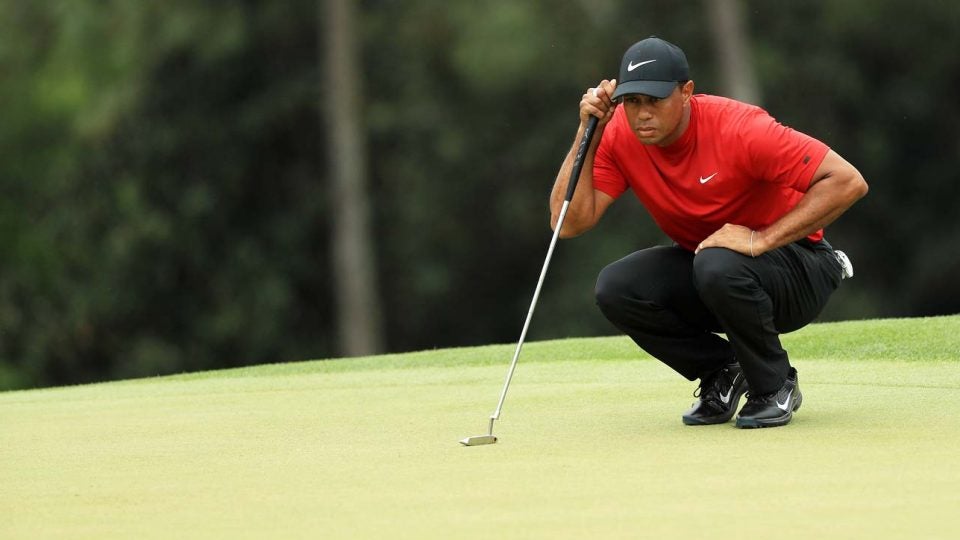 Thinking your way around the course is a valuable asset.
Getty Images

Improving your course management is by far the easiest way to card lower scores, regardless of handicap. Oddly, it’s also one of the most overlooked skill sets, a fact that inspired me to create DECADE Golf, a course and game management system based on my analysis of millions of PGA Tour swings and volumes of Strokes Gained data. For fun—and for your edification—I recently compared DECADE principles to Tiger Woods’ final round of the 2019 Masters, a carefully calculated 70. As you’d expect, Tiger is a master at game management, especially at a place like Augusta National, as strategic a course as any. Tiger hit some great shots en route to his fifth Masters win, but he made even better decisions. Borrowing just a few will interject some smarts into your shot selection—the first step toward course management mastery.

Let’s start on the par-5 8th. Following a big drive, Tiger sat 258 yards from the hole. He pulled a long iron, then backed off, asking caddie Joe LaCava, “The grandstand long is fine, right?” With LaCava’s nod, Woods switched to a 5-wood and proceeded to hit the shot long and right, to the base of the grandstand. Not the greatest result, but the decision to club up was brilliant. A perfect long iron was likely the correct club, but even Tiger knows that golfers rarely hit perfect shots, himself included.

News
Tiger Woods’ high school teammates describe what he was like
Deciding when to get aggressive and play toward the pin requires patience.

The key to shot selection is understanding that you can’t compare one outcome to another. You must consider the average score of a million iterations of each shot and choose the option that has the least number of bad outcomes. Said another way, play for the best possible mishit. It’s hard to make this choice in the heat of battle, but it’s what the best players in the world do, either intuitively or intentionally.

Fast-forward to the 12th and 16th holes, Augusta’s iconic back-nine par 3s, where Tiger played his tee shot on both to the middle of the green. Aiming for the middle of the green isn’t the worst choice you can make. It’s not the best, either. A “one-size-fits-all” decision-making process doesn’t work in this game, because it’s played, over time, on a nonuniform field of competition—all holes and courses are different. So where should you aim? My answer is always the same: “It depends.” Here’s a rule of thumb: When you’re inside 130 yards, the weather is cooperating and the pin isn’t located next to a penal hazard, take dead aim at the flag. Nos. 12 and 16 at ANGC play 155 and 170 yards, respectfully, and the Sunday pins are typically set close to hazards—anything but green-light situations, per the rule of thumb. Tiger knew it. His playing partners, Francesco Molinari and Brooks Koepka, didn’t, and they both found the water on 12. The situation and emotion got the best of them. Deciding when to get aggressive and play toward the pin requires patience. Think of it this way: It’s far easier to intentionally not lose strokes than it is to intentionally gain them.

Tiger further separated himself from the field with pinpoint distance control on approach shots. When I first start working with a Tour player, I look for a situation where I can point to some recreational players nearby and say, “Those guys have no clue how far they hit their irons, do they?” The pro chuckles and of course replies, “Nope.” I then let them in on the joke by telling them, “You don’t either.” Tiger does.

According to a model developed by my colleague Lou Stagner, Tiger hits 49.9 percent of his approach shots from 150 to 200 yards in the fairway past the hole (No. 1 on Tour). This means that the other half of the total number of approaches from this distance land short of the hole. Thus, on average, Tiger, statistically, is always pinhigh. (Tour players, on average, stop approaches almost two yards shorter of the pin than Tiger.) It’s an overlooked stat, but in simple terms, it’s the long-game equivalent of “getting your putt to the hole.” Tiger is the master of always having enough club, and it translates to closer proximity to the hole, an obvious bonus.

Knowing when to be aggressive, staying patient when the opportunity doesn’t exist and playing for an average or bad shot (instead of a good one) is what propelled Tiger to victory last Masters Sunday, even as he completed his round surrounded by thousands of appreciative fans. It wasn’t pretty: A flared tee shot that finished on the right side of his normal dispersion pattern, an approach shot that finished short but intentionally so, leaving him plenty of green to work with, a safe chip and two safe putts. But it was all that he needed to do. Smart.