Tiger Woods’ high school teammates describe what he was like 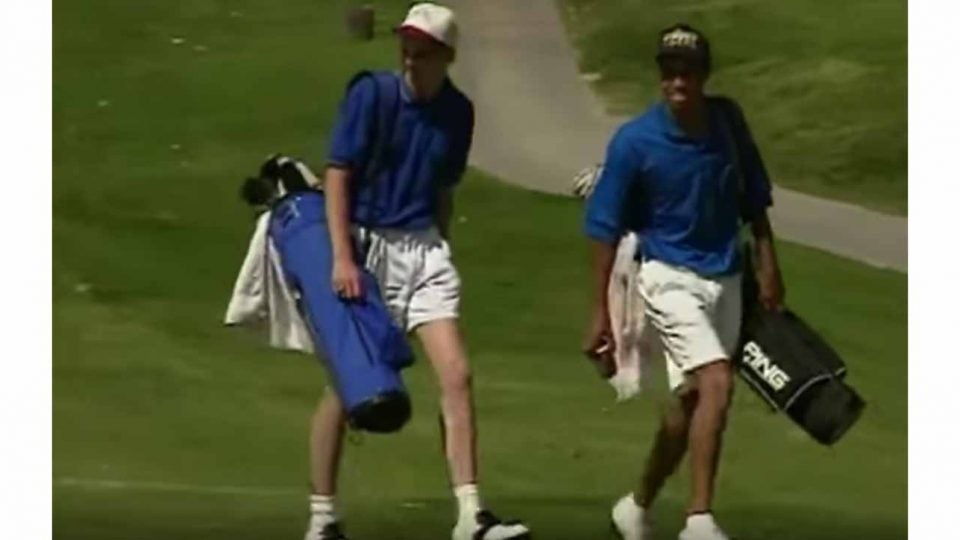 What was it like to walk the fairways alongside high school Tiger Woods?

Welcome back to the Tiger Woods YouTube Project, where we’re checking out one video from each year of Woods’ life, looking for some insight into the golfer — and guy — that he would become. This week, that means taking a look at Tiger the teammate at Western High.

Chapter 6: What was it like, being Tiger’s high school teammate?

For the first five chapters, I’ve brought in some of my esteemed colleagues as well as knowledgable, relevant guests. That’s all well and good, and it will continue. But I wanted to take the reins today, to tackle one of these on my own. I wanted to walk you through Tiger Woods in 1993, a junior in high school. This should be easy for you — just follow the steps.

1. Watch the video below.

Some videos are best broken down holistically, but let’s start chronologically here and run through this thing together. Timestamps and screenshots are included, free of charge!

0:00. Before we even press play, let’s check out the numbers. Only 24,822 views on a throwback Tiger Woods YouTube video? Given the number of Tiger rabbithole excursions most golf fans have undergone, that seems low. Plenty of titles scream “ULTRA RARE” in all caps, but few actually deliver on the promise. Kudos to the TWYP, I guess, for unearthing this beauty. On to the action.

0:04. An opening driver and … good lord. That noise at impact! I wish I knew the make, model and specs on that driver — and the swing speed, for that matter.

0:14. An ongoing development well worth tracking is Tiger’s snapback collection. We’ve seen Lakers. Bulls. Miami Hurricanes. And here, a Grambling State Tigers hat. I get the Tiger connection, but how he ended up pro-Grambling St. is a story of its own. 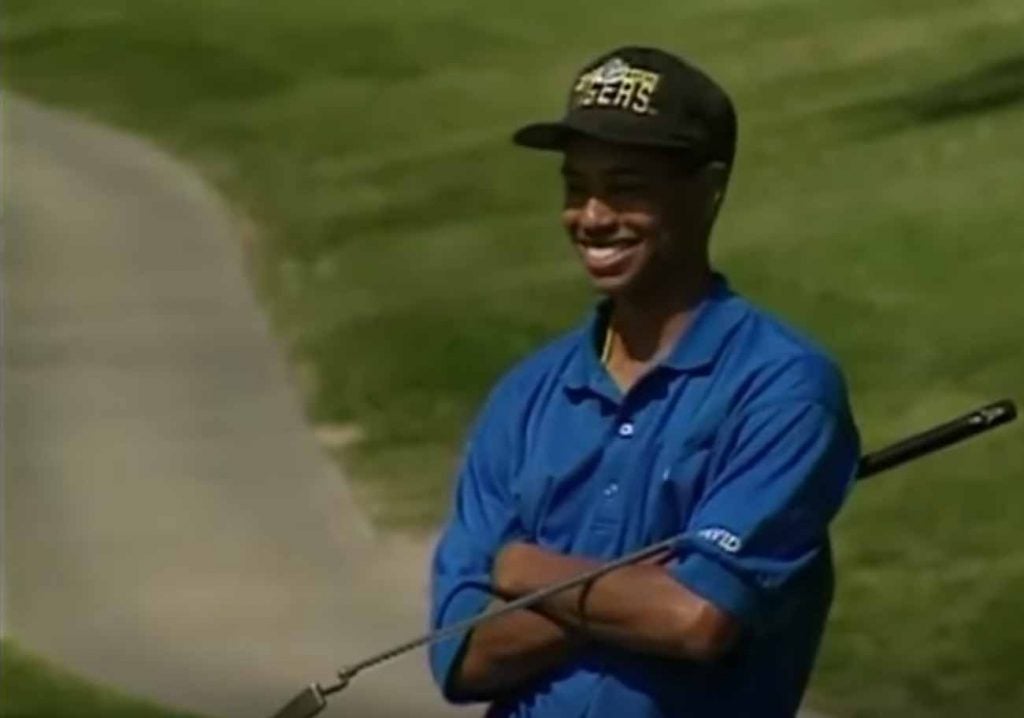 0:35. Tiger has truly won an astonishing number of trophies. That’s obvious, but it’s still something else to see it, and to remember that he’s just a junior in high school. He had played so many golf tournaments by this point in his life. There would be more.

This move — pausing Tiger Woods' high school golf match to make fun of its insignificance — might be the boldest intro in the history of sports television.

0:49. Thus begins the BOLDEST journalistic visual trick of the entire YouTube project. This ESPN host — do we know his name? — is doing his schtick in the very same shot as Tiger walking with his teammates? He’s talking about Tiger like he’s not there, when the entire point of the shot was to show that he IS there? The 90s, man. 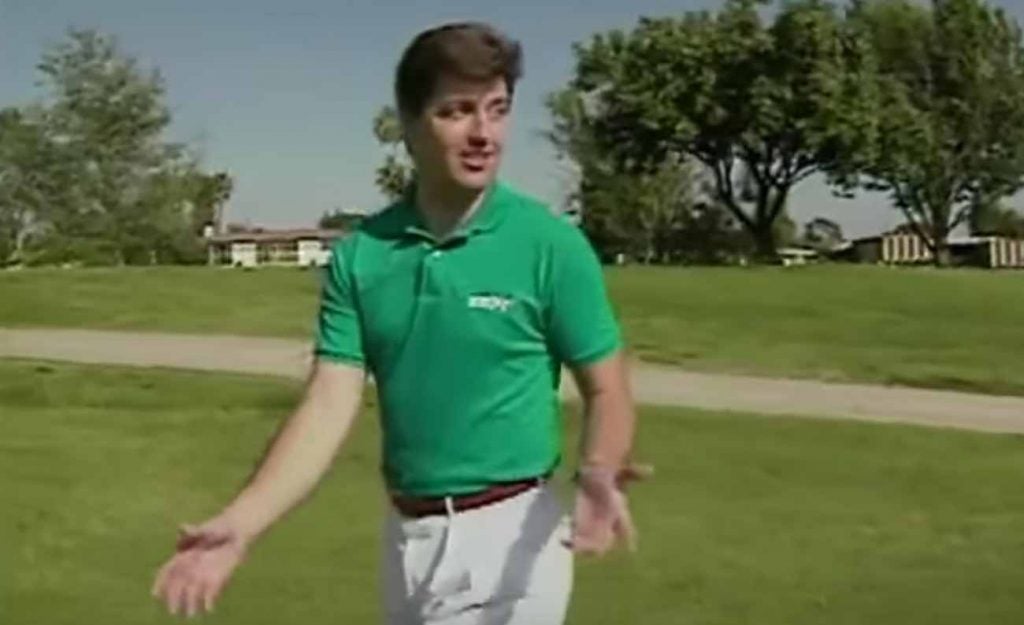 The look of a man fully devoted to his bit.

1:23. What’s up with guys carrying their clubs around with their clubs facing backwards? When did the tide turn on that one?

1:35. Here’s what Tiger says about being on his high school team: “It’s normal. I’m a normal teenager. It’s just that I do one thing a little better than the average teenager. And that’s play golf.”

First of all, this is a reminder that for so long, Tiger Woods said the exact correct thing, every time. Yeah, his father Earl was full of bluster and wild confidence, but not so much Tiger. Look at that quote: it’s exactly how he would want to come off. Confident. Humble. Understated. It’s perfectly executed. But secondly, Tiger really seems to mean it. Obviously he’s selling himself short, but he’s showing a clear desire here to be one of the guys.

1:50. Teammate No. 1 (rocking a Stanford hat, by the way) reaffirms the same thing. “He’s just a normal kid. He’s just a good golfer. The only thing that really gets me is when people come up and ask for his autograph. That’s just kind of … weird.” Buddy, just wait a couple years. 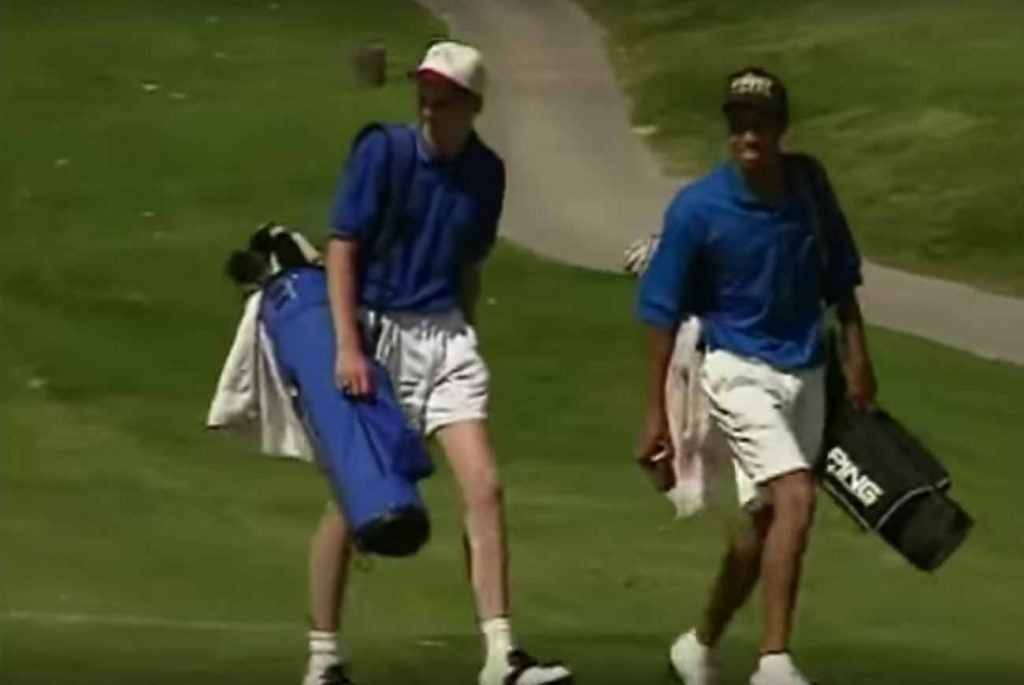 Objectively, Tiger seems to have "the look" down slightly better than his teammate.

2:11. Enter this legend. “If it were me, I’d be all cocky and everything. But he’s always just real mellow about it,” says the kid with the blonde spiky hair. He looks like he’s having a revelation as he says this, like he’s never considered it before.

Sidenote: growing up in small-town western Massachusetts, this is exactly how I assumed every kid from California looked. Dead ringer. 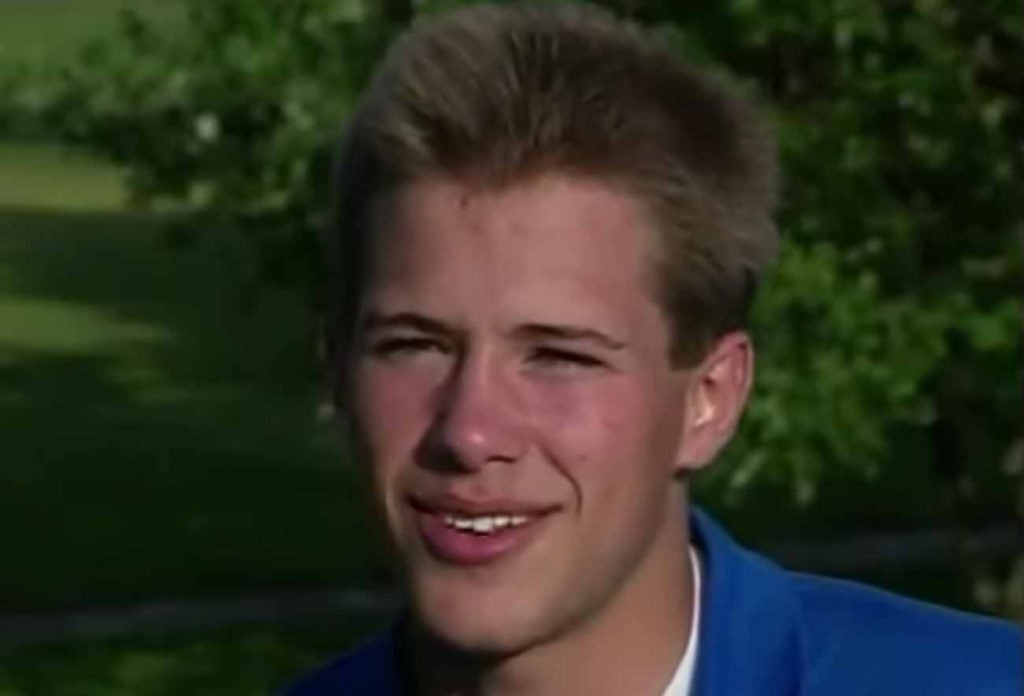 2:35. The sneezing compilation is definitely a new one. Tiger has said over the years that he’s still somewhat allergic to “his job” by which he means various components of grass, trees, leaves and pollen. Believable, based on this footage.

2:49. The most revealing moment into Woods’ future comes at the end of this “Tiger being fun” montage, when he side-eyes the camera and says, “Haven’t you guys got enough yet?” The editing makes it seem like he’s joking. I’m not so sure.

3:30. “I told my wife when he was three weeks old that he was going to be great. She didn’t believe me.” Earl Woods coming in HOT! Your wife didn’t believe her son was the chosen one three weeks in? Yeah, no kidding, Earl. As always, there’s such a temptation to laugh at Earl’s proclamations, because they’re absurd, but you can’t. You can’t! Because he was right.

4:01. A rare Kultida sighting! In our early Tiger years, we’ve seen plenty from Earl, but so little from Tiger’s mother. Her line here about Tiger always being her baby is sweet. It humanizes the entire enterprise. It also reminds us who’s really in charge. 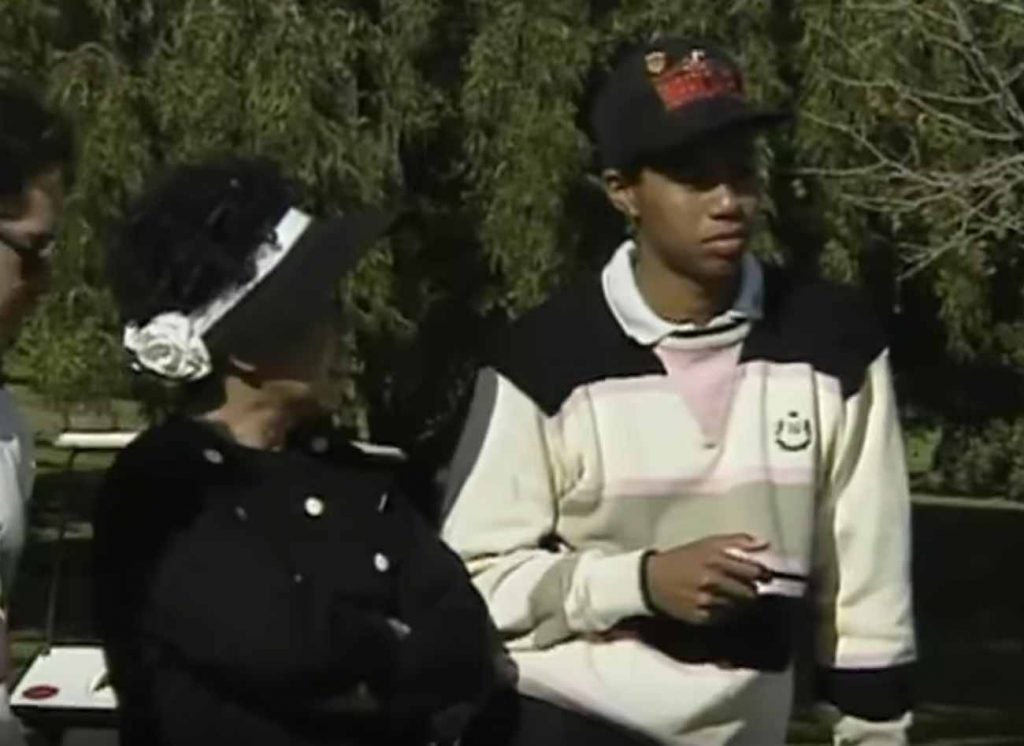 Tiger Woods (in Hurricanes hat) alongside his mother Kultida.

4:27. Another absurd answer that just sort of works because it’s Tiger saying it. Does he ever get intimidated?

“No. Because we had one tournament at the Junior Worlds when I was 11 years old, my first year at the 11-12 age group, and on the very first hole of the last day, I’m trying to win the tournament and this kid, this par-4, this 12-year-old kids drives the green. And that intimidated the hell out of me. And found out that I end up beating him that day. And my dad and I had a long talk about it. And after that, nothing’s ever intimidated me. Ever.

The last “ever” really seals it.

5:20. 4.33 GPA? Isn’t it out of 4? More importantly, our man at ESPN throwing a wardrobe change at us from nowhere! Coming in for the close in his finest maroon. 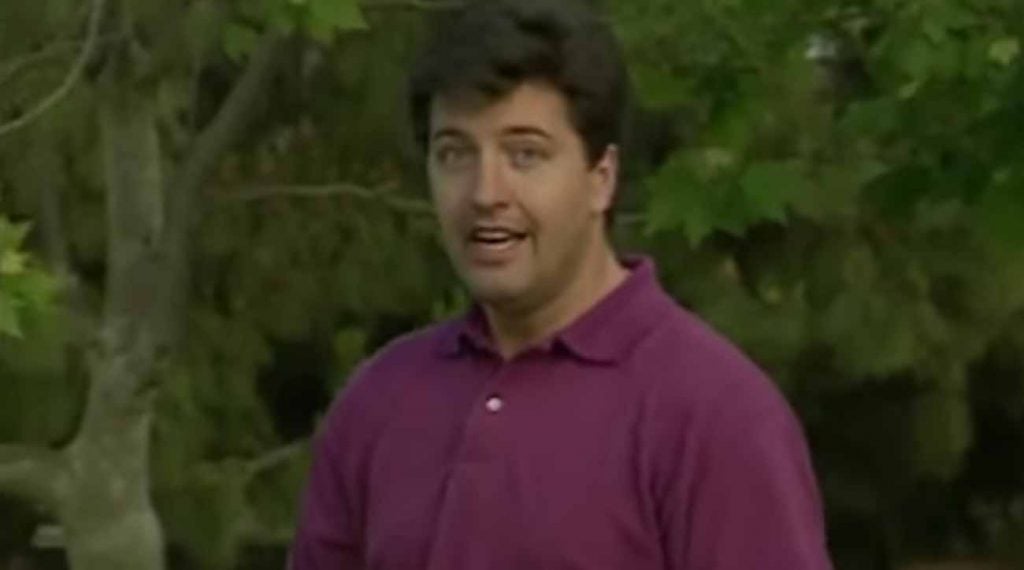 5:37. “This feels like my sanctuary, away from the media,” Woods says. It’s a dark irony, the way this interview crows about being the first to see Woods at work in a classroom without really acknowledging that what they’re doing — intruding on his school life — is something Woods especially hates. This anti-media thing would be around for a while. 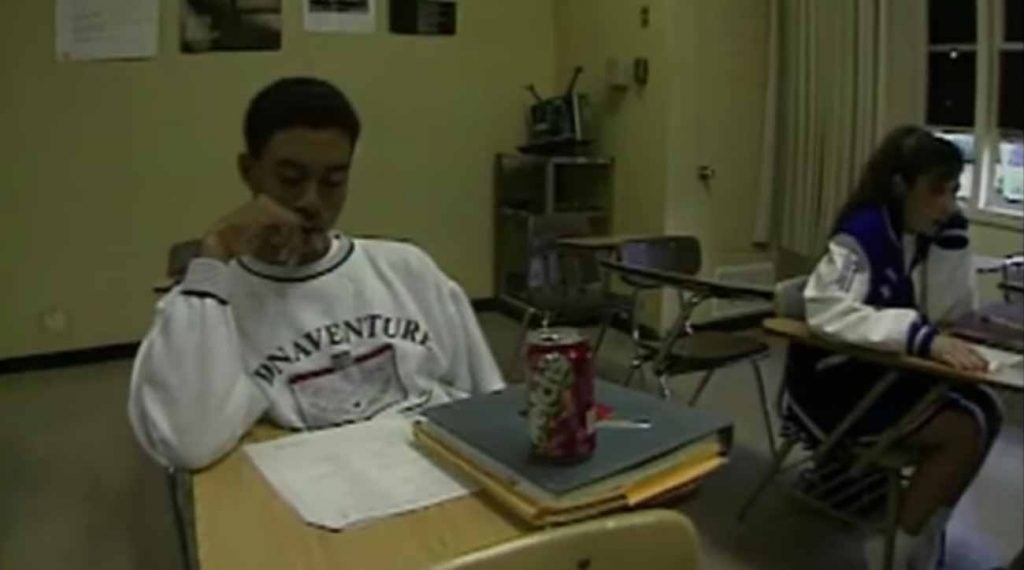 Bonus points for whoever can identify that soda can.

6:01. “But when the media comes in, you’re not a high school teenager anymore. You’re somebody else.” This basic mindset informs plenty of the initial (and ongoing) distrust of the media from Woods’ camp. Ah, for the days of mechanical pencils, though.

6:27. Just how good is Tiger from 100 yards? Oh, I dunno, he might literally hole out this particular wedge shot. So, yeah — pretty good.

6:45. Tiger college recruiting?! This is delicious to watch indeed. Even more so when you consider the possibility that Phil Mickelson could have hosted Tiger at Arizona St. during a recruiting visit. 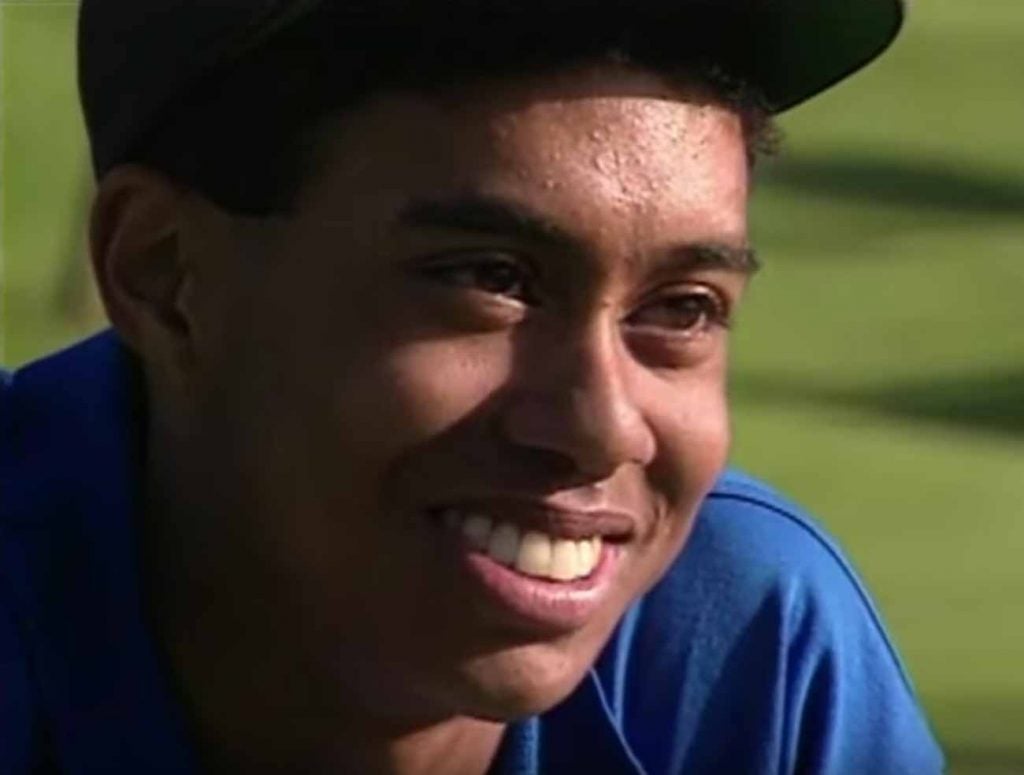 “Your sources are dead wrong. We have not even discussed it yet.”

Well, it’s a particularly good guess, at the very least.

This feels a bit eerie, really — it would have been more comfortable for all involved had Earl just agreed that Tiger loves golf. I think something about the word “addiction” makes it all seem slightly less healthy. But that’s not to say Earl was wrong … 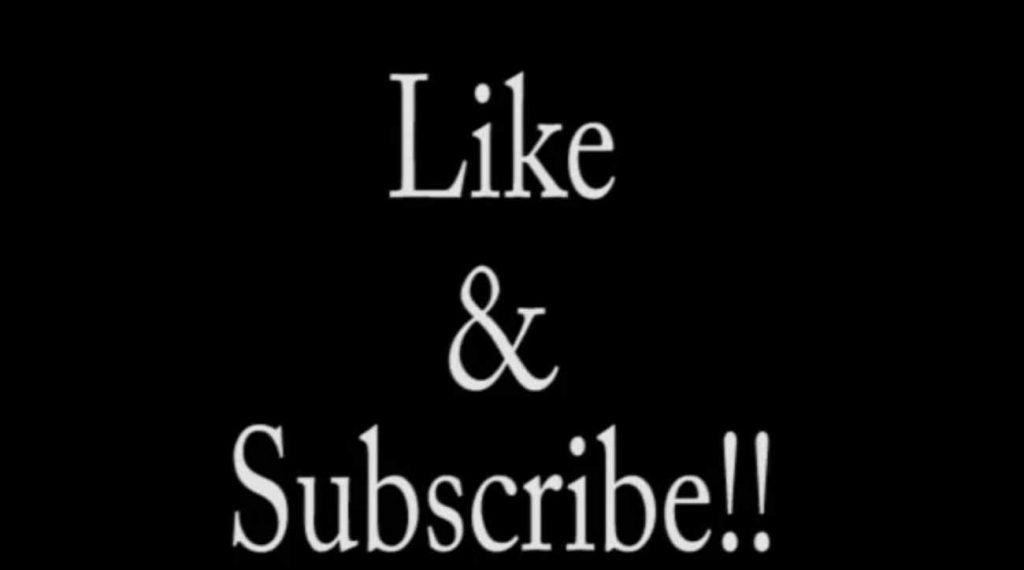 A bit of a clunky way to end a fine film, if you ask me.