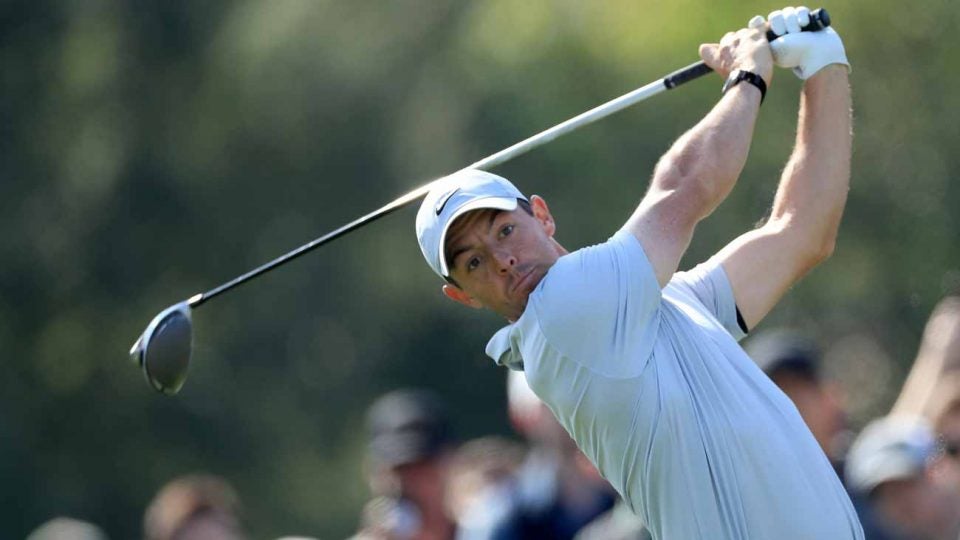 Rory McIlroy tees off during Saturday's third round of the Genesis Invitational.
Getty Images

Befitting of the host city’s traffic, the Genesis Invitational at Riviera Country Club just outside of Los Angeles is pretty congested at the top.

Matt Kuchar no longer holds the sole lead as he did after the tournament’s first two rounds, but he is among three at the top, with Rory McIlroy and Adam Scott. Two golfers are a shot back. Two more are two shots back.

The final pairing of Kuchar-McIlroy-Scott has no shortage of star power, with 40 wins among the three of them.

Here’s everything you missed from Saturday’s action at Riviera Country Club.

Kuchar entered the day with a two-shot lead before going back and forth with McIlroy on the back nine. His bogey on 16th gave McIlroy a one-shot advantage, but Kuchar rebounded with a birdie on the par-5 17th to pull back into a share of the lead on his way to a 1-under 70. McIlroy was consistent, with four birdies and one bogey, though his missed birdie putt on 17 to match Kuchar was costly.

Scott shot 3-under on his back nine, his birdie on the 18th pulling him into a share of the lead.

Maybe a better question is who isn’t. Russell Henley and Harold Varner III are one shot back. Joel Dahmen and Dustin Johnson are two shots back. Max Homa, Talor Gooch and Sung Kang are three behind.

Did anyone else make a move on moving day?

Joining Gooch for the day’s low round of 64 was Hideki Matsuyama, who started the day 10 shots behind the leaders but is now just four shots behind. He shot a crisp 5-under on the back nine at Riviera, including an eagle on the par-5 10th.

More specifically, what happened to Tiger’s putter? Woods’ flat stick failed him to the tune of 33 putts for his round, leaving him at 5-over 76 and 15 shots behind the leaders.

Woods entered the day nine strokes off the pace, but struggles on his opening nine doomed him. He four-putted 13, three-putted 14 and putted off the green on 17, all of which means his pursuit of the PGA Tour’s all-time wins record will likely have to wait another week.

What happened to Ryan Palmer in the sand?

If this is even painful to write, you can imagine what Ryan Palmer was feeling on the par-3 14th.

Finally, on his sixth shot from the same bunker, Palmer splashed out to 11 feet. His two putt netted him a rare sextuple bogey (6-over par).

How can I watch Round 4?