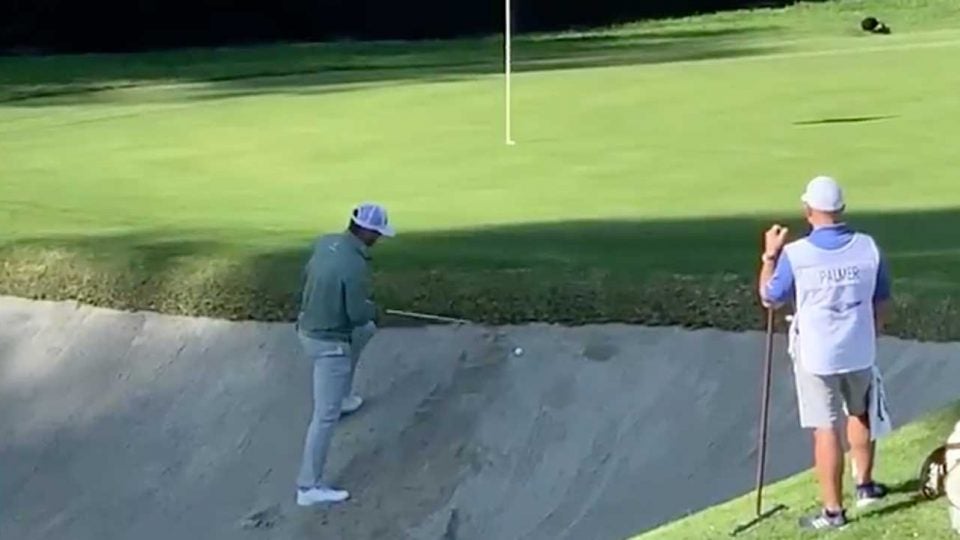 PACIFIC PALISADES, Calif. — The difference between pros and amateurs might never be more apparent than in bunkers, but Ryan Palmer gave us all something to take solace in Saturday at the Genesis Invitational.

Palmer missed his tee shot on the par-3 14th left of the green, in a greenside bunker. It’s a tough miss, but not all too deadly. Players have scrambled for par successfully at a 67% clip from that bunker this week. Palmer not so much.

With 40 feet between his ball and the hole, most of it all carry over the rest of the bunker, he left it short and in the trap, near the lip. His next attempt needed a higher trajectory, but didn’t clear the lip, either. It even moved back away from the hole, which for him was a nice reprieve. Only, his third try fell short of the lip again, and the high amount of spin dug the ball into its own little crater.

Palmer’s fourth (for double bogey, mind you) was a big splash that didn’t move much forward and then rolled back into a footprint of his. His fifth was a bladed try out of that footprint that never had a chance. Finally, on his sixth shot from the same bunker, Palmer splashed out to 11 feet. His two putt netted him a rare sextuple bogey (six over par).

On the PGA Tour’s ShotLink tracker, it’s quite horrifying. In person, it’s even worse, as one spectator who filmed it found out. Enjoy, if only a little bit, the groaning and commentary for the fans.

Palmer plummeted on the leaderboard, but he was able to salvage his standing a bit with an eagle on the par-5 1st hole and two birdies in his next five holes.