Gary Woodland is in command, and other things you missed from Round 2 of the Sentry TOC

Gary Woodland and Xander Schauffele had the rounds of the day in Maui on Friday, with scores of six-under-par 67 on Kapalua’s Plantation course — Woodland’s second round of 67 in a row.
Here’s what else you missed from Round 2 of the Sentry Tournament of Champions.

1. Gary Woodland is in command

After a second consecutive round of six-under-par 67, Gary Woodland is three shots clear of his nearest competitors (Bryson DeChambeau, Rory McIlory and Kevin Tway) at the tournament’s halfway point.

Heading into the weekend with a three-shot lead. ?@GaryWoodland ends Round 2 with a birdie to get to -12.#QuickHits pic.twitter.com/mrxjlC7Fvr

Woodland has posted 16 birdies over two rounds — including five in a row on Nos. 11-15 on Friday. The 34-year-old Tour veteran recently signed an equipment deal with Wilson Golf and is seeking his fourth career Tour win this week. 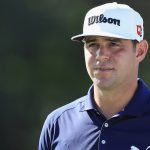 Bryson DeChambeau and Rory McIlroy shot up the leaderboard into a tie for second after shooting rounds of 68 (five under par) on Friday.

He closes Round 2 with three birdies in his final five holes.#QuickHits pic.twitter.com/s3p07nfutV
— PGA TOUR (@PGATOUR) January 5, 2019

You may also like ‘It’s so situational’: Bryson DeChambeau says his pin-in putting is still in experimental phase

After posting an impressive opening round on Thursday, Dustin Johnson struggled to a one-over-par 74 on Friday. The two-time Sentry champion had a rough start, going four over par in his first six holes. Johnson double-bogeyed the par-4 fourth hole after he played the wrong ball from a hazard and was forced to take a two-shot penalty after locating his original ball.

D. Johnson on his 2-shot penalty for playing the wrong ball on the 4th hole: “I guess now understanding the new rule, I still, I got to identify, if it moves it’s not a penalty. So that won’t ever happen again. I can promise you that,” he said.

Though DJ fell 10 spots on the leaderboard to T12, he’s only seven shots back of Woodland’s lead with two rounds to play.

4. Marc Leishman had the bounce-back of the day

After suffering a triple bogey on the par-4 sixth hole, Marc Leishman birdied six of his remaining 12 holes to finish with a second round of three-under 73. Leishman is currently in fifth place, four shots back of Woodland’s lead.