The Etiquetteist: Four questions you should ask yourself before chipping off a green

With the 2019 U.S. Open still fresh in our memories, let’s reflect on the tournament’s signature shot: Gary Woodland’s chip from the edge of the 17th green on Sunday. Right move for Woodland, no question about it, as a big, unruly brow was in his putting line. But what about those of us not playing for a title? In a casual round, is it ever okay, given the turf we risk ripping up, to pitch off a putting surface? Like a testy chip, this one’s worth studying from all sides. Ask yourself these four questions:

1. Are you good enough to pull off the shot?

Just because it was the right shot for Gary Woodland doesn’t mean it’s the right shot for you. Chipping from a tight lie takes serious skill, and not just anyone can pull it off. “The people who can are mostly on Tour and pretty much everybody else is just as likely to take a huge swath out of the green, or blade the chip,” says Golf Channel analyst Brandel Chamblee. “The old rule that your worst putt is better than your worst chip applies here.” In other words, using the flatstick isn’t only proper etiquette. It’s also your best chance of making par. 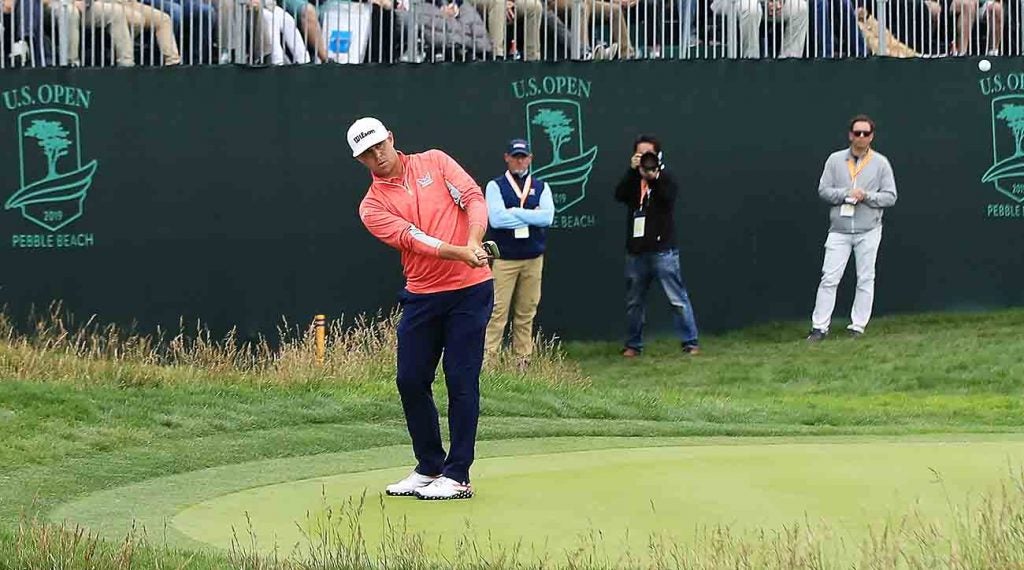 Woodland's deft chip off the putting surface on 17 all but sealed his win at the 2019 U.S. Open.
Getty Images

2. Are you playing in a cutthroat match?

A purist would tell you to play it as it lies. But since purist is a synonym for “tedious pedant,” you’re not required to listen. Here’s another option: In consultation with your playing partner, settle on a reasonable place to drop off the green. In the interest of fairness, try to pick a spot with a similar degree of difficulty as your pre-drop location. You’ll likely find one straight behind you, just off the green, on line with the flagstick, where you can wield your wedge without scuffing up the putting surface. That’s a better choice than moving to another spot on the green, where you’d likely face an easier shot. That would provide you with an unjust advantage, and you want to be able to sleep at night, right?

3. Does the grounds crew really deserve this?

So, you’re being stubborn and insist on chipping from the green anyway. At least have the courtesy to minimize the damage. Don’t play a sand wedge with a lot of bounce, as you’re likely to jam the leading edge into the turf and carve out a Mel Torme-worthy toupee. Do your best to clip it clean and repair the divot as best you can. Let’s be clear: You haven’t cloaked yourself in glory. Maintenance crews work hard on course conditions. Your decision was something of a slap in their face.

4. Is putting around the obstacle really so shameful?

This one’s pretty simple: Play it as it lies, and play it with your putter. That’s how they do it at no less a club than Riviera, where the par-3 6th hole has a bunker in the middle of the green. Even when the sand is in their way, members aren’t allowed to chip off the putting surface. That’s a privilege reserved for PGA Tour players. And a rule worth following wherever you play. To punctuate the point, we’ll close with these words from Shawn Cox, director of golf at the Grand Golf Club at the Fairmont Grand Del Mar in San Diego. “I feel similarly about this as I do when people complain that their lie isn’t perfect in the bunker — well, you shouldn’t have hit it there,” Cox says. “Same when you leave yourself in a position where you might have to putt away from the hole on your first putt. You hit it there. Now take your medicine and move on.”