Another balmy day in the Bahamas. Another opportunity for Tiger-watching.

Here are five things we learned about the tournament host from round two of the Hero World Challenge.

While an eagle on the par-five ninth drew a gentle fist-pump from the man himself, the frenzied response occurred on social media, with everyone from Hunter Mahan to an emoji-happy Michelle Wie weighing in to mark the moment: Tiger had leapt into a brief tie for the lead.

2. For all the worry about yips, he still can chip

If Hank Haney, among others, is to be believed, Woods is still bedeviled by short-game demons. But that doesn’t mean he can’t do wizardly wedge work, as he proved on Friday with a number of deft chips, mostly notably a 60-wedge that he pinched off the front of the 17th green, lofting his ball onto the collar and letting it spill down to within tap-in range of a back pin. 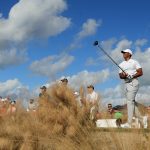 Here’s another indication of how Tiger moves the needle: the way his play affects the betting lines. On the strength of his showing through two days in the tropics, Woods is now listed at 20/1 to win the Masters on the Irish gambling website, Paddy Power. To put that in perspective, that’s the same as Rickie Fowler, and oddsmakers have Phil Mickelson as more of a long shot: Lefty rings in at 35/1.

4. Tempered expectations, and a temper, too

In a post-round interview Friday, Woods downplayed his performance, emphasizing that he’s a long way from where he wants to be. On the course, though, the occasional club-slam and unprintable utterance suggested that his own expectations burn a lot hotter than he’s willing to say.

5. His relationship with the press hasn’t changed

Tiger is swinging freely. But talking freely? Not as much. Four back surgeries and all these years, a few minutes from him at a mic still comes off like pulling teeth.