FARMINGDALE, N.Y. – Bethpage Black can make golfers suffer, but you had to squint hard in the Long Island sun on Thursday to find a moment where Brooks Koepka looked even slightly uncomfortable on what turned out to be a record-setting day.

It almost happened — almost — just before 10 a.m. under a bright, clear sky. There stood Koepka in the right rough on the par-4 15th hole, glaring down at the ball in the thick grass between his shoes. The 15th is the scariest hole on the Black and one of the most daunting in the world. He had 205 yards left, up a steep slope, to reach the hole. From that spot, many guys would punch it back in the fairway and play for a 5. Koepka had another idea. A few feet away, a line of fans leaned over the rope for a closer look.

“Do you want me to move them?” asked a marshal.

Most pros would shift those fans out of their airspace, but not Koepka, whose default setting is nonchalance. With a wad of tobacco tucked in his lip, Koepka spit a couple times, dug in and ripped an iron shot that soared out of the grass, up the hill and safely onto the green. He two-putted for par. Nothing to see. It’s fine.

“Luckily enough, it was kind of trampled down a little bit where the fans were,” Koepka said about an hour after signing for a course-record 63 that also matched the lowest round ever at a PGA Championship. “But to get it 15 feet short of the hole and get 4 there was probably the best one of the day.”

The three-time major champion swaggered home from there, going bogey-free to shoot the 17th 63 in PGA Championship history. He also became the first player to shoot 63s in consecutive PGAs. In the afternoon, Danny Lee hit just half of his fairways but posted a six-under 64 that was capped by birdies on 17 and 18. He trails Koepka by one, while Tommy Fleetwood is four back after a 67.

Make no mistake, this day belonged to Brooks.

“That was one of the best rounds I’ve played probably as a professional,” Koepka said. “This golf course is brutal. You can’t miss. You can’t take a shot off, and that’s what I love.”

Bethpage is intimidating, but the other 154 golfers (Brian Gay withdrew) in this field should now fear Koepka, who has won three of the last seven majors he’s entered and looks for all the world like an unshakable, unbreakable force. He began his round by jarring a 40-foot birdie putt on the 10th hole and capped it by canning a 33-footer on No. 9. 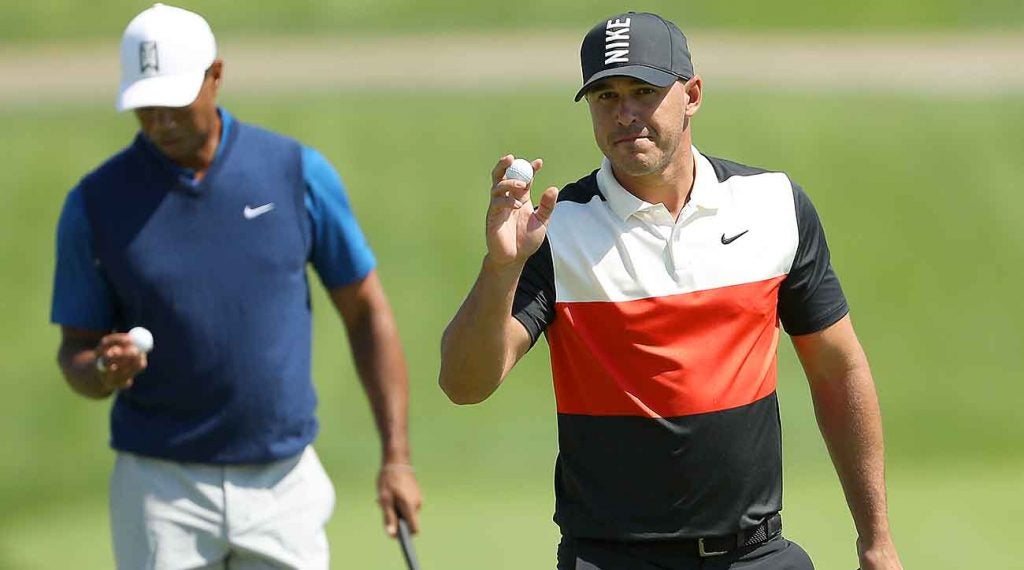 Woods hadn’t teed it up since the Masters and only played nine practice holes this week. (He said he was feeling too sick to show up here on Wednesday.) He hit his first drive into the rough, drew a bad lie and went on to make a deflating double bogey. “It was a good drive and ended up in a bad spot,” he said, “and I compounded the problem with trying to use the backboard behind the hole there and missing a putt I should have made.”

“I fought my way back around there, and unfortunately I just didn’t keep it together at the end,” he said.

Thousands of fans tailed Woods’s group. Among the throng inside the ropes was former New York Mets third baseman David Wright, who declared himself “obsessed” with golf now that he’s retired from baseball. “I read about it, I watch it and I play it. But I’m not ready for a course like this,” he said while strolling along the ropes.

Wright was clad in Nike gear, but he wasn’t out there for Tiger.

As he continues his assault on the majors, Koepka’s legion of admirers continues to grow. Meanwhile, several fan favorites also enjoyed solid opening rounds, as 16 players finished in red numbers. (In two U.S. Opens at Bethpage, a total of six players finished under par.) Phil Mickelson shot a one-under 69, a score matched by Rickie Fowler, Dustin Johnson and Jason Day.

“So it’s the first day, and we’ve just got to be patient with ourselves,” Day said. “There’s a lot of golf to be played, especially for the guys at the top of the leaderboard.”

In his quest to complete the career grand slam, Jordan Spieth bounced back from a double bogey on No. 10 to also finish with a 69. Rory McIlroy went birdie-less for 17 holes before making a 3 on 18. He signed for 72.

“Hopefully that birdie on the last was the turning point, finish on a positive note and come back tomorrow and hopefully get into red figures for the tournament,” McIlroy said.

Everyone is looking up at Koepka, who won the 2017 U.S. Open at Erin Hills, the 2018 U.S. Open at Shinnecock and the 2018 PGA Championship at Bellerive. A fourth major this week would launch him deeper into rarified air. He’s on his way.

“I mean, I’ve never been this confident,” Koepka said. “I think I’m still learning, understanding my game, and I’ve figured it out, and I think over the next few years, I’m excited for what’s to come.”