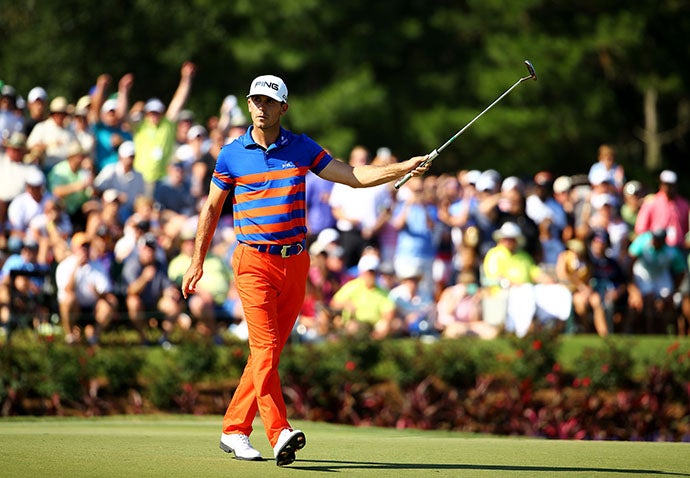 Billy Horschel reacts on the 17th green during round three of THE PLAYERS Championship.
Richard Heathcote/Getty Images

Local hero Billy Horschel was ready to boast Gator pride when he showed up to play the third round of The Players decked head to toe in orange and blue.

The University of Florida alum made moves on Saturday, finishing day three with a 3-under round of 69, three shots back of the current leader. His play was solid, aside from some putting troubles and some heckling fans to contend with – especially those from neighboring Florida State University.

Rival Seminoles made sure Horschel could hear them, taunting him with chants and tomahawk chops, the battle call and gesture used widespread at FSU. Early on in the round, caddie Micah Fugitt yelled back towards the gallery, “You don’t have to be a jerk about it.”

But Horschel settled it in front of a large audience with a birdie on the island green 17th. As he approached, Seminoles fans began their chops, but as Horschel rolled his birdie attempt down the slope and into the hole, it was all Gator fans from there.

The crowd erupted and gator chomps littered the gallery…and fans were given a treat when Horschel returned the favor.

Horschel said he did it less for the Gator fans and more in response to the heckling Seminole fans.

Horschel will make a play for the trophy on Sunday, and, Gator pride aside, he will mean business; likely, his fangs will be bared, ready to chomp down on the competition.