At TPC Scottsdale Stadium Course, 17 is the New 16 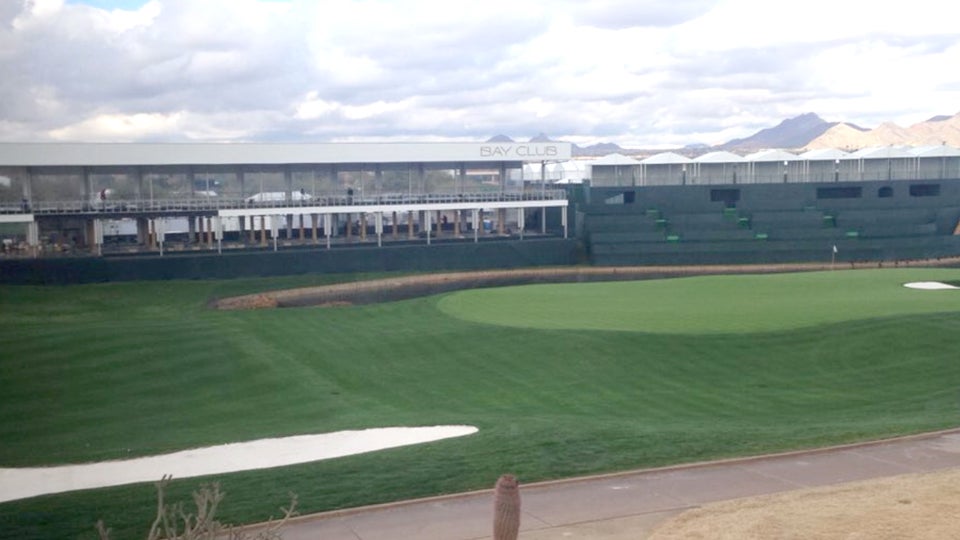 A view of the new and improved 17th hole at TPC Scottsdale, which is adopting the party atmosphere of the 16th hole.
@Jess_Marksbury Twitter

Like gladiators braced for battle, players stepping through the grandstand tunnel onto the 16th tee at this week’s Waste Management Open will find themselves in a raucous setting unrivaled by any they will ever encounter on Tour. Until, that is, they get to the very next hole.

Meet the new 17th at TPC Scottsdale, not identical to the famously riotous 16th hole but pretty darned electric all the same.

For this year’s iteration of an event that bills itself as the Greatest Show on Turf, tournament organizers have enhanced the seating around the drivable par-four 17th to better extend the party atmosphere.

“The idea isn’t to try to replicate the 16th hole, because nothing will ever be like that,” tournament spokesman Ryan Woodcock said. “But the 17th is such a great hole with such great real estate that (the tournament chairman) wanted to up the ante there as well.”

RELATED: How the Phoenix Open Became the Biggest Party in Golf

As part of the changes, the old Corporate Village tents along the 17th were removed to make way for the Bay Club, a luxe venue composed of 21 double-decker skyboxes, including a blowout suite the size of four corporate boxes.

Far from your usual course seating, the Bay Club will feature a formal wait staff, an upscale lounge area and furnishings fit for a five-star resort.

Set on the north side of the 17th green, it will offer commanding views of the risk-reward par four along with a lookout area that allows pass-holders to catch the action on the par-four 10th hole. Tickets to the Bay Club, fetching $55,000 to $110,000 a pop, sold out almost instantly.

There is plenty of other seating around the 17th, including new Greenskeeper Box suites with capacity for 500 spectators, and a collection of Greenskeeper Ring Side Tables with room for another 64 fans. Such additions are just the latest enhancements at a tournament that seems to grow more festive every year.

No hole better illustrates the Waste Management’s evolution than the 16th, an otherwise ordinary short-par 3 that has evolved into golf’s version of the Roman Coliseum, albeit it with more short skirts and stiletto heels. As a reminder of how the scene has changed, look back on this video of Tiger Woods’ ace at what was then the Phoenix Open in 1997. The crowd barely makes a peep until he strikes his shot.

You never hear that sound of silence on the 16th nowadays. Thanks to this year’s changes, the 17th may not be very far behind.