Tour Confidential: Phil Mickelson fallout, and what’s next for the Saudi league? 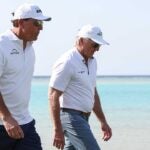 Check in every week for the unfiltered opinions of our writers and editors as they break down the hottest topics in the sport, and join the conversation by tweeting us @golf_com. This week, we break down Charley Hoffman’s rant against the PGA Tour, its rules officials and the USGA, the WM Phoenix Open and more.

Phil Mickelson dominated headlines for the second straight week despite not hitting a golf ball. One week after Mickelson’s Saudi league and PGA Tour comments were published by The Fire Pit Collective, and after Mickelson was heavily criticized by many of his peers, the 51-year-old pro on Tuesday released a public apology on his social media accounts. In a lengthy six-paragraph message, Mickelson called his comments reckless, apologized for anything he said that was taken out of context, granted his sponsors an opportunity to pause or end a relationship with him and said he plans to take some time away from the Tour. What was your takeaway from Mickelson’s mea culpa?

Sean Zak, digital project director (@sean_zak): That he picked and chose his apology subjects carefully. “PGA Tour” was not mentioned once. Phil isn’t sorry for what he’s done/is doing. He’s sorry for how the news broke.

Josh Berhow, managing editor (@josh_berhow): There was a lot there, although what caught my eye was that his second sentence was about off-the-record comments. The author, Alan Shipnuck, who was writing a book about Mickelson, says they were not off the record. Who do you believe? That’s up to you, but I know who I’m going with. My point is this: regardless of how these comments got out, the second sentence of a lengthy apology was an excuse. That rubbed me the wrong way.

Josh Sens, senior writer (@joshsens): Mickleson also said his comments were taken “out of context.” That seems disingenuous. I’d like to know what other context there is in which his comments would mean something different. He said what he meant.

Alan Bastable, executive editor (@alan_bastable): In politics, they talk about October surprises — events no one saw coming that influence elections in the eleventh hour. For the Saudi league, this whole Phil episode has that feel to it. One phone conversation may have deflated the whole thing. As for the apology, yeah, it felt much less like an “I’m truly sorry,” and much more like an “I’m truly sorry I got caught.” He did nothing more with Shipnuck than verbalize the plan he was executing, i.e., using the Saudis for leverage against the PGA Tour, just as many of his fellow pros were. If he was legitimately contrite, he wouldn’t have engaged with Norman and Co. to begin with.

Bamberger: Exactly. It was not a cogent statement, in my opinion.

Golf analyst Brandel Chamblee called Mickelson’s statement “one of the worst apologies I’ve ever seen written.” What about it left a sour taste in some fans’ mouths?

Bamberger: The writing? The lack of candor? That a guy who can convince you that a blue sky is pink did nothing to turn you around on these various issues? I’m surprised he didn’t go in front of a live audience. He plays best that way.

Zak: Part of it is that his apologies in the statement were aimed solely at the people who give him (or would presumably give him) the most money. He apologized to LIV Golf, the company that is set to essentially broker millions of dollars from the Saudi government. He apologized to the sponsors who pay big money to be embroidered on his hat. Did he owe anyone else a grand statement? He could have eloquently included other people who have been let down by his recent approach, that’s for sure.

Berhow: I guess I already answered that a little bit in my previous answer, but Mickelson, as Brandel said, tried to play the victim card here and I’m not sure it worked for him. A lot of it made it sound like Phil was on some righteous path to make golf better, and we just have to trust him. It seemed preachy. But I think Phil can and will rebound from all of this. People are quick to forgive those who ask for it.

Sens: What bugged a lot of people about his original comments was the greed and hypocrisy that people read in them. Mickelson didn’t really apologize for those things.

Bastable: Oh, they’ll forgive. Tiger survived an international sex scandal, ARod and so many others survived juicing scandals. Phil, too, shall endure. Knowing him, he’ll probably win another Masters and be carried off the green by a mob of delirious patrons. The apology was too long and meandering. A good apology should be like a resume: direct and no more than one page.

In the past week, Mickelson has lost some of his sponsors and, reportedly, is no longer the tournament host of The American Express. Are you surprised some of these brands have started distancing themselves from the five-time major champ?

Zak: Not at all. This is one of the things that has been most up for debate in the last few days. These sponsors pay good money to be associated with Phil. But the last month of being associated with Phil has not been a great vibe! Those sponsors have separate partnerships with the PGA Tour, at large, and he’s been acting in opposition to the Tour in a very public way. The onslaught of headlines with lead photos that show their company being associated with those comments and the various implications … once he gave them an out, they jumped at it. Can’t blame them at all.

Berhow: Slightly surprised, mainly because some of them have been tied to Mickelson for so long. Some might have been leaving before Mickelson granted them the opportunity anyway, but Sean’s right, it gave them an out and they took it.

Sens: Not surprised. Mickelson’s own apology made it seem like he saw it coming, too.

Bastable: Clearly Callaway was the most torn, with its “pause” treatment that leaves the door open for Phil to return. These episodes are delicate: when one sponsor goes, it puts immense pressure on others to follow suit. The domino thing happens way more often than not. Tiger eventually got sponsors back; Phil will, too.

Bamberger: He couldn’t possibly continue to be the host of the American Express, proud PGA Tour stop, when he was aligning himself with the PGA Tour. That had to happen. As for the others, as they said in The Godfather, it’s just business. For now, Mickelson is bad for business. That will change. Alex Rodriguez can provide Mickelson with his own playbook.

The Saudi golf league seemed to take a hit after many players pledged their allegiance to the PGA Tour following Mickelson’s comments, but Greg Norman, the CEO of LIV Golf Investments, the financial arm of the proposed league, isn’t backing down. He sent a memo to players and agents saying the PGA Tour could not ban them for joining and also sent a note to commissioner Jay Monahan, saying, in short, “This is just the beginning.” If you’re Norman and LIV brass, what’s your next move?

Zak: I’d release details every week. As the golf-headline-reading-populace, we need something. The PGA Tour is going to be trumpeting itself and all its cash reserves two weeks from now at the Players. LIV should start sharing some of the mostly concrete details they’ve locked in. A name or two from the list of players who have signed up. A couple courses that will be involved. Whet the appetite for more.

Berhow: There’s too much money behind all of this for it to go away and I don’t think they have the liberty to retreat and rethink their plan. For better or for worse, it’s fresh on golf fans’ minds and needs to stay that way. But some sort of commitment — any time of commitment! — like from a player, a venue or some sort of schedule needs to come to light to get players and fans interested.

Sens: Get something on the schedule. Make it as compelling an event as you can. A legal battle might come later, and — at least according to antitrust attorneys I’ve spoken with — Norman and Co. might have a legitimate case. But launching a formal fight against a ban seems like putting the cart before the horse if you don’t have enough big-name players to come over in the first place.

Bastable: Focus on growing the Asian Tour. The proposed super league is so charged right now that no players of note will go anywhere near it. At least not now. Check back in a year or two. You can be sure the Saudis and LIV aren’t folding up the tent, and, as Berhow says, there’s too much money on the table for every player to look the other way.

Bamberger: Completely agree with that, Alan. Professional golfers will go where the money is, where the glamor is, where the good courses are. If this is all rooted in sportswashing for the Saudis, time is on your side. Check this space in 2072.

The Associated Press reported Zach Johnson will be named Ryder Cup captain in the coming week. The Ryder Cupper and two-time vice captain will lead the U.S. in Rome in 2023. Good, if not expected, pick? And what will ZJ bring to the team as captain that will help the Americans win on European soil for the first time since 1993?

Zak: Like Stricker, he’ll bring years of intel from being an assistant captain. He’s steely. He won’t fret about leaving guys off the roster who might not be the right fit. He’ll make the decisions a captain makes — which aren’t all that hard — and will have no problem sticking to them. I think that’s what made Stricker look so great. He whisked on by that “Should I include Patrick Reed?” debate and never looked back.

Berhow: He definitely seemed like the next man up, so I’m good with the pick. He’s gained valuable experience and seems like a guy who won’t try to reinvent the wheel. The Americans have a great influx of young talent and a big part of the job is just motivating and putting people in position to succeed. He’s been around enough to know what’s worked and what hasn’t.

Bastable: Zach is the anti-Phil in every way. At the moment, that feels like a very good thing for all involved parties.

Bamberger: I had never thought of him as ZJ. Seems fitting.

Our How to Hit Every Shot Facebook group helped us come up with the 35 rudest things you should never do on the golf course. What’s the most annoying thing a playing partner can do when playing in your group?

Berhow: I’ve gotten randomly paired up with a few over-complimenters. Usually very nice people! But I don’t need someone to feel obligated to tell me that my yanked 2-footer was a good try or my egregiously missed green in regulation was a good swing.

Sens: Narrating your own game and offering excuses for it gets very tedious, very quickly. But nothing irritates me more than slow play. I can get very rude about it.

Bastable: Best of the day, Berhow! I’ll go with scraping up 5-footers as if they’re tap-ins, especially when that 5-footer comes directly after a 5-footer you just missed.