Tour Confidential: Can Tiger Bounce Back? And Who You Got in 2016 – Jordan, Jason or Rory? 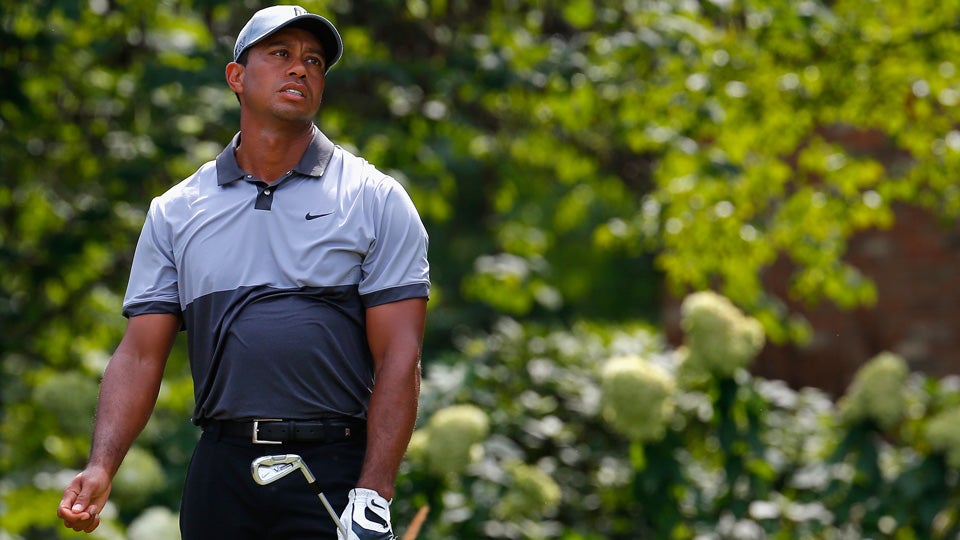 The Sports Illustrated Golf group convened a panel of experts — senior writers Michael Bamberger, Alan Shipnuck and Gary Van Sickle, special contributor John Garrity and a tour player who participated on the condition of anonymity — to tackle these and other topics.

Tiger Woods sounded resigned when he recently said that whatever he accomplished going forward would be “gravy.” What’s your take on Tiger?

VAN SICKLE: I know some people took Tiger’s acceptance of a Ryder Cup vice captain’s job and his noncommittal remarks about his return to golf as a concession that he’s done as a player. I don’t believe that. I do believe that when you’re in recovery mode and you’re not strong enough yet to even kick a soccer ball around with your kids that, yeah, you might not gush with optimism.

ANONYMOUS PRO: The summit seems so far away when you’re injured. I still believe Tiger is able to do things that others can’t, including win again—if he can get healthy enough to play 10 events. Jack won the Masters at 46. Tiger’s 100 percent could still be good enough.

SHIPNUCK: I don’t think so. The scandal changed Tiger forever, emotionally and metaphysically. He lost the mental edge, which was his greatest asset. His physical skills have eroded, and now his body is broken. Forget Jack’s record, it will be amazing if Tiger wins one more tournament.

BAMBERGER: Tiger could win, now and again. I can’t imagine he’ll ever be prepared for 18 tournaments a year the way he used to be. I can see him winning a Masters under unusual conditions—he gets a big 54-hole lead and doesn’t have to make all the six-footers on Sunday.

GARRITY: Whenever I’m about to write Tiger off for good, I remind myself that he went from having chipping yips to not having chipping yips. I don’t see why, a decade from now, a healthy Tiger couldn’t match the geriatric feats of Nicklaus or Tom Watson. Darren Clarke went a decade without a top 10 in a major, then won the British Open at 42. It happens.

BAMBERGER: It would be foolish to ever count Woods out. He’s done things that nobody in golf has ever done.

SHIPNUCK: It was weird and kind of sad last year when Tiger couldn’t break par, but he trotted out his old lines about playing only to win and being this close. He’s finally being real.

GARRITY: Tiger bought into the hokum that you should live each day as if it’s your last when, in fact, he should proceed as if he’s going to live to be 100.

BAMBERGER: It’s been so hard to say the Tiger era is over. This could be the year when we say that it came and went.

SHIPNUCK: Oh, yeah, the Tiger era is really over.

SHIPNUCK: It’s impossible to duplicate the energy that Tiger infused into the game. Watching him was a once-in-a-lifetime experience. Tiger and everyone around him made it not so fun.

VAN SICKLE: Tiger is a long shot as a comeback story. I can’t name anyone who had three back procedures and came back to be relevant. Step one is to get healthy.

SHIPNUCK: This is the official beginning of Tiger easing into an elder statesman role and embracing it. That may mean he’s not willing to pay the price to be a top player or physically capable of it. It could be an end, or it could be a new beginning.

BAMBERGER: Tiger seemed so unbelievably selfish. He’s been haughty about what golf owes him and what he’s done for golf. Arnold Palmer was Arnold Palmer for one fundamental reason—he needed golf more than golf needed him. That gave him a humility that people responded to. Tiger has never had that. Maybe he’s trying to develop it. I don’t know if he can.

What was the most significant or memorable moment from 2015?

VAN SICKLE: The most electrifying moment was when Jordan Spieth made the long putt at the 16th hole at St. Andrews in the final round. I was sure that he’d win the Open Championship and ride destiny to the Grand Slam. It was almost as electrifying when he let it slip away on the last two holes.

BAMBERGER: I’d say it was Dustin Johnson’s three-putt on the 72nd hole of the U.S. Open, which showed the ridiculousness of Chambers Bay. When you factor in the unwalkability and the course conditions, they didn’t have it together to hold a major championship, and that contributed to Dustin’s three-putt. It was squarely on the USGA’s shoulders.

ANONYMOUS PRO: Everybody was so enthralled with Spieth’s winning, but we expected Dustin to snatch it away from him after that 5-iron shot into the last green. Instead, the Grand Slam was still alive going to St. Andrews.

SHIPNUCK: Yes, that U.S. Open was incredible. I’d expand Michael’s comments to include the last hour of that championship. You had Branden Grace hitting a drive onto the railroad tracks at 16, King Louis [Oosthuizen] came in with 29—there was so much happening. Spieth won it, lost it, then won it back. The shots he and Dustin hit on the 72nd hole were remarkable. It was a dogfight.

GARRITY: If you want the most memorable image of the year, how about Matt Jones as Tin Cup hitting his second shot out of the hospitality tent at Whistling Straits, or Phil Mickelson sliding down a dune between holes on some kid’s cardboard sled? You don’t see that every day.

Which 2016 major championship looks most intriguing?

BAMBERGER: I’ll pay $5 to anybody who chooses the PGA at Baltusrol. We’ve been to newer venues like Chambers Bay and Torrey Pines and Bethpage Black, and tried-and-true venues like Baltusrol and Oakland Hills, but they just don’t stir the blood. There’s one grand dame that does—Oakmont. It’ll be hot and difficult, and players will puke their guts out and make mistakes. Oakmont has been the same since the ’20s: hard. And that’s cool.

VAN SICKLE: Oakmont is the only course I’ve played where I feel supremely pressured on every shot. You’ve got to hit the fairway, and you’re just as dead whether you miss the green or hit it in the wrong spot. Unless you have a tap-in, you’re always sweating bullets at Oakmont.

SHIPNUCK: While I’m on record as a Pebble Beach booster, Oakmont is the ultimate U.S. Open venue. You win a U.S. Open at Oakmont, it’s special.

GARRITY: I’d like to say Royal Troon because it’s so historic, but most of the holes go out and back and look like a stretch of fallen dominoes. So I, too, will go with Oakmont. It’s just nasty, and it’s a great spectator course. Oakmont delivers great championships and mostly great champions. The 1962 Open with Jack versus Arnie is one of the iconic majors, and Johnny Miller’s 63 was one of the great final rounds.

ANONYMOUS PRO: Oakmont is tremendous, guys, but the Masters is always the most intriguing major of any year because it’s first. It’s the major that Rory McIlroy wants more than any other because it gets him the career Grand Slam. Imagine if Spieth, the defending champion, has to put the green jacket on Rory. That would be cool.

VAN SICKLE: And it would send a clear message: Game on!

VAN SICKLE: Kevin Kisner has been a pesky fly buzzing around the PGA Tour, with three runner-up finishes, including a playoff loss to Rickie Fowler at the Players. Kisner finally won at Sea Island last month. His strength is his lack of any weakness. Pencil him in the Ryder Cup lineup right now.

SHIPNUCK: I’ll say Dustin Johnson. Last year he had to deal with a lot—coming back from that nonsuspension suspension, plus the baby. Going driver, 5-iron on the 72nd hole and hitting it almost stone dead under U.S. Open pressure took a lot of heart.

BAMBERGER: I saw no heart what-soever, Alan, at the British Open. Dustin was around the lead, but the final 30 holes in that wind, he mailed it in. Yes, the driver and 5-iron at Chambers were phenomenal shots, but that was pure athleticism. The hard part was the two-putt. Dustin has shown some fundamental weaknesses, but they’re ones he can conquer.

SHIPNUCK: Sam Snead wasn’t a cerebral golfer either. He got it done with physical gifts. I’d like to see if Dustin can grow into that player, but it’s now-or-never time.

ANONYMOUS PRO: I like Justin Thomas. He won this fall in Malaysia. His upside is phenomenal. He’s hanging out with Jordan Spieth, who is his friend and rival and probably the smartest player in golf. Justin just needs a little more experience and maybe to learn how to maneuver his ball in the heat of contention and not hit every shot 100 percent and rely on his power. Justin will win again, more than once. He’s the next man up, I think.

Who will have a bigger year—Jordan Spieth, Jason Day or Rory McIlroy?

SHIPNUCK: I was already bullish on Rory before he won last month in Dubai. He has immense pride. To be completely usurped by Spieth in the marketplace, in the public imagination and atop the World Ranking, I felt he’d recharge and come back strong.

ANONYMOUS PRO: Having to skip the Open at St. Andrews and not be in top form for the PGA because of his ankle, Rory realizes how big a deal that is in the early prime of his career. He has to make hay for the next 10 or 15 years, and now he knows it.

GARRITY: I’m in the Rory camp too. I think 2015 taught him a valuable lesson that he can’t take his physical gifts and his health for granted. He also put a lot of his business and managerial issues behind him, which were major distractions.

BAMBERGER: Rory will reestablish himself, for sure, but I expect all three players to come back strong. I’d be most surprised if Jason Day can continue to do what he did last summer. Jordan’s putting isn’t going to disappear anytime soon. As for Rory, he’s supertalented and supermotivated. Why wouldn’t he win one or two majors next year?

VAN SICKLE: Was Day on a hot streak last summer, or is he golf’s new Tiger Woods by combining Spieth’s short game with Rory’s length? I think it’s the former, but I hope it’s the latter. The best thing is that these guys can’t get complacent, because they’re pushing one another. Golf is all about putting, and Spieth is the best we’ve seen in decades. I’ll stick with Jordan.

GARRITY: Day could be a supernova who fades quickly. Padraig Harrington was an example of that. He won three majors in about a year but wasn’t able to sustain his play. Spieth played under such intense pressure for months, and all that scrambling and putting looked taxing to me. He might be distracted by his newfound fame, no matter how hard he tries to avoid it. It all adds up to being Rory’s time again.