Tom Lewis Flirts with 59, Settles for 62 and Lead in Denmark 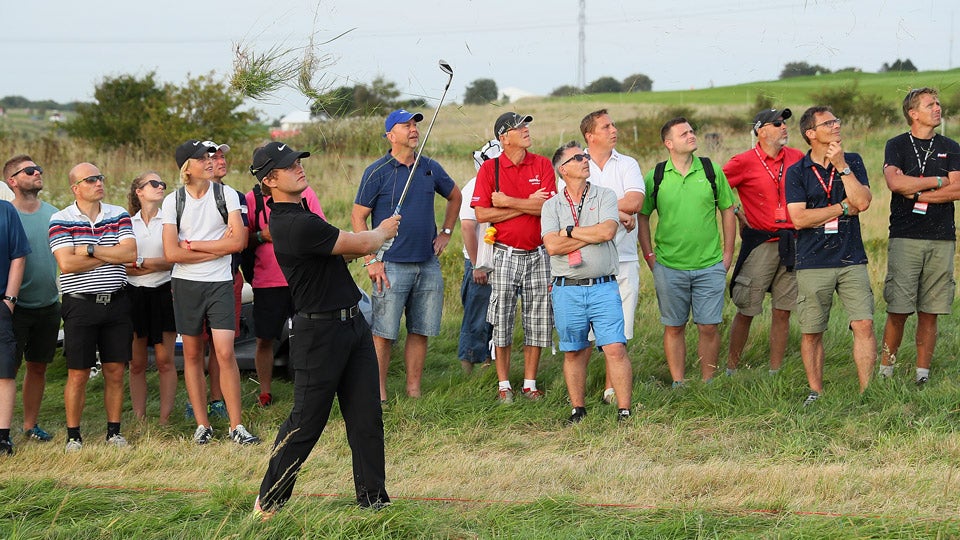 Tom Lewis during Thursday's first round in Denmark.
Getty Images

FARSO, Denmark (AP) — Tom Lewis flirted with the first 59 in European Tour history Thursday until three late bogeys made him settle for a 9-under 62 and a three-way tie at the Made In Denmark tournament.

Lewis rammed in a 45-foot eagle putt on the par-5 fourth hole to reach 12-under par through 13 holes at Himmerland Golf and Spa Resort. He only needed to play even par over the last five holes for a 59.

But he made bogey on the next hole, and closed with two more bogeys to share the lead with Thomas Pieters and Joakim Lagergren.

The Englishman still had a chance at 59 until a wild tee shot on the par-4 eighth. He could only hack out into a bunker, and he blasted out to 6 feet. His par putt was weak and missed on the low side, and he walked off the 18th green shaking his head after another bogey.

The 62 equaled the course record.

Jim Furyk set the PGA Tour record two weeks ago with a 58 at the Travelers Championship. Ryo Ishikawa shot 58 on the Japan Golf Tour in 2010. No one has broken 60 on the European Tour, with 17 players having posted a 60, most recently by Scott Jamieson at the Portugal Masters in 2013. Pieters, meanwhile, extended his good form with a potential Ryder Cup pick on the horizon. Pieters tied for fourth in the Olympics and was runner-up last week in the Czech Masters. Europe’s nine automatic qualifiers already are set for the Ryder Cup, and Darren Clarke will have three captain’s picks on Tuesday.

Pieters is among those being considered, and his opening round won’t hurt his cause.

Clarke is playing this week and opened with a 76, making it likely he will have the weekend to watch potential players. Shane Lowry, who chose to skip the FedEx Cup event in America this week to make an impression, made only one birdie in his round of 75.

Martin Kaymer of Germany, also needing a pick, started with a 69.